The Brennan Center tracked more than 425 bills[1]  in 49 states in the 2021 legislative session that include restrictive provisions, such as reducing early voting hours, imposing stricter ID requirements and limiting the number of mail ballot drop boxes. Republicans said the bills protect against voter fraud.

The voting gap between white and Black voters was at one of its narrowest points in 2000 at 3.3 points, the review found. The close 2000 presidential election between George W. Bush and Al Gore saw low turnout for both Black and white voters.

The election, which was marred by confusion over ballots and discrepancies in the counting of votes, ended up in the U.S. Supreme Court and led to significant changes, including more federal funds to update machines, same-day registration in some places and more early voting, including polls open on Sunday in some states. 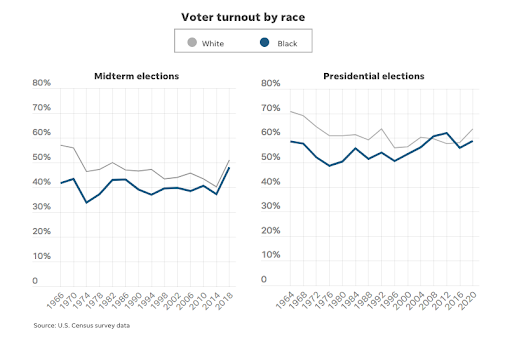 [1] Voting Laws Round Up https://www.brennancenter.org/our-work/research-reports/voting-laws-roundup-october-2021