January 6, 2022, marked a dark day in American history — the first anniversary of the Trump-backed Insurrection and invasion of the U.S. Capitol. Many Democrats — and only a handful of Republicans — marked the occasion solemnly and honestly.

The disgraced, twice-impeached former president, who continues to promulgate the Big Lie that the 2020 election was “stolen” from him, marked the anniversary just as one would expect, by sending out a press release (since he can’t tweet) filled with misinformation.

New reporting has also showed that anti-LGBTQ+ ideology was running rampant at the Insurrection. Among those who have been charged so far for their participation in the riot is a slew of leaders in the anti-LGBTQ+ movement. They include Owen Shorter, a host of Alex Jones’ InfoWars; Mark Sahady, vice president of the far-right group Super Happy Fun America; Gina Michelle Bisignano, best known for shouting anti-gay slurs at an anti-mask protest; Suzanne Ianni, operations director of Super Happy Fun America; and Kevin Tuck, an anti-LGBTQ+ YouTuber.

On the side of the Democrats and “future former Republicans,” to borrow a phrase from Transportation Secretary Pete Buttigieg, are people like David Cicilline, the openly gay congressman from Rhode Island who was an impeachment manager during the former president’s second impeachment trial.

In an interview with The Hill, Cicilline recounts what it was like to work in Congress during the Insurrection and how it inspired him to start working on the second impeachment. He said that California Congressman Ted Lieu “came into my office because he had been evacuated from his office building.” As they watched the violence on TV, they started “writing what the articles of impeachment would actually look like.”

During the impeachment trial, Cicilline said, “The president of the United States sided with the insurrectionists. He celebrated their cause. He validated their attack.” And while many Republican legislators on that day said the former president was responsible, they have backtracked out of fear — placing partisanship and power over democracy and peace.

The differences between the two political parties has never been starker. Please keep that in mind as you register to vote in this year’s elections. Democracy hangs in the balance.

(Let us know what you think about anything you read in the Newsletter. Or let us know if there’s something we should cover. Email us your feedback to [email protected].)

In the news: New ambassadors, transgender veterans, and Clay Aiken

As the calendar turned to 2022 and the Democratic Party began to gear up for midterm elections, the Biden Administration continued to make positive moves for the LGBTQ+ community.

On the appointment front, Rufus Gifford, who was confirmed last month by the U.S Senate as the State Department of chief of protocol, was sworn-in January 4 for the role. This means he will be influential on foreign policy within the Biden Administration. The chief of protocol for the State Department is responsible for being on the frontlines of engagement in U.S. foreign policy, meaning acting as the liaison between foreign leaders and the president.

“Today, with my right hand in the air, my left hand on an American flag which flew over Embassy Copenhagen given to me by the Marines five years ago, my wonderful husband by my side and my head and my heart full of emotion I took the oath to serve as Chief of Protocol of the United States with the rank of Ambassador,” Gifford, a former ambassador to Denmark in the Obama Administration, wrote in a public Facebook post. “An honor like this so rarely comes around — let alone twice — and I promise to serve with dignity, respect and heart.”

On December 21, the U.S. Senate confirmed Christopher Lamora as ambassador to Cameroon. That means Lamora, who is gay, would be sent to a country where homosexuality is illegal.

In a statement to the Senate Foreign Relations Committee last June, Lamora thanked his husband, Eric, and addressed some of the “significant challenges” he said Cameroon currently faces, including an increase in violence in certain areas. “No one undermining peace in Cameroon has our support or tolerance,” he said, “whether members of the security forces or of armed separatist groups.”

The U.S. Agency for International Development (USAID), an independent agency of the federal government, has appointed Jay Gilliam to lead its global LGBTQ+ initiatives. He was previously the director of the Human Rights Campaign’s Global Program. Gilliam’s position, senior LGBTQI+ coordinator, is within USAID’s Bureau for Development, Democracy and Innovation. He told the Washington Blade newspaper that he has “an open line to” USAID Administrator Samantha Power, who is known as a vocal champion of LGBTQ+ rights.

In a move to support transgender American veterans, the Biden Administration will now allow trans and non-binary vets to identify as they choose on their medical records.

The Department of Veterans Affairs announced on January 12 that gender options on forms will now include transgender female, transgender male, non-binary and other. Veterans can also choose a preferred name.

“All veterans, all people, have a basic right to be identified as they define themselves,” said VA Secretary Denis McDough in a statement. “This is essential for their general well-being and overall health. Knowing the gender identity of transgender and gender-diverse veterans helps us better serve them.”

This is the latest change for the VA since McDonough took office in February of last year and created a task force to make the agency more LGBTQ inclusive. “We recognize this work requires a culture shift and will not happen overnight, but the Biden-Harris Administration and I will see this through to completion,” McDonough said in a statement.

Transportation Secretary Pete Buttigieg, his husband Chasten and their infant twins Penelope and Joseph welcomed the new year — and broke the Internet — with a new photo on social media. The caption read: “2021 brought with it many challenges, but it also gave us a lot to be grateful for. #HappyNewYear, friends. Here’s to a peaceful and joyful 2022!”

In a December 20 tweet, Pappas wrote: “We said yes! Vann and I are thrilled to share the news of our engagement and look forward to a lifetime of happiness and togetherness.”

Pappas, along with the rest of the House of Representatives, will be up for reelection in November. LGBTQ+ candidates, both incumbents and challengers are readying their campaigns across the country.

Perhaps the most well-known LGBTQ+ congressional challenger will be Clay Aiken, the “American Idol” runner up who unsuccessfully ran for Congress in his native North Carolina in 2014. He refers to himself as a “loud and proud Democrat.”

“I intend to use my voice to deliver real results for North Carolina families, just like David Price has done for decades,” Aiken, a native of Raleigh, stated on his new campaign website. Price, the Democrat who currently holds the seat, is not running for reelection.

“I’ll always stand up for my principles and fight for inclusion, income equality, free access to quality healthcare, and combating climate change,” Aiken stated. “In Congress, I’ll use my voice to advocate for common-sense policies that encourage continued job growth and healthy communities.” 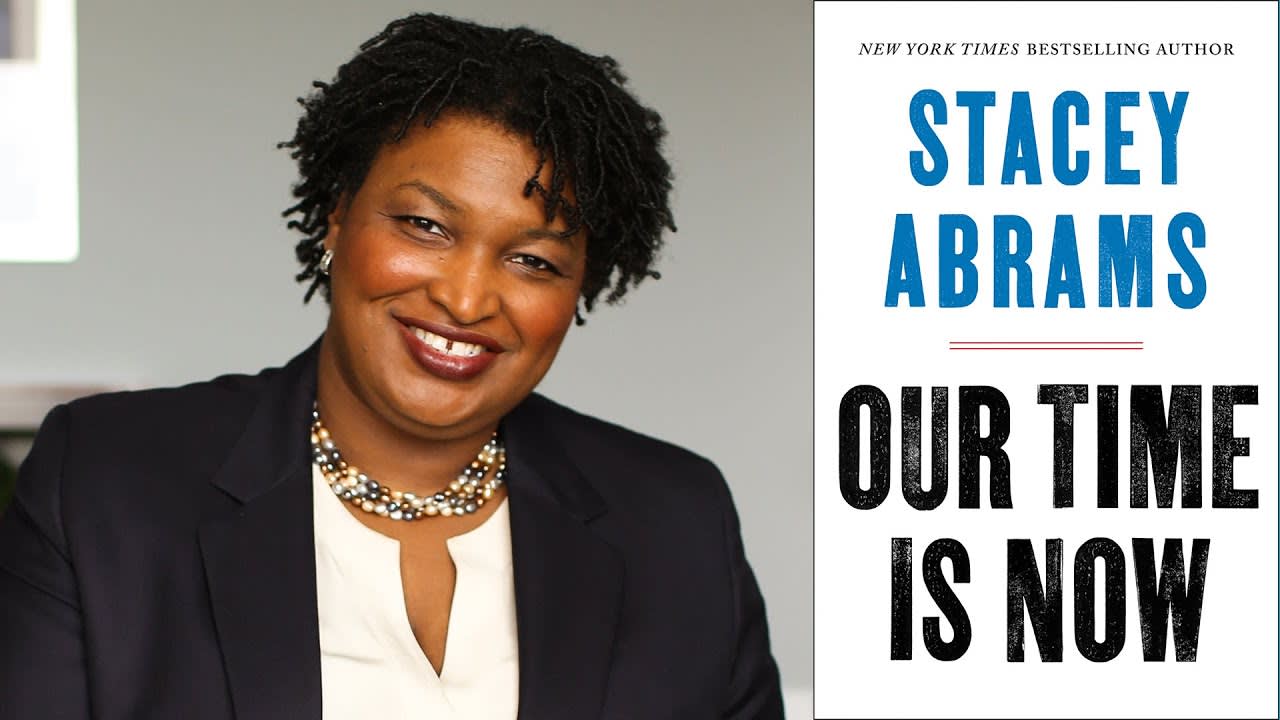 Celebrated national leader and bestselling author Stacey Abrams offers a blueprint to end voter suppression, empower our citizens, and take back our country. A recognized expert on fair voting and civic engagement, Abrams chronicles a chilling account of how the right to vote and the principle of democracy have been and continue to be under attack. Abrams would have been the first African-American woman governor, but experienced these effects first-hand, despite running the most innovative race in modern politics as the Democratic nominee in Georgia. Abrams didn’t win, but she has not conceded. The book compellingly argues for the importance of robust voter protections, an elevation of identity politics, engagement in the census, and a return to moral international leadership.
Our Time Is Now draws on extensive research from national organizations and renowned scholars, as well as anecdotes from her life and others’ who have fought throughout our country’s history for the power to be heard. The stakes could not be higher. Here are concrete solutions and inspiration to stand up for who we are―now. 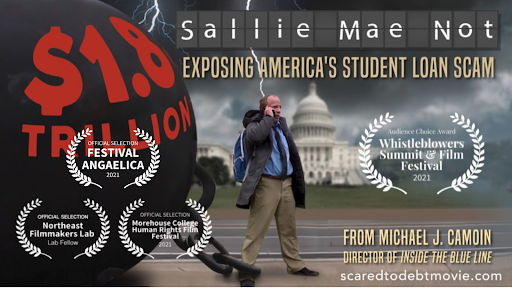 Currently, 45 million borrowers are saddled with close to $1.9 trillion in federal student loan debt in the United States. The Biden Administration has extended the CARES ACT payment pause until May 1, 2022. Many borrowers perceive the decision as kicking the can down the road. They remain victims of predatory loan practices within a corrupt system that profits while increasing their debt far beyond their ability to pay it.

View the award-winning Sallie Mae Not documentary, episode one of the Scared to Debt documentary film by Michael Camoin, and join him and others for a panel discussion to learn the chilling reality of student loan corruption in America and options to confront it effectively.

Watch the film in advance on your own (January 27-31) via the easy access link you will receive when you RSVP below. The film is 41 minutes long. No fee/donation is necessary. RSVP below for your free film screening access, panel discussion Zoom link, and invitation to submit a question for the panel discussion. Invite your family and friends to participate as well. Here is a Facebook post to share. Help get out the vote for Democrats, including Congressional Progressive Caucus Members who are committed to student debt relief for borrowers in the United States. If you are able, please consider a donation of between $4.50 and $45 to help us reach our goal of 45 donations in recognition of the 45 million American student debt borrowers.

February 26
8-10pm Berlin Time
“Born on the Edge of Race and Gender: A Voice for Cultural Competency” with author Willy Wilkinson 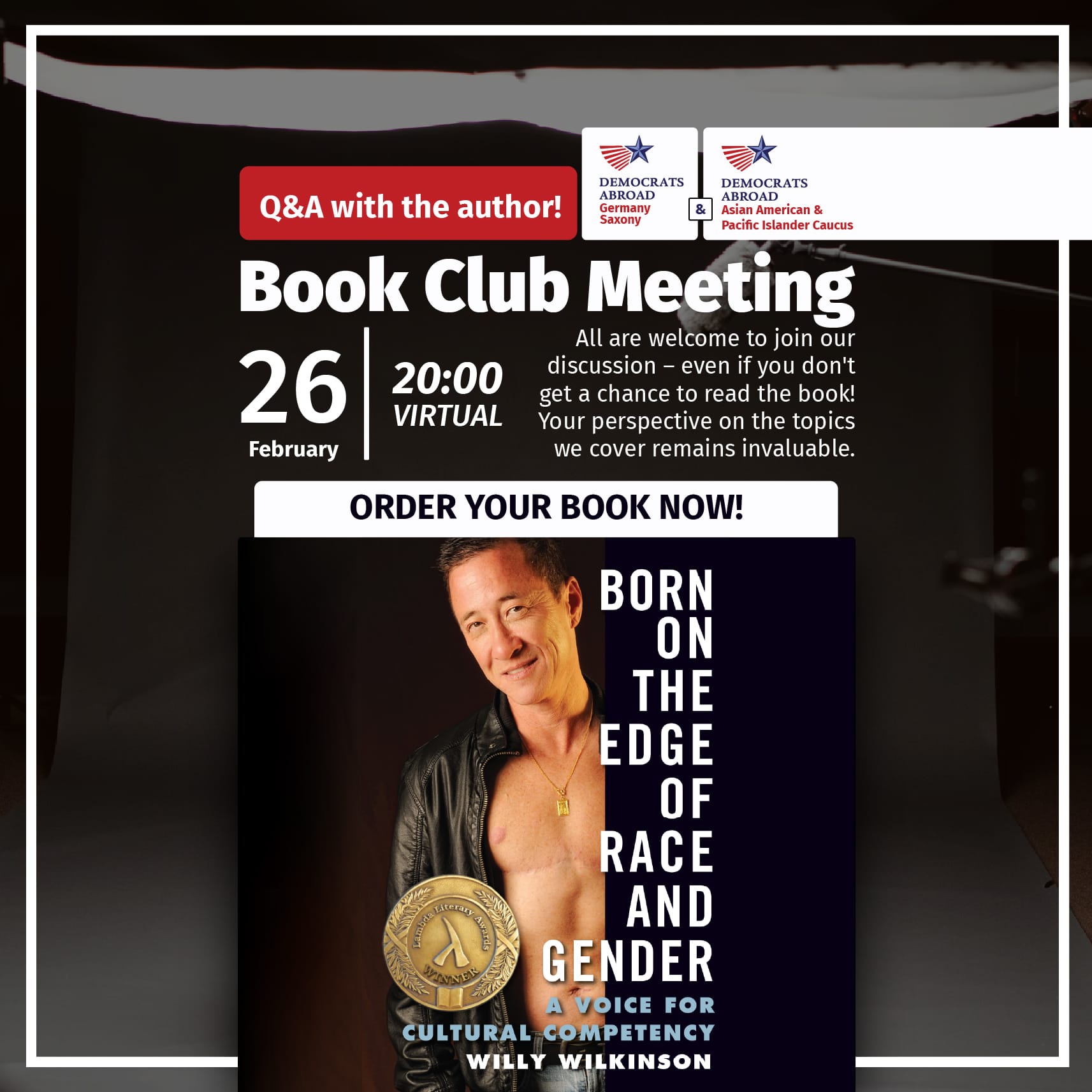 Help us report on key events related to the Democrats Abroad LGBTQ+ Caucus both at home and abroad.

What does being a reporter involve?

• Good writing skills
• Meeting via Zoom once a month (usually the 2nd or 3rd Thursday) for an hour (12.00 or 13.00 EST) with the Newsletter team
• Viewing the LGBTQ+ events during the month assigned to you and writing a 800-1000 word report
• Submitting contributions by the deadline date
• Being a member of DA LGBTQ+ Caucus

If you are interested in being a reporter and member of our Newsletter team, email [email protected] with the subject “Newsletter Reporter” and tell us about yourself, your experience and why you’d like to join our team. We look forward to hearing from you.