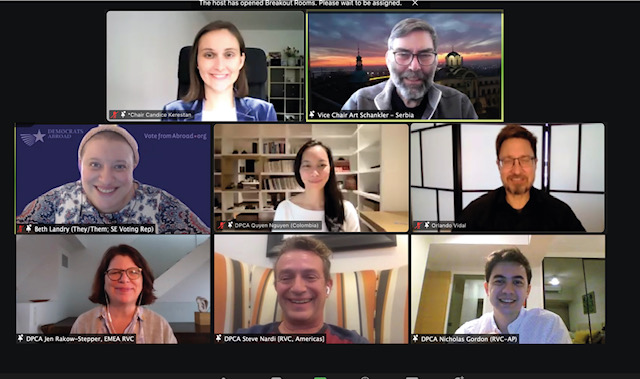 About a dozen of the 25 resolutions passed (see below), with the rest tabled for a later meeting. We also voted that next year’s global AGM will be held in-person in Costa Rica!

A 20-hour Zoom meeting can be exhausting for attendees, but even more for those who are facilitating sessions for hours and hours on very little sleep. A huge thank you to all those who led us through the sessions on the bylaws and resolutions, as well as a big shout out to members of the outgoing International Executive Committee, especially our former Chair Julia Bryan, who was the epitome of poise, patience, and cool during the AGM.

Bylaws and Resolutions at the Global Meeting

At the Global Meeting, the Democratic Party Committee Abroad (DPCA) body debates and votes on proposed Bylaws amendments and Resolutions. Following are the Bylaws and Resolutions that passed or were sent to committee. There was not enough time to hear all the Resolutions and another meeting will be set for the DPCA voting representatives to hear and consider them.

Bylaws Amendments that were referred to committee: