I personally did not know anyone who went to Vietnam, but my husband and I and our three children did host a number of American draft dodgers who arrived in Toronto during the Vietnam War. The Toronto Anti-Draft Program (TADP – I used to call it “Tadpole”) came into being in the late 1960s. Since we had been protesting the Vietnam War in the Boston MA area, we gravitated to that group when we immigrated to Toronto on November 8, 1969. 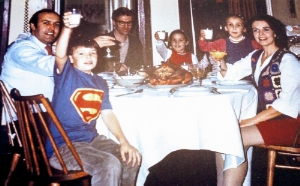 During our first trip to Toronto in August, 1969, to visit my husband’s brother, who was attending the University of Toronto, we investigated the possibility of transferring within my husband’s company from Boston to Toronto. With our three children, at that time in grades one, two, and three, we drove a U-haul filled with our belongings, including a bowl of goldfish, to the Canadian border. Since we had arranged for the transfer, rented out our home, and said our “goodbyes,” it seemed like the thing to DO. Determined as we were, we did not even take the exit on the NY Thruway that day in 1969, when we could have gone to Woodstock instead of to Toronto. In August, we visited our sites and, after our stay with my husband’s brother’s family, we rushed back home to plan our return by November 8, the date of my birthday. At the border, the Canadian agent proclaimed: “We have a landing! We have a landing!” They also gave us little slips of paper; mine is still in my wallet.

As we settled into our rented home in Mississauga, we continued to support efforts against the war, especially by accepting the draft dodgers who were more and more arriving from the U.S. I remember one couple who arrived on our doorstep in the middle of a winter storm with only a black garbage bag filled with their belongings. I’m pretty sure that they said that they were fromGeorgia. They stayed with us for a couple of weeks until more permanent arrangements could be made. Years later, I met a lawyer who had been one of the thousands who came across the border during those times. He then went to school at Dalhousie in Nova Scotia. He said that coming to Canada had been the best thing that he had ever done. As a family, we did what we could to end the war. I’ve read that approximately 50,000 Americans came to Canada during the Vietnam War. “If everyone would light just one little candle…”

I met Ken Sherman when there were only about five of us on the Democrats Abroad Toronto board of directors group. At that time, he had already spearheaded efforts that today have so magnificently evolved. When we handed out literature outside a Bill Maher show at Copps Coliseum in Hamilton, he was costumed as Uncle Sam, and I was the Statue of Liberty. Bill used the “f” word in his show many times, but he was still hilarious. I went on to become a Canadian in 1986, and I hold two current passports. I and my three children are citizens of both countries, as are my two grandchildren. I am able to vote in both countries, and I DO!

In the 1990s, I got involved in demonstrations in Maine, specifically, at Bath Iron Works in Brunswick where Aegis destroyers are built – they launch nuclear warheads. Philip Berrigan spent time in jail because of those activities and was put on trial. I remember that a high-profile lawyer came from the Hague to defend him, but the lawyer was not allowed into the courthouse. I became motivated to engage again in anti-war work because of a friend of mine who knew Mr. Berrigan. My later anti-war work was against the Iraq War. As a New Englander born in New Hampshire, I still believe in this motto: “Live free or die.” As Ken Sherman recently told an interviewer: “It is still true that social change comes through grassroots and political organizing.”

In the biography I wrote for the 50th anniversary of my graduation from Laconia High School, I said: “In other locations (such as Boston in the 1960s, Portland and Bath, Maine, in the 1990s, and Orangeville, Toronto, and Hamilton, Ontario, in the 2000s, she might have been seen demonstrating for peace. That work includes promoting absentee voter registration of Americans worldwide.”