The Democrats Abroad Canada Black Caucus (DACABC) is made up of DACA members of all ethnicities in Canada who are willing and able to advocate on issues important to Black Americans within the United States of America and those living abroad.  All DACA members are eligible to join the DACABC.  We advocate for laws, policies, and programs that improve the lives of Black Americans and educate all people on the humanity of Black people.
People of visible African descent have been in what we now know as the United States of America since 1619, long before many ethnic groups who are now considered to be White. Black Americans were essential to building America. Without Black people, the greatness of America would not be possible. Today, Black Americans are in all walks of life and are 13.3% of the American population. By 2060, the projected Black population in the United States will be 74.5 million, with a predicted median Black wealth as of 2053 of zero and a current median White wealth of $116,000.
According to the Voter Participation Center, from 2012 to 2016, Black voter turnout dropped by 4.7% overall. Black voter turnout is essential for Democratic election victories. Therefore, it is necessary for Democrats to identify and focus on those issues close to the hearts of African Americans and other minority voters. In general, voters do not turn out unless they feel included, listened to, and excited. It is important that DACA have a caucus that directly addresses the issues of Black Americans in Canada. Thus, the DACABC will produce and disseminate political content which bears witness to the ever-unfolding international history of the Black American reality. Black Lives Matter!

The DACABC will provide a forum for all DACA members to better understand the issues and concerns affecting Black Americans, to help eliminate unconscious bias within the DACA membership and in America, to help engage with Black voters living in Canada and ensure that their needs are met within the DACA community, and, where needed, to advocate for reforms to political issues. We encourage and facilitate Black Americans in Canada to engage, become informed, and exercise their voting rights.

⦁    To support and defend the Constitution of the United States against all enemies, foreign and domestic.
⦁    To support the goals and ideals of the Democratic Party and Democrats Abroad Canada.
⦁    To encourage voting in every eligible U.S. election by as many Black Americans in Canada as possible.
⦁    To advocate on issues of concern to Black Americans in Canada.
⦁    To be a voice for Black U.S. citizens living in Canada.
⦁    To support campaigns of Democratic candidates aligned with our interests running for elected office in the U.S.
⦁    To work as a duly-constituted entity within the Democrats Abroad Global Black Caucus.
⦁    To work with other teams within DACA to further our joint goals.
Canada Black Caucus(CABC) Shall:
⦁    Build on the strong foundation which has been laid out by the previous Chair.
⦁    Assemble a diverse and inclusive CABC steering committee.
⦁    Increase CABC membership in Canada.
⦁    Fundraise donations, which are to the Democrats Abroad (Democratic Party Committee Abroad - DPCA) and not to any candidate for Federal Office.
⦁    Utilize the power of intersectionality by working closely with other DA caucuses & DA teams.
⦁    Coordinate with the Global Black Caucus (GBC) and other Black Caucus Country Committees (BCCC).
⦁    Facilitate Bridge Builder Program.
⦁    Coordinate and streamline the social media channels.
⦁    Encourage all members of Democrats Abroad, independents, and other left-leaning, progressive U.S. citizens, and other U.S. voters at home and abroad to support Democratic interests and the well-being of Black Americans.
⦁    Post on social media items relevant to the direct interests of DACABC, including: promoting the Global Black Caucus; encouraging Americans abroad to join DA; reminding newly eligible U.S. citizens to register to vote; reminding all U.S. citizens to exercise their right to vote; opposing legislation harmful to Black American interests, and so forth.
⦁    Find speakers for town halls to raise awareness.
⦁    Contribute periodically to GBC and/or Country Committee newsletters.
⦁    Monitor other organizations’ actions advocating in support of (or in opposition to) issues or legislation affecting Black Americans.
⦁    Consider the impact and policy recommendations of scientifically/validated research as it relates to Black Americans.

1 “QuickFacts.” U.S. Census Bureau QuickFacts Selected: UNITED STATES, United States Census
Bureau, 1 July 2016, www.census.gov/quickfacts/fact/table/US/PST045216.
2 Fraga, Bernard L., et al. “Analysis | Why Did Trump Win? More Whites - and Fewer Blacks - Actually
Voted.” The Washington Post, WP Company, 8 May 2017
3 In these times where assaults on constitutional rights are routinely taking place and there are many forces who are actively working to call a constitutional convention and change our rights, it is important that every American defend our constitution, not just those who work for the government. 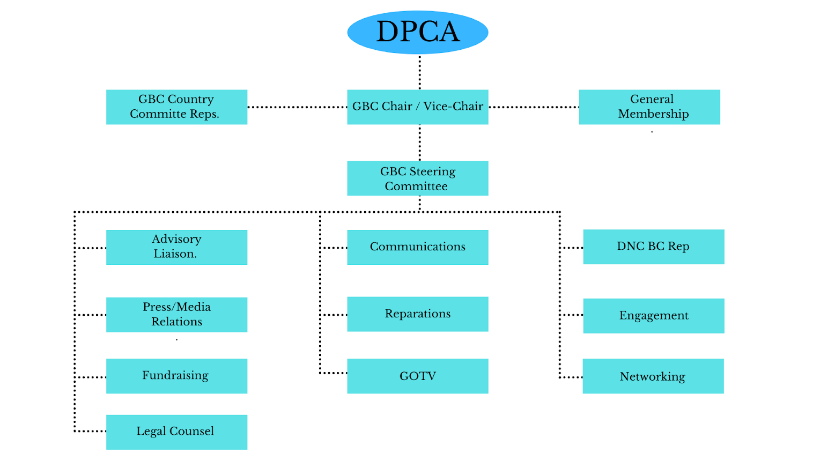