Known fondly during her time as the Brown Bomber of Sophisticated Rhythm, Gladys Bentley was an openly lesbian and butch-presenting blues musician who rose to fame during the Harlem Renaissance of the 1920s and 1930s. 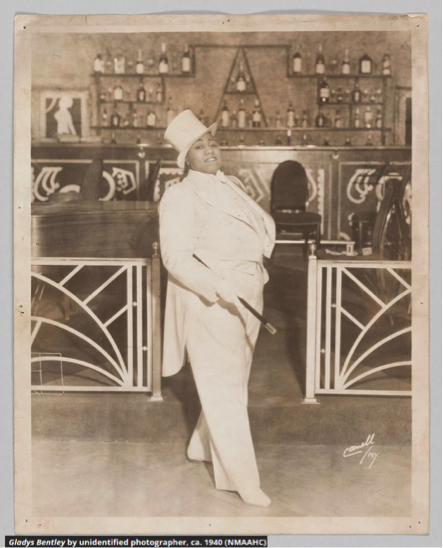 She challenged gender norms in both her personal and musical style. Bentley donned traditionally male clothing, including what became her signature white top hat and matching tuxedo. She declared her homosexuality openly in songs in a way that confronted male entitlement and proclaimed her own sexual independence.

Bentley’s career as a singer, pianist, and entertainer blossomed during prohibition-era New York. She began performing in men’s attire at Harry Hansberry’s Clam House, a notorious gay speakeasy in Harlem, when she heard the club needed a male pianist. In the 1930s, Bentley headlines at Harlem’s Ubangi Club, where she performed with a chorus line of drag queens.

Her shows were a runaway success. For a time, Bentley was one of the most famous black entertainers in the US. In his autobiography from 1940, Langston Hughes said, “Miss Bentley was an amazing exhibition of musical energy — a large, dark, masculine lady, whose feet pounded the floor while her fingers pounded the keyboard — a perfect piece of African sculpture, animated by her own rhythm.”

Gladys Bentley on “You Bet Your Life” with Groucho Marx

However, when prohibition was lifted and the Great Depression began, Bentley’s mainstream success waned as tolerance of her gender-bending performance waned. The rise of McCarthyism during the Red Scare of the 1940s and 1950s further took its toll on Bentley as homosexuals, particularly artists, became a regular target of attack by political elites. Despite being openly lesbian and embracing of her more butch qualities earlier in life, Bentley began dressing in traditional female clothes, claimed to have married men on two separate occasions, and took courses of hormone treatments to “cure” her homosexuality.

Bentley sadly died aged 52. Her legacy and style that propelled her to fame during the Harlem Renaissance were a testament to her talent as a performer and LGBTQ+ trailblazer. She was, undoubtedly, a gender outlaw ahead of her time.