LGBTQ+ Voices: An interview with Shannon Linehan from DA Canada

Democrats Abroad has had a strong presence at Toronto Pride in recent years, and it has been a valuable opportunity for the chapter to engage members and support the community. Shannon Linehan, a New York voter in the Toronto chapter, notes that DA has been a fixture at Pride, staffing a booth and even taking part in the parade itself. Like many cities, Toronto was forced to cancel their in-person Pride celebrations during the COVID pandemic, and Pride events will be held virtually for another year. Though the chapter is unable to take part as it has in the past, Shannon and other volunteers in Toronto experimented with an array of creative programs to keep members engaged and further LGBTQ+ and social justice initiatives locally. 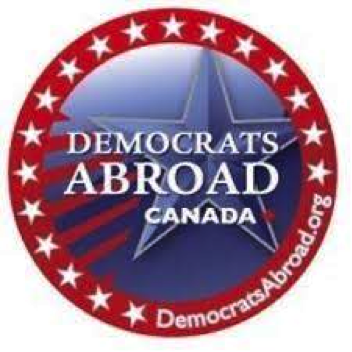 “We hosted a virtual movie-watching event about the life of Marsha P. Johnson, a documentary on her activism and work,” Shannon notes, and the group even coordinated a virtual dance party DJed by one of the chapter’s own members last June. Operating virtually in the pandemic has made international collaborations possible, Shannon says, and they partnered with the DA chapter in Amsterdam to host a similar event across continents. The Toronto chapter also hosted “Pints, Pixels, and Politics,” a virtual program with a guest speaker from Showing Up for Racial Justice. “The idea is that you have an expert speaker come and talk,…someone can bring a drink if they want to, and the pixels” ties in the virtual format.

Shannon is looking forward to coordinating similar programs with some kind of LGBTQ+ focus this year as well, and planning is already underway. This June, the Toronto chapter will host a panel discussion about trans rights and activism that will feature Taylor Small, recently elected in Vermont as the state’s first openly trans representative. The Trans Chorus of Los Angeles, which performed at the inauguration in January, will also be taking part, Shannon says. Additionally, as the region is so large and is home to many Americans, the chapter will be involved in virtual pride events in the neighboring York and Durham areas, deepening its connection to the LGBTQ+ community outside Toronto.

“After a year of all this, people are burnt out from being on Zoom,” Shannon says, and “what works with Pride in person doesn’t really translate” to an online format in all cases. Though some of the programs the Toronto chapter coordinated last year went well, “maybe a speaker or workshop…or tax seminar” would be beneficial, as “people are really engaged…when there is something relevant to them” and their own situation. “We were talking about doing an immigration workshop,” Shannon explains, as “how to go about applying for permanent residency for same-sex couples” or navigating cross-border relationships are relevant issues for many. The chapter is already planning to host a virtual workshop for Canadian/American couples as a part of their Pride events this year.

Shannon joined her wife in Canada in 2018 after maintaining a cross-border relationship for several years while she was a student. “I ended up in Buffalo but met my wife here (in Toronto). We did the back and forth for a while, and that is how I ended up here permanently,” she says. Though she has been involved with Democrats Abroad for several years, Shannon began helping coordinate LGBTQ+ events over the last year and was even recently elected as a member-at-large of the Toronto chapter board. The group has already started planning and recently held an open forum for local caucus members, Shannon says, “a drop-in where people can come and share what they want to see [and] use that for a starting point for doing things throughout the year as well, not just during Pride.”

As the Toronto chapter finalizes its calendar, details will be posted on their website at https://www.democratsabroad.org/ca-toronto_events.