Anya (she/her) is a 22-year-old New Orleans voter, studying medicine at Leipzig University in Germany. She is passionate about maternal and LGBTQA+ health. She ran as a Bernie delegate because she, like many young people, has been deeply inspired by Bernie's politics. Writing that being a part of “this delegation means to work with people who care about that change - to work with young, of color, LGBTQA+ people who care deeply about their communities”. 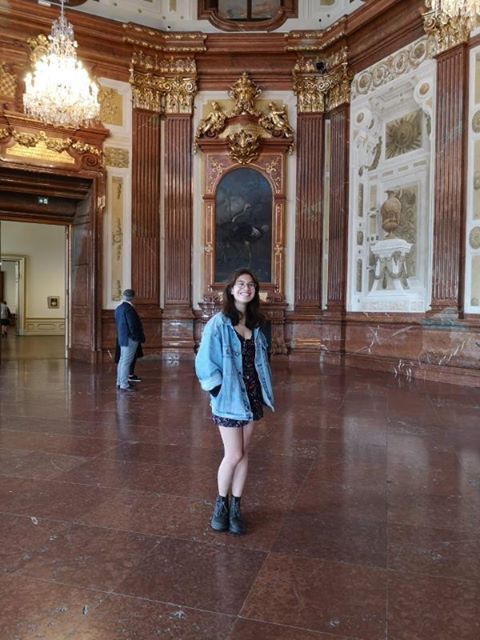 While there are many issues that are important to both delegates, Medicare For All has shifted to the forefront of their fight to solidify a progressive shift within the platform. Both point out that as Americans abroad many of us have experienced the advantages of a single-payer healthcare system. We have also seen growing support in the US for single-payer systems, with 46% of Republicans, 66% of Independents, and 88% of Democrats in favor. Yet the proposed 2020 party platform embraces the current Affordable Care Act while adding a public option to provide coverage with no co-pay. Low-income Americans would be automatically enrolled without premiums and the enrollment age for Medicare would be lowered to 60. Read the platform here.

In a series of passionate emails to fellow DA delegates, Ty, Anya, and fellow progressive caucus delegates organized and urged others to vote no on the DNC platform. The move to vote no on the platform is led by the Chair of the Nevada Delegation Judith Whitmer. Alongside others, 15 DA delegates have publicly announced they are voting no unless Medicare For All is included - more than half of our delegation. Ty and Anya both discovered the petition on a Bernie Facebook group and began spreading the petition among group chats. Ty contacted the Nevada delegation leader, Judith Whitmer, and then began a ‘deputy whip’ initiative, with the objective of mustering up support to vote against the platform. Anya started working within the youth delegation to get signatures for the petitions. Anya, Ty, and other passionate delegates have been able to reach over 800 delegates and worked to help others resubmit their ballots.

Why is the inclusion of Medicare For All so important? First, it is essential to understand what the platform is. In the American system, political parties organize at local, state, and national levels, and every four years hold a national convention. During which the presidential and vice-presidential candidates are nominated, and the party platform is voted on. The platform outlines the party’s set of principles, goals, and strategies for addressing specific issues. The platform is voted on by the Democratic National Convention delegates,

and acts as the aspirational direction the party will take on policy. During an in-person convention, the platform and any amendments are voted on in real time by a voice vote. This year the convention is online, with delegates submitting ballots by email to their state delegation chair, who submits a tally sheet. The outcome will be announced during the convention.

Ty and Anya passionately stood up when Medicare For All was not included. Ty argues that “as it stands now, it will be very hard to fight for a position that is not included in our platform. In fact, there's a pretty good chance that whatever is passed by even a majority Democratic congress may be more conservative than what is in the current platform”. Anya continues “we should be looking beyond our current system of competition and profit and boldly reimagine healthcare in the United States”.

Both argue that the inclusion of Medicare For All goes beyond the platform and to the basis of inequality in America. They point out that the current system disproportionately disadvantages BIPoC and those in the LGBTQ+ community. “Healthcare is a human right, and it is an objective truth that our current system is unequipped to respect that right,” says Anya, who brings forth parallels with the private healthcare system in Germany. The German system, similar to the American system, creates inequality in both medical coverage and treatment. Ty agrees by stating that “for me, this isn't about policy. It's about needless deaths and healthcare equity for Black and Brown people in the richest country in the world”.

Both Ty and Anya are young and passionate about their activism. “I didn't wake up one morning and decide that I would fight against the platform, or that I was now anti-establishment. I think I just observe things as I observe them, and then try to stick to the truth in my advocacy” says Anya. Ty, whose role as “deputy whip” put them at the forefront of the campaign, says they are “proud to say the majority of our 'deputy whips' fall into the DNC's Youth category, meaning they're 35 and under. I take that to mean we're fed up and passionate about making well overdue changes to the DNC and our country”.

After engaging with delegation members organizing to insert Medicare for All in the platform, many Democrats Abroad delegates still chose to vote yes. LGBTQ+ Caucus Chair Martha McDevitt-Pugh, an automatic delegate to the convention, voted for the platform. She stated, "after passionate discussions in our delegation about the platform, I voted to approve it. The party platform declares who we are and what we stand for. We can hold all Democratic leaders accountable for what is in the platform, which highlights the most important issues as we see them now. In the right environment we can achieve even more. That's why winning the presidency and a majority in congress and the Senate is critical”. She continued by saying that Republicans have been working diligently for years in an effort to strip away healthcare coverage, with no program to replace it. And while we’re in the midst of a global pandemic, the Trump administration asked the Supreme Court in June to overturn the Affordable Care Act. With the Republican Senate refusing to take up bills passed in the Democratic House of Representatives, Martha emphasizes that electing a Democratic Senate is necessary to forward the promise of healthcare for all: “I’m grateful for the organizing by our delegates to highlight that healthcare reform cannot wait. It inspires me to do all I can to turn red Senate seats blue in November.”