It is Meet the Team Monday!  Today, we continue our blog series with an interview with our National Treasurer - Brooke Burns. 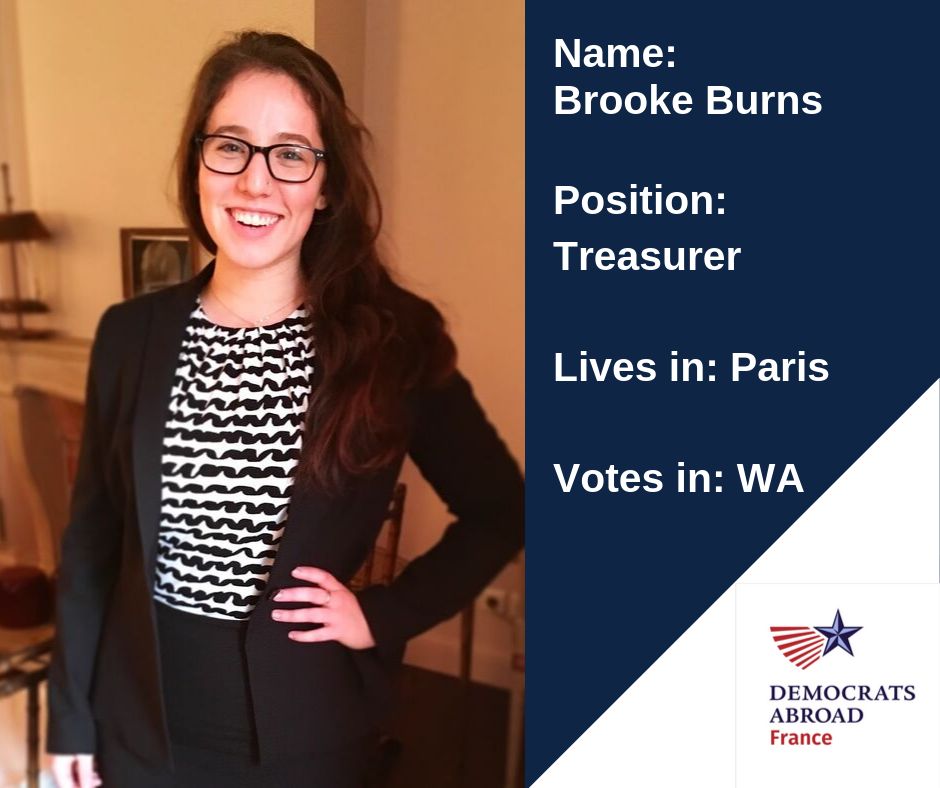 Brooke Burns is the National Treasurer for Democrats Abroad France (DAF), and has been successfully managing DAF’s resources for the past two years. In addition to organizing national resources, Brooke maintains positive working relationships with all the DAF chapters. Her most recent project centered on digitalising the financial processes for members, events, and GOTV efforts.

Brooke had been an election volunteer in her home state of Washington since before she could vote. “My first political memories were voting at Challenger Elementary School with my mother and skipping school to volunteer as a poll judge for Obama's 2008 election at the last in-person voting year in Washington State before the implementation of electronic voting,” Brooke explained.

So when she moved to France to work in communications, she sought out local political volunteering opportunities and found DA France.

“I was volunteering with my legislative district (WA-5!) while living abroad, and it became too much/overwhelming to manage. So, I googled local political volunteering opportunities and DA appeared, with enough time before the elections to submit a candidate statement.

I emailed Sheila (Malovany-Chevallier), I think, telling her that I wasn't sure that I had the experience to be the treasurer but I'd be happy to help whoever was elected. She wrote back, simply, 'if you want to run, run!' and so I did.”

It is Meet the Team Monday!  Today, we continue our blog series with an interview with our National Database/IT Manager - Max Dunitz. 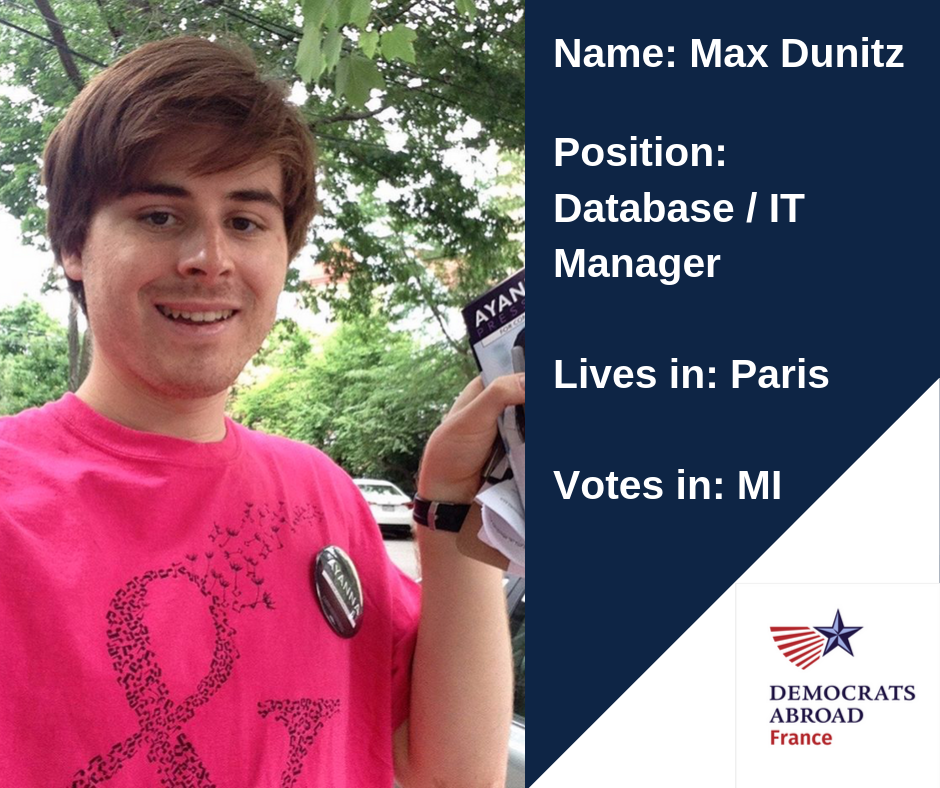 Max Dunitz is the National Database / IT Manager for Democrats Abroad France (DAF), where he synthesizes voter engagement efforts and IT support.

After arriving in Paris to pursue graduate studies in applied math at ENS Paris-Saclay, Max joined the DAF Youth Caucus and helped create a Voice Over Internet Protocol (VOIP) infrastructure for our phone banking campaigns.

“The week before moving to France, I was asked to sign up for next week's shift after canvassing and panicked, so I reached out to DA France leaders to see how I could help boost midterm turnout from France,” explained Max. “I found it very easy to get involved; DA France is very active, and the leadership was able to help me find ways to harness my election jitters into a productive force for boosting turnout.”

As an avid volunteer, Max has “performed just about every task at a Democratic field office.” He has held leadership positions in progressive activist groups such as Fossil Free MIT, Sunrise Boston, and Cambridge Area Stronger Together.

“Although I prefer campaigning to sitting in front of a computer, I am always happy to put my computer science degrees to use for a good cause!”

Now, on to Max’s fun facts:

And when asked who his favorite political icon was, Max responded:

“Not to be all Time-in-2006, but YOU! The practice of politics involves not personalities but...practice. Call your reps, attend meetings, talk to your neighbors, canvass, phonebank, text, write postcards, bake delicious snacks for volunteers, clean the field office, work spreadsheets, demonstrate, and RUN FOR OFFICE. As José Mujica, a politician who is quite the icon, said, power comes not from above but from the hearts of the masses.

Ashley Bennett, a county legislator in New Jersey, was not a politician until she saw a sexist Facebook post from the incumbent and decided to show that her rep did not reflect her community's values by winning his seat. Few of us can make the time to run for office. The volunteers who powered Ashley's victory are as much of a politician as she is, and their stories are every bit as inspiring.

Trump is a danger to the republic, and ordinary people--particularly, middle-aged women--are responding to this assault on our institutions, conscience, and sanity by getting involved in ways big and small, and that's far more inspiring than any great orator can ever be.”

We thought that it would be helpful to introduce our members and friends to the Democrats Abroad France National Leadership Team.  Today, we start with our National Chair, Ada Shen.

Ada Shen is the National Chair of Democrats Abroad France (DAF),where she leads the national strategy for mobilizing the overseas vote to elect Democrats. 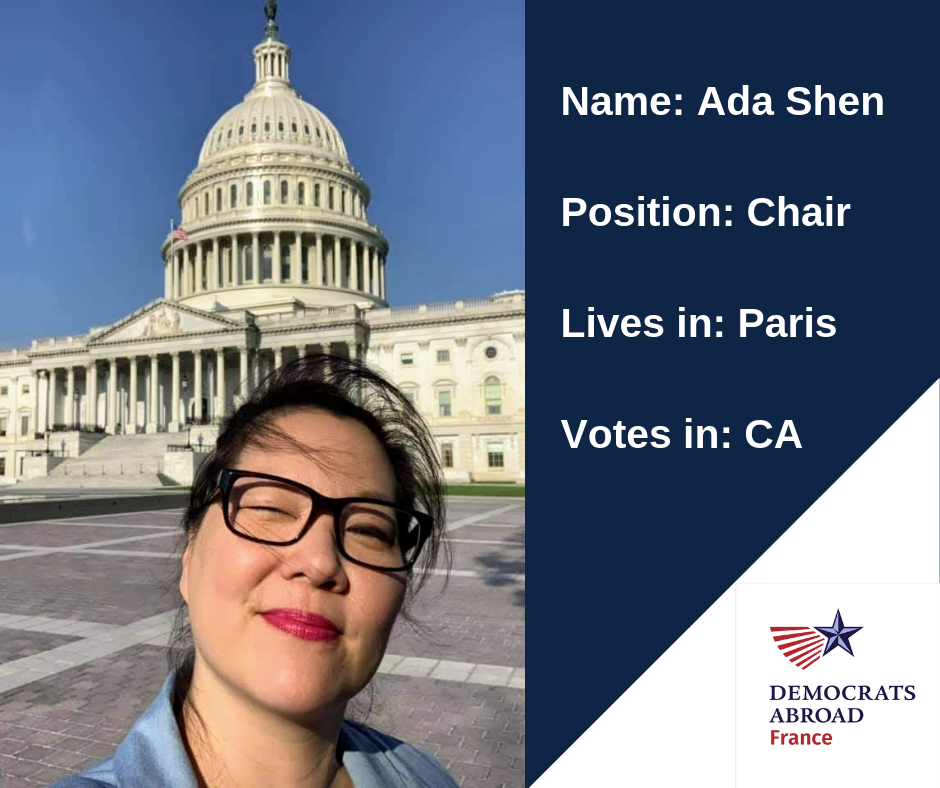 Ada has been contributing to the success of Democrats Abroad (DA) for over 12 years. Originally from California, she initially became involved with DA from Beijing, China in 2007 “as part of a group of folks fired up to take back the White House.” She eventually went on to help found the DA China committee.

“Some of my favorite moments were watching Obama win Ohio in 2008; Obama's surprise win in Florida in 2012,” she explained. “In 2016, a man walked in to our voter registration event announcing that although he was a lifelong Republican and had been a field director for Romney in 2012, he was there to register and vote for Hillary. We became friends, and are still friends to this day."

In 2017, Ada and her husband Emmanuel, a French national, moved to Paris. Prior to being elected Chair in May 2019, Ada served as DAF’s “Get Out The Vote” (GOTV) Officer and Database/IT Officer, where she grew voter engagement and participation dramatically by reaching out to the groundswell of those who rose up in the aftermath of 2016 – within DA France and its Caucuses (Youth, Women’s and Diversity), with fellow activist organisations (PAGE, Indivisibles, Our Revolution), and across DA France Chapters.

Under Shen’s leadership, DA France expanded its phone-banking initiatives, SMS and postcard campaigns; voter registration at protests, rallies and special events; hosted voter outreach on campuses and in the community throughout the fall — and connected it to the social media conversation.

Now, on to some fun facts about Ada:

And, when asked what she would do if she were President of the United States for a day, she responded:

“If I was an imaginary magical unicorn President for a day, I would like Thanos-snap my fingers and undo all the damage Trump has done for the last 2.542 years (928 days, 22 hours, and 43 minutes) since he took office. But I'm not a magical unicorn President, and we are not going to get one, so instead as a Nation, a People, and a Party, we are going to have to roll up our sleeves and get to work, to take our country back and set things right — not only to save our Republic, but to truly make it as great. This is why we are Democrats, and we will do our part to this end as DA France.”