The first day of the Democrats Abroad Global Convention got off to an exciting start !  It began early when the Credentials Committee met to hear a challenge made by the Hillary Clinton campaign about the allocation of global delegates. 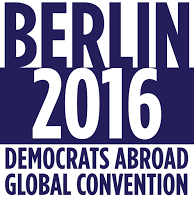 When the news announces the winner of a primary election, people often believe that the story is over.  But that’s far from true—the results of the popular vote are just the beginning!

After a primary vote,  each state party has a state convention where the real action takes place.   And as a state party, Democrats Abroad is seeing a lot of action this weekend in Berlin as it holds its “Global Convention.”

Who are the Voting Participants ?

DPCA Voting Members* -- Country Committee Chairs, Vice Chairs , Voting Representatives, current DNC Members, plus the 8 Members of the DPCA (International) Executive Committee
* DPCA Voting members representing Country Committees must be from a CC in compliance as of the start of the Global Meeting.

The FBAR/FATCA Task Force has closely followed the progress of the FATCA lawsuit (Mark Crawford et al vs US Department of Treasury et al) filed by Sen Rand Paul and others seeking to stop FATCA.  Yesterday, April 26, the case was thrown out of court.  This was, in many respects, expected after the judge denied the plaintiffs' request for a preliminary injunction to stop the enforcement of the Act last September. The plaintiffs then added four plaintiffs, but the judge has found that the plaintiffs still fail to demonstrate standing to sue and the violation of a protected interest.*

The plaintiffs can, of course, appeal the judge's decisions.  We continue to follow this case and will keep you up to date with any further developments.

And we continue the work to promote our recommended reform to FATCA, the Same Country Safe Harbor for Americans Abroad, which would exempt the accounts of Americans abroad in their legal country of residence from FATCA disclosure.

Please contact the FBAR/FATCA Task Force at any time with questions: [email protected]

*This is from the court order terminating the case:  "...the Court finds that none of the Plaintiffs has standing to sue Defendants. No individual Plaintiff has suffered an invasion of a legally protected interest, which is concrete and particularized, and actual or imminent, not conjectural or hypothetical. Moreover, no alleged injury is fairly traceable to the actions of the Defendants, but rather, the actions of an independent third party. Finally, there are no allegations that it is likely that the alleged injury will be redressed by a favorable decision."

Amy Dutailly - Co-Chair of the Youth Caucus in France

Democrats Abroad depends on dedicated volunteers like Amy Dutailly, a seven year resident of Paris, France.  She's helping drive our 2016 outreach as a leader in the International Youth Caucus, and is a co-chair of the Youth Caucus in France. 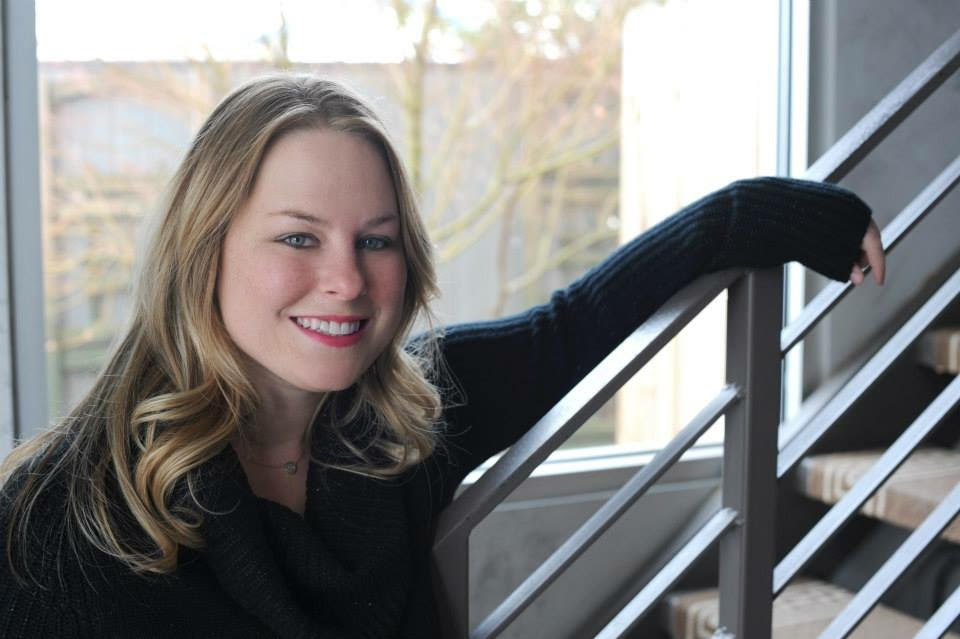 Twenty-one members of Democrats Abroad will represent our "state" party as delegates at the Democratic National Convention in Philadelphia in in July. Democrats Abroad has set ambitious affirmative-action goals to ensure that our delegation represents the diversity of our constituency.

The results are in! In an unprecedented turnout, up 50% from 2008, 34,570 voters cast their ballots from over 170 countries all around the world, through in person voting, by fax, email, and post, and the results are as follows:

Sanders picks up 9 pledged delegates as a result of the primary, while Clinton secures an additional 4 delegates. A full breakdown of the total ballots cast for each candidate, and number of delegates received, is detailed below.

DA volunteers worked around the clock and around the world over the past two weeks to verify and count every ballot cast.

Voting in the Global Presidential Primary finished on March 8th, but the work isn't done for the tens of volunteers
around the globe doing the final vote count.

Democrats Abroad will announce the results of the Global Presidential Primary on Monday, March 21.  While we don't yet know who won, we do know that Americans living outside the U.S. cast more ballots than ever before.

Democrats Abroad volunteers made the record voter turnout possible by running more than 150 in-person voting centers in 38 countries as well as accepting ballots by email, post and fax. 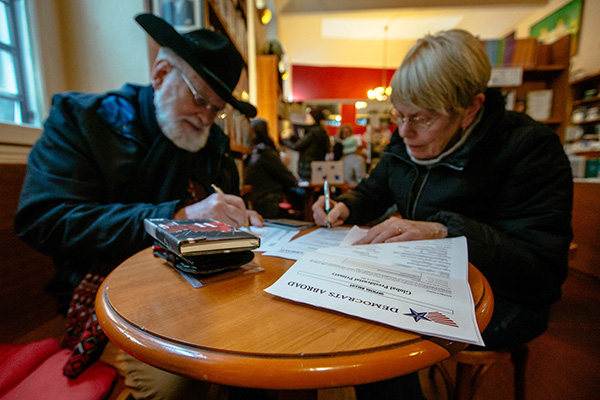 Over 10,000 Americans have cast their ballots | Voting at local sites, and remote voting, continues until March 8
Over 10,000 Americans have already voted in Democrats Abroad’s Global Presidential Primary, with many more ballots to be cast between now and March 8.
Unlike voters in the United States, Americans living abroad have the opportunity to vote in the Democrats Abroad primary until March 8th at local polling stations, or by emailing, posting or faxing their ballot.
The final results of the Global Presidential Primary, including delegate allocations, will not be announced until all ballots are counted on March 21.
The primary, which kicked off at Midnight on Tuesday, March 1 in Wellington, New Zealand, has been the subject of unprecedented interest by the public and the media.
Voting centers report large numbers of Americans joining at their local voting center, showing proof of identity to volunteers, and casting a ballot. From Prague, Julia Bryan, Chair of Democrats Abroad Czech Republic, reports that their membership numbers have doubled in just a few weeks.
"We're seeing a lot of interest all around the country. Voters are telling their friends, who are telling their friends - it's a big chain reaction that's exciting to be a part of."
U.S. Democrats in 111 cities, in 39 countries, will take part in the Global Presidential Primary before it runs its course. A full list of voting sites and times can be found at democratsabroad.org/gpp.
For more details about the Global Primary, including our delegate allocation, local media contacts and a list of our ‘super delegates’ and their candidate commitments, visit democratsabroad.org/press.
Photo by Lukas Biba, all rights reserved, Reportér Magazín
posted by Julia Bryan | 10834.60sc
March 05, 2016
Share