To Filibuster or Not Filibuster. That is the Question. 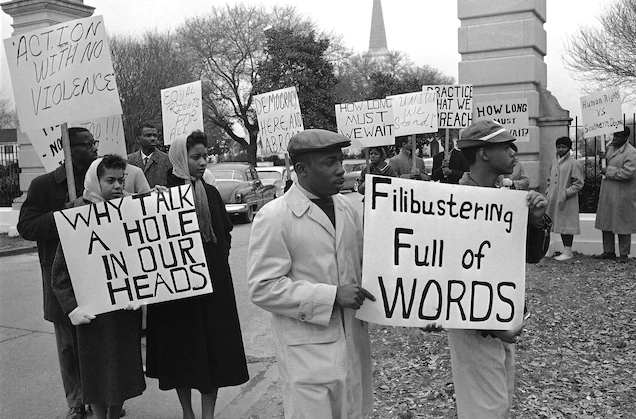 On December 5th, Senator Tina Smith (NM) shared on Twitter that she was in favor of removing the filibuster, in an attempt “to move this country forward.” With previous convictions over using the filibuster to protect voting rights, civil rights, and women’s health, she took an abrupt turn stating, “it’s been a highly effective tool to thwart the will of the people.”

The filibuster, a congressional tool requiring a supermajority of 60 votes in the Senate, was mistakenly created to protect minority representation. For example, the filibuster in its ideal form looks something like this:

Let’s say that our 50/50 tie in the Senate truly reflected a 50/50 split in the wants, desires, and needs of the populous. Without the filibuster, a simple tie-breaking vote made by our democratic V.P. would propel bills into policy that are actually not supported by a true majority of the population -- bills supported by roughly 50% of people. A filibuster requires deliberation, and the need to pull representatives from the side of the minority in support of legislation in order to get passed. In other words, the filibuster’s main role is to protect Senate minorities like the one stated here -- a 50/50 split or something similar.

The minority that currently exists in congress, however (the 50/51 with V.P. Kamala Harris providing the tie-breaker vote), is not an accurate proportion of the populous. Even in 2018, when Democrats were the minority in the Senate, they still represented a larger proportion of Americans. The Republicans have been in possession of a Congressional advantage for some time, and the filibuster only exponentially increases their power. In a moving statement, Senator Warnock (GA) stated, “It’s a contradiction to say we must protect minority rights in the Senate while refusing to protect minority rights in society.” Furthermore, its becoming harder to strip the filibuster from personal ideological beliefs held by representatives that are not indicative of widespread support, as Senator Lindsay Graham (S.C) made visible by stating that he would use the filibuster to block voting rights and LGBTQ+ legislation, threatening to “talk until [I] fell over,” if needed.

Among the bills that have overwhelming support from the public, but most likely won’t see the light of day, or get far with the filibuster, are: The Equal Rights Amendment, The Equality Act, legislation that expands labor rights or tightens gun regulation, reauthorization of the Violence Against Women Act, and Immigration Bills with proposals giving  permanent residency to “Dreamers.” Specifically, and in light of the rampant and transparent voter suppression efforts in the 2020 election, the For the People Act will also most likely bump into filibuster delays, if not full fledged assault, resulting in death on the Senate floor.

Many Democrats have been rallying in recent weeks for the removal of the filibuster, among them, former President Obama who has labeled it “a Jim Crow relic,” and Senator Elizabeth Warren, stating that the filibuster has “deep roots in racism.” President Biden, on the other hand, is in favor of keeping the filibuster, however reforming it, with support from moderate Democrat Joe Manchin (W.V). Reforms include actually imposing the obscene debate time requirement, a mechanism not currently imposed, or changing rules to reduce the number of bills that require a supermajority. Invoking a filibuster could be made harder by allowing some dissent, rather than full consent to bring a vote to the Senate floor; or the Senate could reduce the amount of time necessary to invoke cloture, a procedural tool used to delay ending debate on a measure. A creative solution on filibuster reform proposes that, rather than requiring the 60 votes needed to end cloture, a better way to deal with necessary debate is to require 40 votes to continue it.

“Filibuster reforms are quite normal.” -- Vox

With the debate intensifying as Democrats try and push for action on loads of reform and legislation, it makes sense for citizens to get to know the filibuster, learn about the discussion, and hold our representatives accountable for the grounds and actions they profess and ultimately take.

For a great resource on reasons to eliminate the filibuster, check out Ezra Klein’s commentary in Vox in October, 2020.

For a thoughtful  argument on the pros and cons of the filibuster and reforms, check out this podcast.