The majority of Democrats Abroad (DA) delegates to the Democratic National Convention have joined over 750 others from around the United States in a move to put Medicare for All squarely on the party’s agenda.

Fifteen members of the Dems Abroad Delegation of 23 have signed a pledge to vote NO on the 2020 DNC Platform unless it includes a commitment to a universal, single-payer healthcare plan.  This compassionate initiative has gained support from Biden delegates as well.  These delegates are participating in the Democratic process and exercising their right to vote on convention business. Voting NO on the proposed platform exerts influence for Medicare for All, towards bringing the Democratic Party in line with the majority of Democratic voters.  It is voicing the sentiments of those who elected them.  High-quality, equitable, and freely available healthcare for all Americans is one of the main policy priorities of the Democrats Abroad Progressive Caucus and supported by a majority of DA members, as well as included in our own DA Platform.

John Baumlin, DA Sanders Delegate and DA Japan Chair, helped compile positions of all state party platforms and reports that ". . . the state platform data and our own platform in DA, does not support the current proposed DNC platform."

In solidarity with other state party delegates, the fifteen DA Biden and Sanders delegates have pledged to vote NO on the platform as a bloc on Tuesday, August 11, 2020.

The draft 2020 DNC platform is a product of negotiations between a team of Biden delegates and Sanders delegates.  It progresses beyond past platforms in some areas, like climate and infrastructure policy.  However, it is a major disappointment to the 70~80% of Democratic voters who, polls show, consistently support Medicare for All. The draft platform was approved to be sent to the full convention by the Platform Committee by a vote of 173-0.  Currently, it is being voted on remotely up or down in a single vote by all delegates.

The draft is expected to be approved.  Nonetheless, a number of Sanders delegates led by Nevada Delegation Chair Judith Whitmer, are taking a strong stand for a position clearly supported by the majority of Democratic voters and state party platforms.  Whitmer sent other delegates an email saying, "During a public health crisis in which millions of Americans have lost their health insurance and families have to choose between paying rent or healthcare, the Democratic Party just refused to call for a universal, single-payer “Medicare For All” healthcare system in our National Platform. Even with irrefutable proof that our private insurance system has completely failed us as a nation, our Party leaders have chosen to mold our platform to a candidate’s position.

Instead, our National Platform should reflect the values and principles of the people. The majority of all Americans support Medicare For All and it’s time for the Democratic Party to stand with the people. The DNC has affirmed that healthcare is a human right; therefore, it is the responsibility of our government to protect and uphold that right by untying healthcare from employment and profit margins and by guaranteeing healthcare for all."

DA Sanders Delegate Ty Cofield, of DA Poland, explained, "The 2020 Call for the Convention states: "All delegates to the National Convention pledged to a presidential candidate shall in all good conscience reflect the sentiments of those who elected them." If our delegation and state party electors voted support for Medicare for All as a human right, we're obliged to support them by voting NO on the party platform. The current platform simply isn't the best we can do. We can and should do better." Ty Cofield as M4M-Pledge Deputy Delegate Whip has been working with 2020 DNC NV Delegation Chair Judith Whitmer to whip votes across State Party Delegations.

Lissette Wright, DA Sanders PLEO Delegate and DA Canada+Global Treasurer, reached out to other DA delegates to support the pledge, sharing her view that "Our Democratic Party Platform is our roadmap and it should be bold enough to improve the life of every single American! The lack of commitment to Medicare For All in our Party Platform is appalling and inhumane!"

ProDA Co-Chair Sue Alksnis, who championed Medicare for All within the Dems Abroad platform process, commented, “Voting NO on a platform that ignores Medicare for All shows Dems in Congress and the Senate that we will keep fighting and pushing, phoning and texting, voting and organizing until there is guaranteed, quality single-payer health care for every person in the country.”

Medical Student, DA Sanders Delegate Anya Leonhard, of DA Germany, remarked, "While I'm happy to go on and on about the positives of the German healthcare system versus the United States, the private option creates a two-tiered system of healthcare that disproportionately disadvantages BIPoC, those with chronic illnesses, and those with lower incomes. The base level of care is higher than in the United States, but there is still inherent inequality in the system. The fact of the matter is that, when competing public and private options remain in a system meant to uphold a fundamental human right, the human right in question is monetized and relativized. Why would we need private healthcare if our public option provides sufficient coverage for everyone?"

The DA delegates who have publicly pledged to support Medicare for All by voting no on the platform on August 11 are:

PS: Read ProDA article on how to find and support progressive candidates | Volunteer for the National Nurses United M4A campaign!

PPS: Here is the Delegate Pledge👇

Delegate Pledge Supporting Medicare for All

Whereas, this Country is currently in the throes of a catastrophic public health crisis; and

Whereas, this emergency has led to massive job losses due to the Country’s response to that crisis; and

Whereas, millions of Americans have lost their healthcare insurance because of those job losses at a time when healthcare is needed most; and

Whereas, this crisis has highlighted the need to separate healthcare from employment; and

Whereas, we believe that healthcare is a basic human right, not a luxury; and

Whereas, our current, for-profit health care system is inherently racist and discriminatory; and

Whereas, the majority of Americans now believe that a universal, single-payer, Medicare-For-All system is the best way to achieve equitable, affordable and accessible healthcare for all Americans; and

Whereas, the Democratic Party and their Platform Committee process has failed, to date, to incorporate a clear and progressive platform plank for Medicare-For-All for adoption by the 2020 National Convention; therefore

Be it resolved that we, the undersigned delegates to the Democratic National Convention, pledge to vote against any 2020 Platform that does not include a universal, single-payer, Medicare-For-All platform plank.

N.B. Democrats Abroad is not responsible for any use of your personal data by the third party service that created this petition. You should verify the petition site's privacy rules. 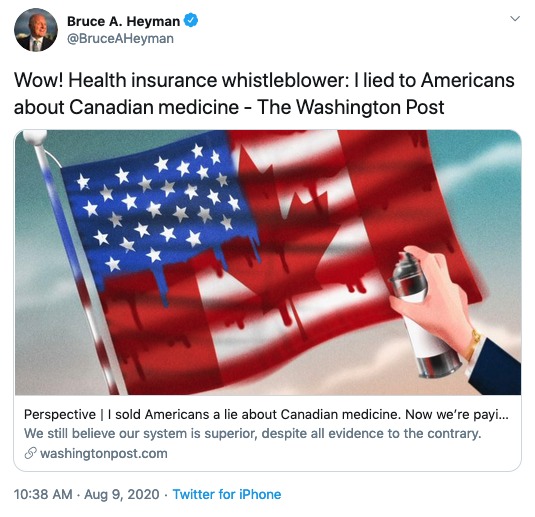 On August 11, 2020, the majority of Democrat Abroad Delegates voted NO on the 2020 Democratic Party Platform as it does not include a universal, single-payer, Medicare-For-All platform plank. 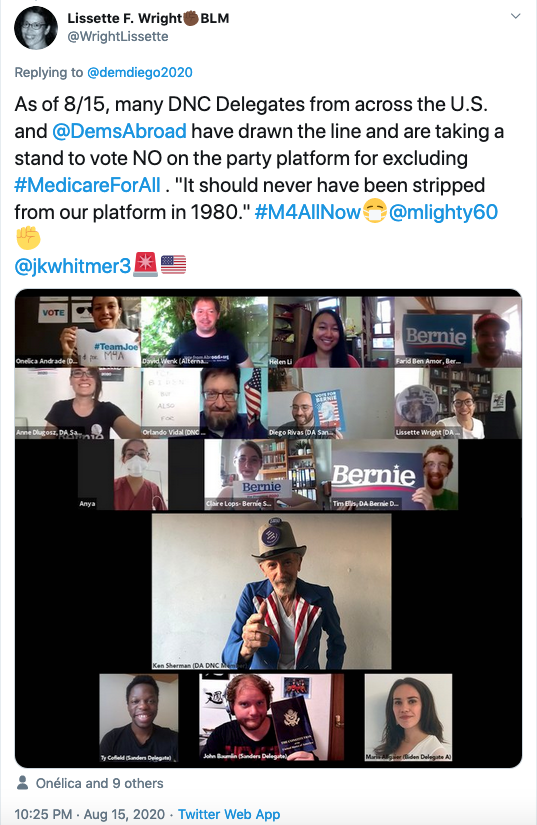