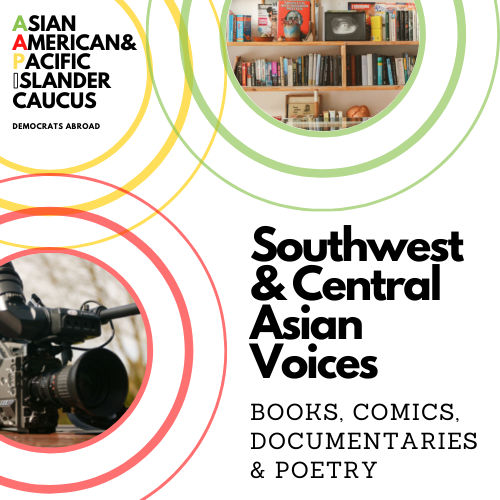 Asia is diverse, and so are our Asian American experiences! Here's a list of recommended reading for people looking to include Central and Southwest Asian American voices on their bookshelves and their screens.

Hayat Shah was captivated by Mina long before he met her: his mother's beautiful, brilliant friend is a family legend. When he learns that Mina is leaving Pakistan to live with the Shahs in America, Hayat is thrilled.

Hayat's father is less enthusiastic. Ever wary of fundamentalism, he doesn't relish the idea of Mina's fervid devotion under his roof.

What no one expects is that when Mina shows Hayat the beauty of the Quran, it will utterly transform him.

Mina's real magic may be that the Shah household becomes a happy one. But when Mina catches the eye of a Jewish doctor and family friend, Hayat's jealousy is inflamed by the community's anti-Semitism - and he acts with catastrophic consequences for those he loves most.

Footnotes in the Order of Disappearance, Fady Joudah (poetry)

In Footnotes in the Order of Disappearance, Fady Joudah has written love poems to the lovely and unlovely, the loved and unloved. Here he celebrates moments of delight and awe with his wife, his mentors, his friends, and the beauty of the natural world.

A Lantern in the Shade, Jacob Nader (novel)

The touching story of an immortal love between a mother and her son. A gripping family heritage tale spanning generations. A Lantern in the Shade is the epic historical fiction novel that draws on a diverse blend of SWANA cultures and poignant, dramatic prose, to tell the story of one immigrant family's quest for truth and honor.

Kamala Khan is an ordinary girl from Jersey City - until she is suddenly empowered with extraordinary gifts. But who truly is the all-new Ms. Marvel? Teenager? Muslim? Inhuman? Find out as she takes the Marvel Universe by storm!

You Exist Too Much, Zaina Arafat (novel)

On a hot day in Bethlehem, a 12–year–old Palestinian–American girl is yelled at by a group of men outside the Church of the Nativity. She has exposed her legs in a biblical city, an act they deem forbidden, and their judgement will echo on through her adolescence. When our narrator finally admits to her mother that she is queer, her mother’s response only intensifies a sense of shame: “You exist too much,” she tells her daughter.

Usama Alshaibi, an Iraqi-American filmmaker, confronts the issues on identity and perception toward Arab-Americans in today's society. Alshaibi conveys to the audience that Arab-Americans should not be put into one, big, identical group; rather the culture consists of a diverse group of identities and voices.

A Thousand and One Journeys: The Arab-Americans, dir. Abe Kasbo

The untold story of almost 200 years of the contributions of those who immigrated to the United States from the Middle East, North Africa and the Gulf have made to the American fabric. With historical immigration patterns as background, the film explores the personal stories of Arab-Americans and how they have contributed to the collective American experience. At a time when the media tends to paint Arab peoples and culture with the broad brush of terrorism, it is increasingly important to present a positive image of the many people of Middle Eastern, North Africa and the Arabian Peninsula who have made America their home, and highlight their American journey as an important part of the larger American Experience.