Amid sighs of relief that we held on to the Senate — with fingers crossed for a win on December 6 in the Georgia runoff — and held the Republicans to a slender majority in the House of Representatives, this is no time for us Democrats to take a half-time break. Presidential elections, with all of the House and a third of the Senate again up for control, are less than two years away. The Inside-the-Beltway echo chamber and pollsters of all persuasions took another bloody nose when the predicted "Red Tide" turned into a modest trickle, but this is no cause for complacency. We need to keep a laser focus on the issues, and on persuading overseas Americans who will be at least 18 years of age on or before November 5, 2024 to register and vote blue. 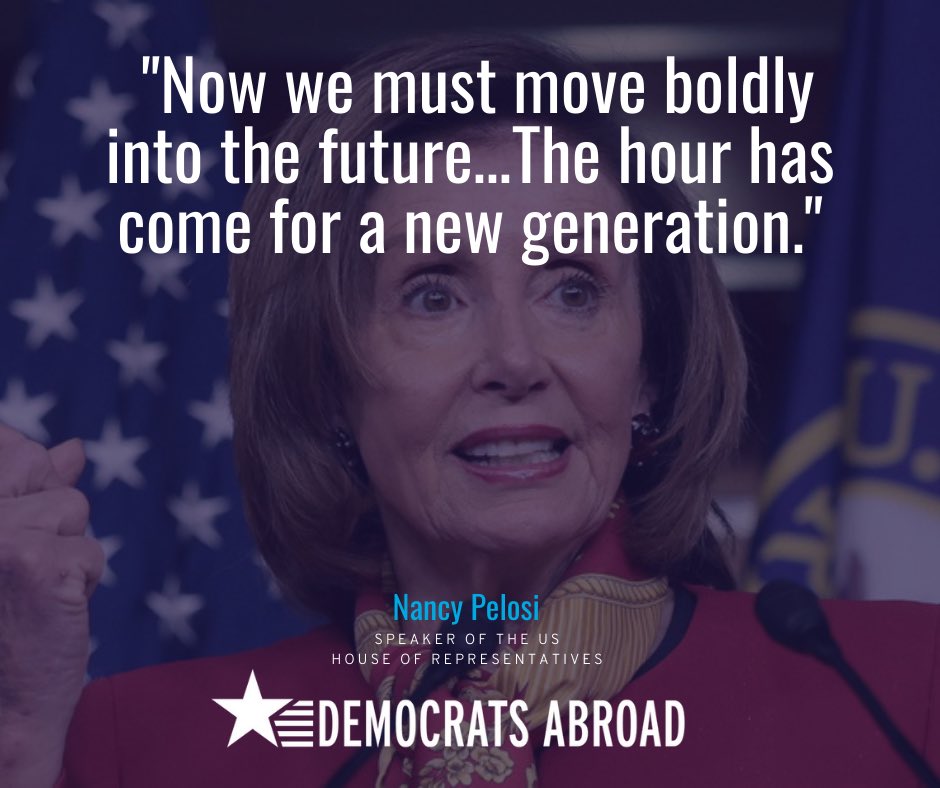 It's time for a loud shout-out to Nancy Pelosi, who will retire as Speaker of the House and leader of the Democratic caucus on Jan. 3, the opening date of the next Congress, while continuing in the House to represent her San Francisco constituents. The first woman to serve as speaker, she may be succeeded by Rep. Hakeem Jeffries, who would be the first African American in that post. Ms. Pelosi is 82, and can reasonably claim to have more than 70 years of hands-on political experience, as she grew up the daughter of Thomas D'Alesandro, five-term Congressman and three-term mayor of Baltimore. A pragmatist to the core, she understood that politics is not high school Civics 101, but rather a version of war without the bloodshed. Unlike the Olympic Games, there are no silver medals. "Winning isn't everything -- it's the only thing." Only by winning office can politicians enact laws in the public interest. Speaker Pelosi was a champion distributor of carrots and wielder of sticks among her members. This has led to grumbling, especially from progressive members, but she was a critical mover in expanding US health care in 2010, then on last year's infrastructure bill and this year's Inflation Reduction Act, which reduces health care costs and addresses climate change.

President Biden has said he will take counsel with his family and other long-time close advisors and make an announcement in early 2023 on whether to run for another term. If he chooses not to, we should remember the line from humorist Will Rogers about a century ago: "I belong to no organized party. I'm a Democrat." The biggest risk for our nation would be a toxic combination of an all-out, no-holds-barred Democratic primary season, ripping the lid off differences between progressives and centrists, while Republicans might show renewed pragmatism; they might dump Trump and nominate someone smarter and more palatable to a majority of voters — little challenge there — and candy coat a version of their good ol’ time reactionary policies. We cannot rely on self-destruction by the other party and The Former Guy, and we will be defending 22 incumbent Senate seats, some of them in normally Republican states.

What to do over the next two years? For a start, the party needs to look at what actually worked in this election, district by district and state by state. From our positions overseas, we need to assess what worked (and what didn’t) to increase the impact of Democrats Abroad. New global initiatives like the state teams, more robust investment in digital advertising, and team-building events like last summer’s visit from DNC leaders helped to drive engagement, but we still haven’t managed to break the barrier of 10% participation by voters abroad. In order to do that, we need even larger, more well-funded teams of committed volunteers.

We also need to update our concept of the Democratic “base.” No longer is it blue-collar workers, many of whom have left the party, seduced by GOP anger mongering, and will never come back. The Democratic party continues to be a big tent, but the center is moving in the direction of minorities (whatever that means anymore), women, Millennials and Gen Z. Labor issues continue to be important, but so are climate justice, bodily autonomy, equality and so much more.

Another area in urgent need of repair is our party's misunderstanding of Latino and Asian voters. Each of these broad categories includes wide variations of ethnicity, cultural habits and differences among generations. Careful opinion surveys have established that many of them do not regard themselves as "people of color," an academic concept that should be permanently assigned to the scrapheap of unhelpful campaign themes.

One final thought: The wheels of justice — at least the US Department of Justice — may grind slowly, but nevertheless they grind on. If the House hearings on the seditious Jan. 6 assault on the Capitol and the discovery of classified documents illegally stored at Mar-A-Lago proved anything, it was that Donald Trump must never again be allowed within reach of the thermonuclear missile launch codes. No person is above the law, and Trump must be indicted and prevented from ever returning to the Oval Office. A lot of pragmatic Republicans know this and are declining to book staterooms on the next Titanic. (Maggie Haberman's new biography, "Confidence Man," describes clearly and in depressing detail the career of this world-class fraud. A must-read, however painful.)

Conclusion: Fellow Democrats, we have a lot of work to do over the next 23 months, so let’s keep the pedal to the metal.