THANK YOU TO EVERYONE WHO PARTICIPATED IN THE GLOBAL PRESIDENTIAL PRIMARY!

NEXT STEP: ARE YOU REGISTERED TO VOTE IN NOVEMBER? 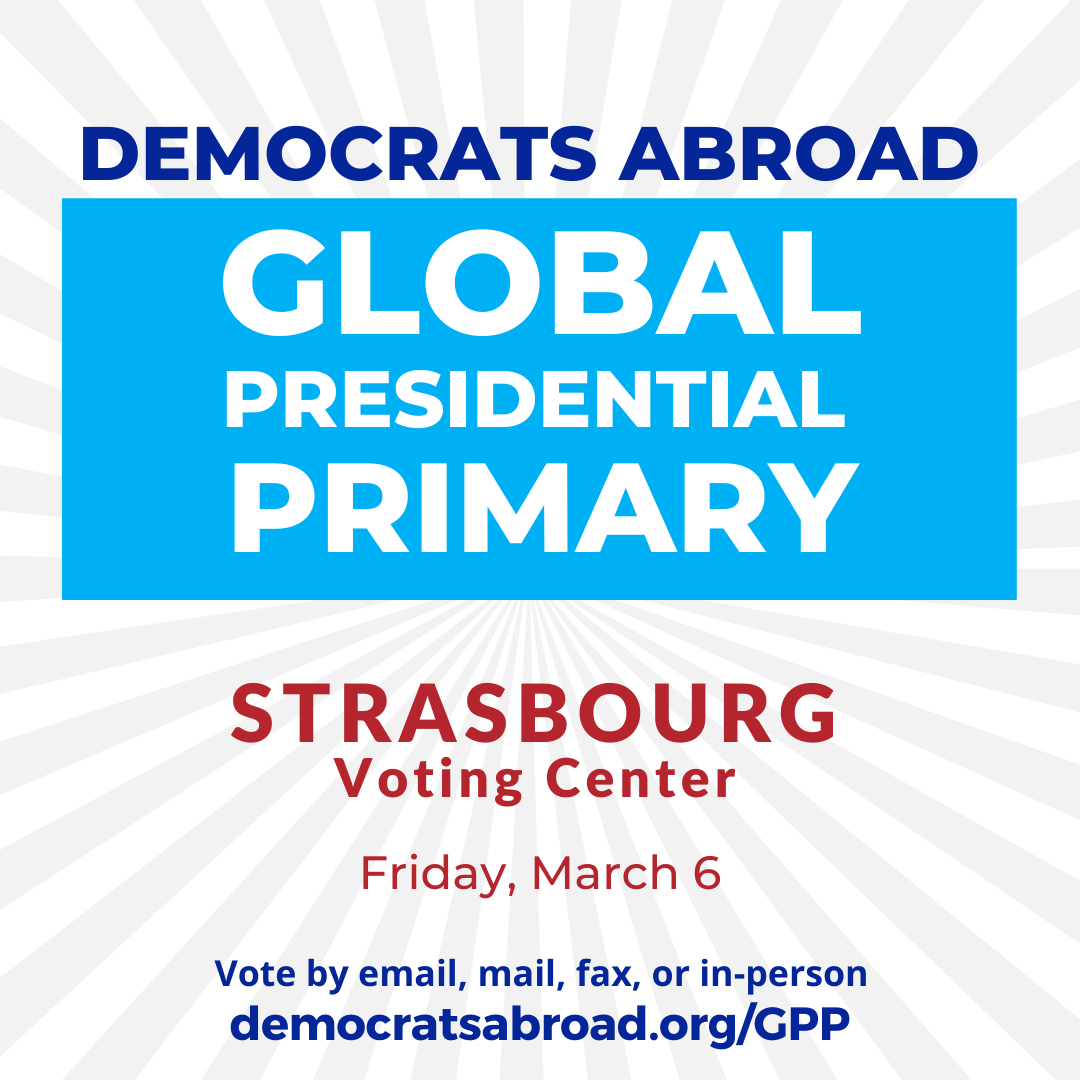 The Global Presidential Primary is a week-long voting period — kicking off on March 3, Super Tuesday — for Democrats Abroad members to participate in our official party-run presidential primary. We’re holding more than 220 events in 45 countries around the world, and we hope you’ll be joining us.

If you’re a Democrat Abroad member and you haven’t voted (or plan to vote) in any other 2020 state presidential primary/caucus, you’re eligible to vote in the Global Presidential Primary.

What if I can't join a voting event in person?

If you can’t join us at the voting center in Strasbourg, you can vote remotely. Look for your primary ballot in your inbox on February 18, or, starting on that date, download it from democratsabroad.org.

Do votes in the GPP count? Why should I participate in the GPP instead of voting in my state’s presidential primary?

Yes your vote counts! In fact, you could even say that votes in the GPP count even more. Tens of thousands of people will participate in the global primary, but millions will vote in your home state. That means that your vote in the Global Presidential Primary is more powerful than voting in the California primary. In fact, it’s four times more powerful.

I vote in California. Can I vote in the Global Presidential Primary and the California primary?

You can only vote in a presidential primary once. If you vote in the global primary and want to vote in California for the down-ballot primary races (like for your congressperson), you can! Just skip the presidential section on your California ballot.

Where can I ask further questions?

Help us spread the word! Consider liking and sharing our Facebook posts about the GPP!

On July 12,  DA Strasbourg joined the world-wide "Lights for Liberty/Close the Camps Vigil". In the background, the locked gates of the European Court of Human Rights, a symbolic reminder of the barriers at the Mexican-U.S. border that prevent migrants and refugees fleeing poverty and persecution from exercising their fundamental rights to dignity and safety; as darkness falls on children taken from their parents and packed in cages.

The ceremonies were, as usual, very moving and a great tribute to Franco-American friendship and cooperation.

The time has come to renew the Board of the Strasbourg Chapter of Democrats Abroad France! 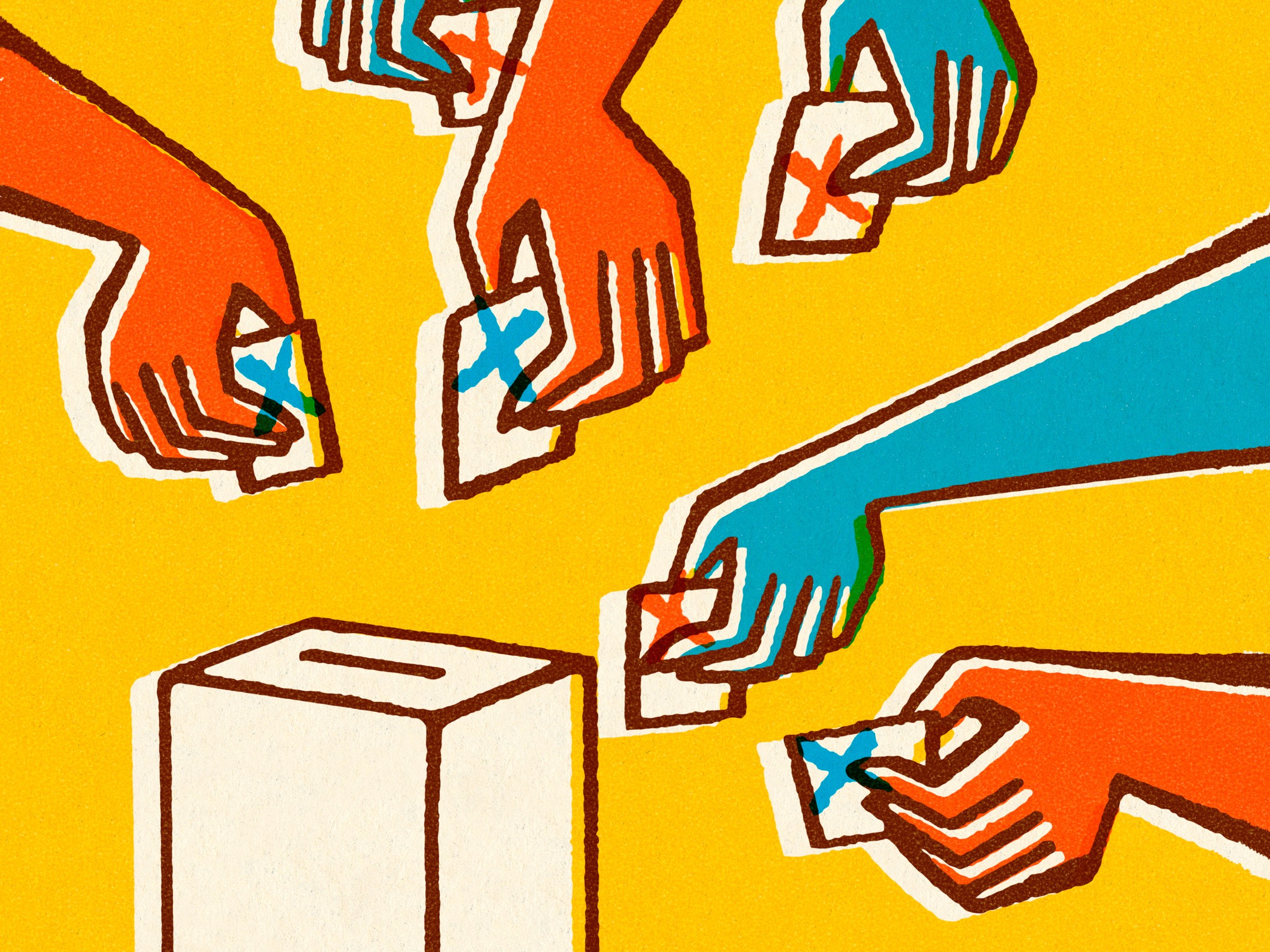 The election will be held at the Strasbourg Chapter Election/Annual General Meeting on Saturday, March 23, 2019 from 4:00 to 5:00 at The Dubliners Irish Pub, 7 rue du vieux marché aux poissions, Strasbourg. Attendees will have the opportunity to meet the candidates and to hear from each of them before voting. For those unable to attend, voting will also be possible electronically or by email (see below).

The chapter board will be comprised of the following members:

✔️ YOU WILL RECEIVE YOUR EARLY VOTE/ABSENTEE BALLOT VIA EMAIL. If you do not receive the ballot from DA Strasbourg via email, it is because you have chosen to opt OUT of receiving our emails. To opt IN to receiving emails from Democrats Abroad, sign in and go to your member account at www.democratsabroad.org.

✔️ TO RECEIVE A BALLOT BY EMAIL (EXCEPTIONALLY), please send a ballot request to daf-strasbourg@democratsabroad.org, specifying how you would like your ballot to be delivered and providing the email address where you would like to receive your ballot.

✔️ YOU MAY ALSO VOTE IN-PERSON AT THE DA STRASBOURG CHAPTER ELECTION ON MARCH 23rd.

✔️ Note: you MUST be a member of the Democrats Abroad France - Strasbourg chapter to receive a ballot and to vote in the chapter elections. If you are not yet a member, you can join at www.democratsabroad.org/join. In order to vote in-person at the election meeting, please join by the end of day March 22nd. If you are a DA France member who has recently moved to the Strasbourg area, please ensure that your address is up-to-date in your membership account by going to www.democratsabroad.org under ACCOUNT SETTINGS.

Democrats Abroad Strasbourg is the third oldest chapter of DA France, the official country committee for US Democrats living in France.  At the heart of Europe, and home to several European institutions, including the European Parliament and Court of Human Rights, Strasbourg is an ideal setting for international political observers and activists. This helps inspire our chapter to organize a variety of activities ranging from lectures, film screenings and guest speakers, to participation in political rallies and marches on topics of concern to Americans abroad.

Recent events include our locally-organized March For Our Lives, Science March, events marking Earth Day, Gay Pride, Martin Luther King’s “I have a dream” speech and a Families Belong Together rally. Members have also participated in annual World War military commemorations as well as Women’s Marches organized by the DA chapters in Paris and - thanks to Strasbourg’s unique geographical position on the German border - nearby Heidelberg, Germany.

Our regular monthly meetings, in a variety of social settings, provide an opportunity for members to come together, meet fellow Dems, talk about the current political scene, as well as propose and discuss future projects. Much of our activity is focused on supporting and promoting voter registration for Americans in the East of France, including students participating in the city's numerous Study Abroad programs.

The Strasbourg chapter encourages current efforts to develop a sub-chapter ("precinct") in the neighboring Haut-Rhin region of Eastern France, for those members who reside closer to the Swiss border.

With events planned throughout the year, we encourage anyone interested in participating to get in touch.

We look forward to hearing from you!