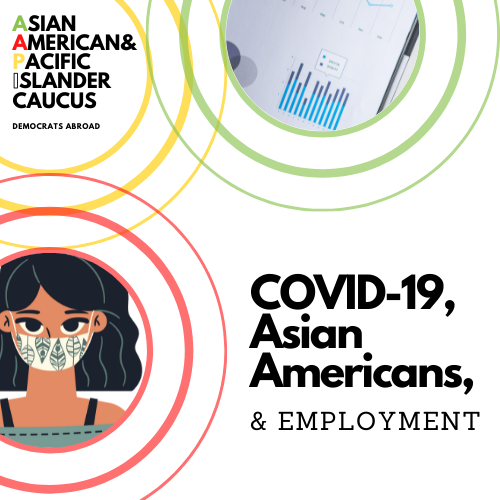 The reasons for the discrepancies are largely geographic and economic, according to Pickert. “Many work in industries particularly vulnerable to business closures, and almost one-third of Asian Americans live in California, one of the states hit hardest by pandemic restrictions,”she wrote.

Katherine Kam of NBC News suggested that work in the service industry doesn’t fully explain the trend, and cites a UCLA report that “anti-Asian racism may be an exacerbating factor.“

“Anecdotal evidence demonstrates that Asian American businesses, particularly those in ethnic enclaves, have experienced the labor-market impact of COVID-19 earlier and more deeply because of racialized blaming,“ quotes Kam from the report.

However, according to Hu and Honoré, this assertion is not supported by their analysis, combining Current Population Survey (CPS) data with state specific measures of biases against Asians in order to evaluate the effect of Anti-Asian sentiment. Specifically, they found no evidence that “Asian-Americans in states that had stronger anti-Asian bias in 2018 saw an especially large decline in employment during the pandemic.”

Hu and Honoré did find that, in a pattern differing from the 2008 economic crisis, “Asian Americans with no college education have been especially hit hard by the pandemic. … There is some evidence that the low educated Asian American men in occupations with more interpersonal tasks were particularly adversely impacted.“

However, they also noted that “Asian Americans are also harder hit unconditional on education. This suggests that one cannot explain the main results by only pointing to different selection into education levels across ethnic groups.“

As Marlene Kim, an economist for the University of Massachusetts noted for NPR, "Asian Americans are absolutely overlooked. People have the sense that Asians are fine. That they're a model minority. That they have good jobs and are doing OK." There is a distinct lack of attention and research towards the economic effect of the pandemic on the AAPI community.

Even this data on Asian-Americans reveals a related gap in our analysis: even this limited data is greater than what we see for the Pacific Islander demographic, which sees even less attention.

The disparate and unique effect the pandemic is having on Asian-Americans is proof that more research is needed into this community. Those interested should reach and support publications and institutions doing the important investigative work into these communities.