The January 19 Toronto Women’s March brought together hundreds of women and their supporters for a brisk walk on a stormy day to proclaim that “We Will Not Go Back!” The central goals for the Democrats Abroad contingent in the march were approval of the Equal Rights Amendment to the U.S. Constitution and an end to violence against women. The march was the third organized since the inauguration of Donald Trump as President in January 2017. “That moment was a wake-up call for women. It showed how far we still need to go to achieve equality,” said Danielle Stampley, Vice-chair of the Toronto chapter of Democrats Abroad.

The Democrats Abroad (DA) contingent in the march from City Hall to Queen’s Park included about a dozen DA members based in Toronto and also in London, Ontario. DA Canada Secretary Marnelle Dragila and Gena Brumitt, the Chair of DA’s London and area chapter, made the trip from London despite the severe conditions. Ms. Dragila, who wore a Handmaid’s Tale costume for the occasion, said that “I’ve attended the Toronto Women’s March every year since that incredibly inspiring first march in 2017. Since Trump was elected and due to his subsequent additions to the Supreme Court, it has felt to me that women’s rights have never been more at risk during my life time (I was born the same year that Roe v Wade was decided). As a result, I decided to wear a Handmaid’s Tale costume to the march this year. It seemed like an appropriate choice given what’s so clearly at stake now.”

The crowd included representatives of trade unions, church-based groups, and political parties as well as members of women’s organizations. The proceedings at City Hall were launched by a group of drummers, who were followed by a number of speakers, including Toronto Councillor Kristyn Wong-Tam. Ms. Wong-Tam told the crowd that women need to make sure that their voices are heard on issues such as gender equality, poverty, and violence against women.

The Women’s March this year was an international event that featured marches in many U.S. cities, Canadian cities, and London, UK. “It is upsetting to women everywhere that someone who has animosity toward women holds power,” said Ms. Stampley. Karin Lippert, the Co-chair of DA Toronto’s Women’s Caucus, summed up the day’s events this way: “It was cold, but we were loud. We cheered for all the speakers and marched for women’s equality again in Toronto. Our DA Women’s Caucus members wore their ERA signs proudly not only in Toronto but also around the globe. We have an opportunity to ratify the amendment written by Alice Paul in 1923 this year. Like countless numbers of women, I have marched for the ERA for decades. We need ERA to move forward on a myriad of women’s rights. I believe that we are almost there.” 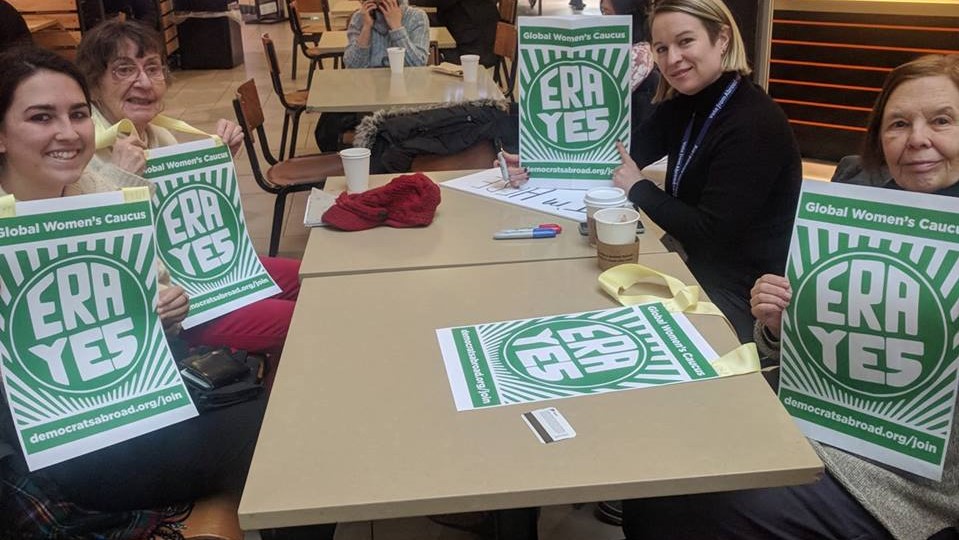 Many members of Democrats Abroad assert that this is the era when the Equal Rights Amendment has to be reintroduced and finally approved for inclusion in the U.S. Constitution. The amendment, if approved, would guarantee equality under the law for men and women, and, in so doing, provide a powerful tool that women can use in legal and other contexts to secure their just claims.

Many people find it hard to believe that the U.S. Constitution does not already protect women’s rights, but it does not. A constitutional amendment was already needed to extend the right to vote to women, and that did not happen until 1920 in the 19 th amendment. “I thought that this had been covered,” said Toronto chapter Chairperson Julie Buchanan. “I know that society does not treat us as equals, but I thought that my government had my back.”

The Equal Rights Amendment was first introduced into Congress in the early 1920s and then reintroduced in 1971, when it was approved by both houses of Congress. It was then ratified by 35 of the 38 state legislatures that needed to approve it by a deadline. The amendment seemed to be headed for adoption, but movement toward that goal was stopped through the organization of a conservative campaign that argued that women need special protection under the law. One of the campaign’s claims was that adoption of the ERA could lead to measures such as the drafting of women for the military.

Since then, the ERA has remained an unachieved goal.

Now there is new momentum to approve the ERA and new evidence that women still need its protection. “The Equal Rights Amendment makes possible and makes constitutional laws we don’t have now,” according to Catherine A. MacKinnon, a law professor at the University of Michigan and a pioneer in the field of sexual harassment and sex discrimination law.

In 2000, the Supreme Court struck down the federal civil remedy portion of the Violence Against Women Act, holding that Congress lacked the power to create it under the 14th amendment. If the ERA had been adopted, that law would have had much stronger constitutional footing, according to MacKinnon.