“Stay on Target” is a great mantra for all of us for the Nov 2022 elections. As a reminder, our democracy hinges on three key outcomes:

I’m optimistic we can do this – but only if we all put our shoulders to the wheel. The media, however, generally projects less than a snowball’s chance in hell of achieving these goals. But remember – bad news sells better than good news – so the media outlets will, on measure, feature “sky is falling” and “things really suck” news.

That’s why I was so surprised and delighted recently when The Daily (NYTimes Podcast) interviewed Nate Cohn whose polls and analysis affirmed my (and others’) assertions that we have a better chance in Nov than has previously been predicted. Totally worth a listen!

HOWEVER – polls don’t vote, people do. Thus, there are a few key factors that rely on your and others’ help and amplification:

I’m going to double-click on this last point for a moment. Again – I’ll invoke Dan Pfeiffer, and feature a different post from him that opened my eyes to this ploy about POTUS’ age to distract Democrats. Unfortunately, Dems tend to have the attention span of a fruit fly and are EASY to distract.

Over the past few weeks, there have been many articles highlighting that Biden will be too old, he shouldn’t run, he’s not handing off the mantle, etc… It's super easy to get sucked into this debate.

BUT WHO GIVES A D…?! The more that voters think about Joe’s age and 2024 when they are deciding whether or how to vote in 2022 – the more they will be voting for/against whether Joe Biden should be our nation's first octogenarian President and not FOR key and great Dem candidates up and down the ballot. OR WORSE – they just won’t vote because they’re fed up (especially young voters wanting a generational change). Please keep in your mind and heart that if we can expand the Senate by 2, hold the House and win key state and local races, we save our democracy AND we ensure the effectiveness of the second half of THIS term.

If someone tries to engage you in the debate of “do you think Joe should run” I recommend an answer of “I appreciate the temptation to speculate and discuss, but I’m not focused on that right now – we have to make sure we win in 2022 and can’t be distracted by 2024. Want to knock doors/volunteer with me?”

To summarize all of that, the Republican Playbook is:

And the Democrats Playbook is and/or needs to be:

And here are just a couple of big actions you can take to help achieve our goals:

Race To The Ballot Box

The Americans with Disabilities Act #ADA was passed on July 26, 1990, to prohibit #Discrimination against people with #Disabilities . Following this legislation, Boston held the first #DisabilityPrideDay event in July 1990 and Disability Pride Month was born.

While disability pride and parades are a relatively new concept, the idea of Disability Pride is rooted in the same foundation as movements like #LGBTIQ+ and #BlackPride .

❖ Health:  There is evidence that African Americans with disabilities who need medical treatment face barriers that range from negative stereotypes on the part of practitioners to a lack of transportation to get to a doctor’s office.

❖ Black history: Students introduced to African American notables such as #HarrietTubman , #FannieLouHamer and #MaryDavidson learn about their contributions to society but rarely do they find out that each had a disability.

“Many black historical figures, innovators and activists have had their disabilities erased when their stories are taught in schools and covered during Black history and women’s history observances,”

The same could be said for the stories being written today about #RacialInequality which omit the struggles of Black men and women with disabilities. 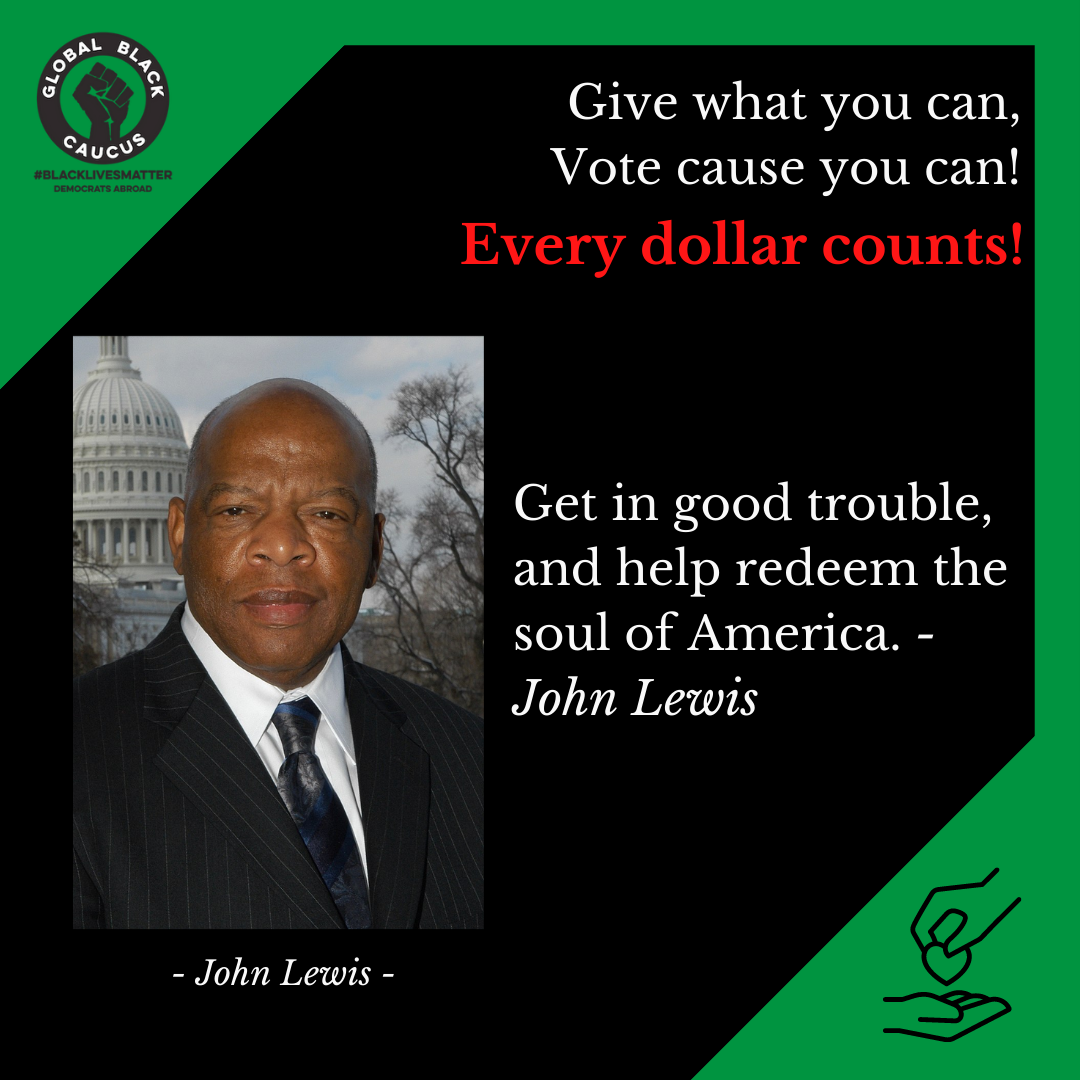 ❖ Please help us reach voters, especially BIPOC voters, and provide them with the resources they need to vote from abroad!

❖ Please help Democrats Abroad Global Black Caucus fight for our democracy in 2022 and beyond!

❖ Donations of any size will help us "Get Out the Vote" and support the Biden/Harris Administration in the midterm elections.

❖ We MADE the difference in 2020! And in Georgia in 2021! And we will continue to fight for Democratic victories and for issues that our members care about! 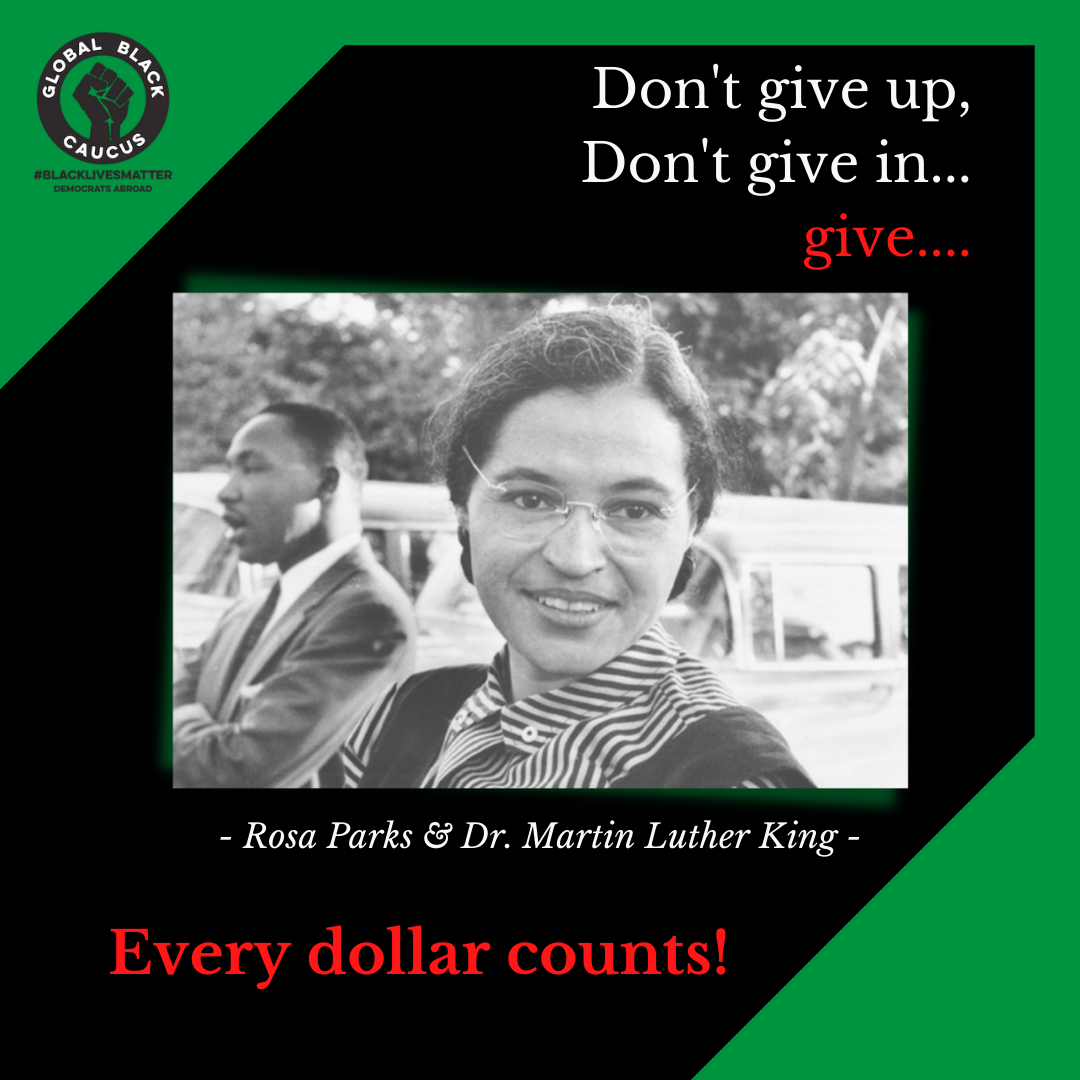 ☞ WE CAN’T WIN WITHOUT YOU!

If you can, please chip in!

Either by donating to the Global Black Caucus:

or support us to help us modernize our website and reach more voters:

Your generous donation is a strategic investment that will benefit Democrats—and our democracy—for years to come!

Thank you for your support! 💙 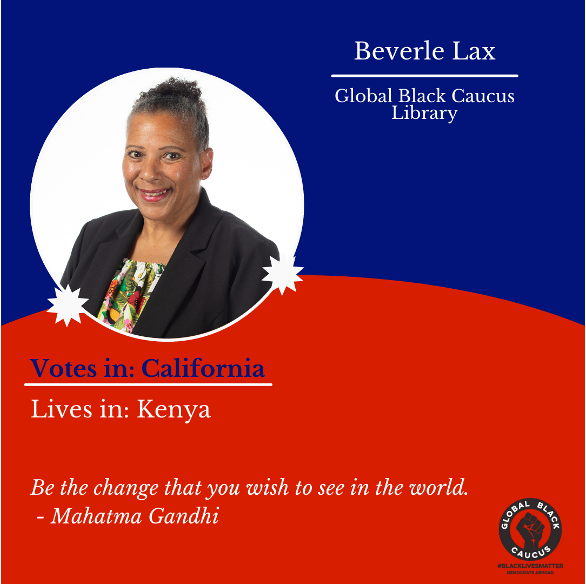 I serve as Counsel for DA Kenya, and this year, 2022, we are celebrating our first year anniversary as a country committee. Besides having helped draft the Bylaws, as once a member of the Nominations and Elections Committee, and ensuring the Bylaws are followed by the country committee, I have contributed to editing our newsletters. This year I had the honor to serve on the Resolutions Committee and the Charter Committee for DA.

Be the change that you wish to see in the world. - Mahatma Gandhi

Read more about Beverle here: ABOUT US 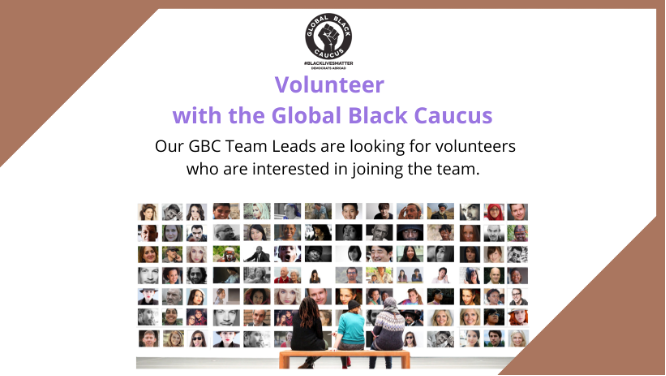 There are many ways for you to get involved. You can become an active VOLUNTEER, DONATE or join our EVENTS and last but not least having a strong digital presence will be more important than ever for finding and mobilizing voters abroad for critical races in 2022.

We Need You.
Our Brothers and Sisters Need You. Our Country NEEDS You. BE THE FUTURE!

Did you miss out on this great interview with Ambassador Suzi G. LeVine on: How to Defend and Expand the Senate? Hold the House?

It is almost unimaginable that a strong ray of hope can shine through in such dark times. After over 100 years and counting, reparations were made to the Bruce family by returning the prime Southern California beachfront to its rightful owners.

In the 1900s, blacks were excluded from most local beaches; thus, Charles & Willa Bruce decided to create a 3-acre beach resort for black residents in what is now known as Manhattan Beach. It became highly successful, thus rearing the ugly head of envy and jealousy from the white residents. Then according to that hateful playbook of racism, there were threats, the KKK, burning of property, and intimidation of beachgoers. It didn’t work. So, what could not be accomplished illegally was accomplished legally by executing eminent domain, which allows the seizure of property without the owners’ permission if the government states it is needed for public use.

Paying an obligatory pittance, the property was confiscated, in 1924, under the guise of building a park for public use; the land, however, remained vacant for several decades. Thirty-six years later, fearing that sleeping dogs might awaken, the city decided to build a park named Bayview Terrace Park. However, it was the first and only black elected official (Manhattan Beach Mayor Mitch Ward 2007) that insisted on the park being renamed Bruce Beach

Born out of a 2020 #Juneteenth commemoration picnic held in the park, the advocacy coalition Justice for Bruce’s Beach was founded and spearheaded by Kavon War, an African American resident of Manhattan Beach. This grassroots movement pressured the city council into creating Bruce’s Beach Task Force.

Los Angeles County Supervisors Janice Hahn and Holly Mitchell took up the reigns with the new law being authored by Senator Steve Bradford, who sits on the state’s newly formed reparations task force.

“This is what reparations look like,” said Bradford, insisting that the county is not giving anything to the Bruce family yet simply returning their stolen property.

There are still 99 problems, but the beach “ain’t one for the Bruce family.”

I mailed my VFA request via Canada Post to the Detroit City Clerk on May 19th for the August 2nd Primaries. When I did not hear back I sent the application again by fax on June 29th, no response.

I was finally able to speak to the Deputy Director who informed me by that my ballot was mailed on June 16th, and I would need to send a signed letter requesting that the initial request be destroyed and that an email ballot would be sent.

I did so on July 16th, received the email ballot Sunday, July 17th, completed it as directed, and sent July 18th through Canada Post Office via FedEx Priority Post for nearly $60.

Today I received an email from BallotTrax that my ballot had been received and would be counted in the August 2nd Primary elections.

This begs several questions about voter suppression. Why did I not receive a response to my fax? Why no answer in response to my call to the City Clerk's office? Why did my concern need to go through a number of transfers before getting direct contact with the Office of Elections? Is this what I can expect for the November elections? I never had these challenges until Trump was elected. Makes one wonder indeed.

I urge you all. Stay persistent, stay focused. Don’t get discouraged however old you are.

Together we can save our democracy! Apart we live - United we vote!