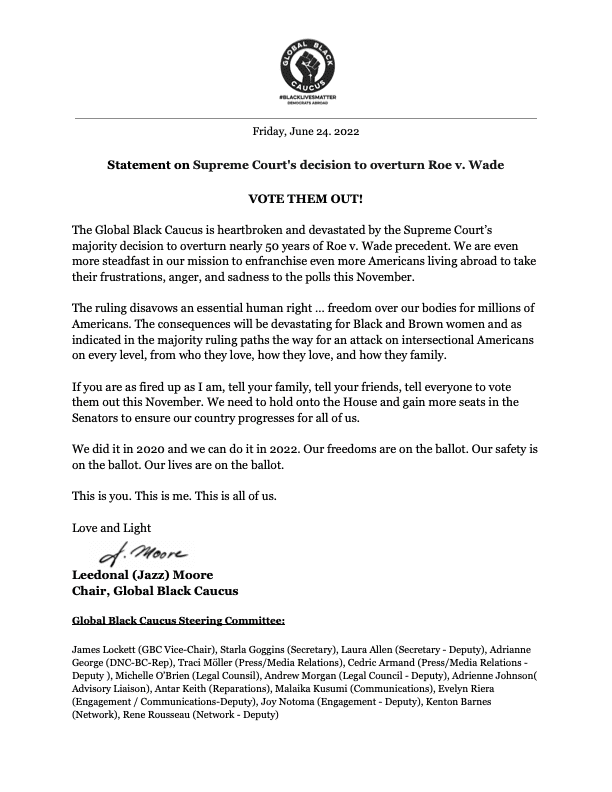 The Global Black Caucus is heartbroken and devastated by the Supreme Court’s majority decision to overturn nearly 50 years of Roe v. Wade precedent. We are even more steadfast in our mission to enfranchise even more Americans living abroad to take their frustrations, anger, and sadness to the polls this November.

The ruling disavows an essential human right … freedom over our bodies for millions of Americans. The consequences will be devastating for Black and Brown women and as indicated in the majority ruling paths the way for an attack on intersectional Americans on every level, from who they love, how they love, and how they family.

If you are as fired up as I am, tell your family, tell your friends, tell everyone to vote them out this November. We need to hold onto the House and gain more seats in the Senators to ensure our country progresses for all of us.

🏃🏿‍♀️Race To Saving Our Democracy 🏃🏿‍♂️ 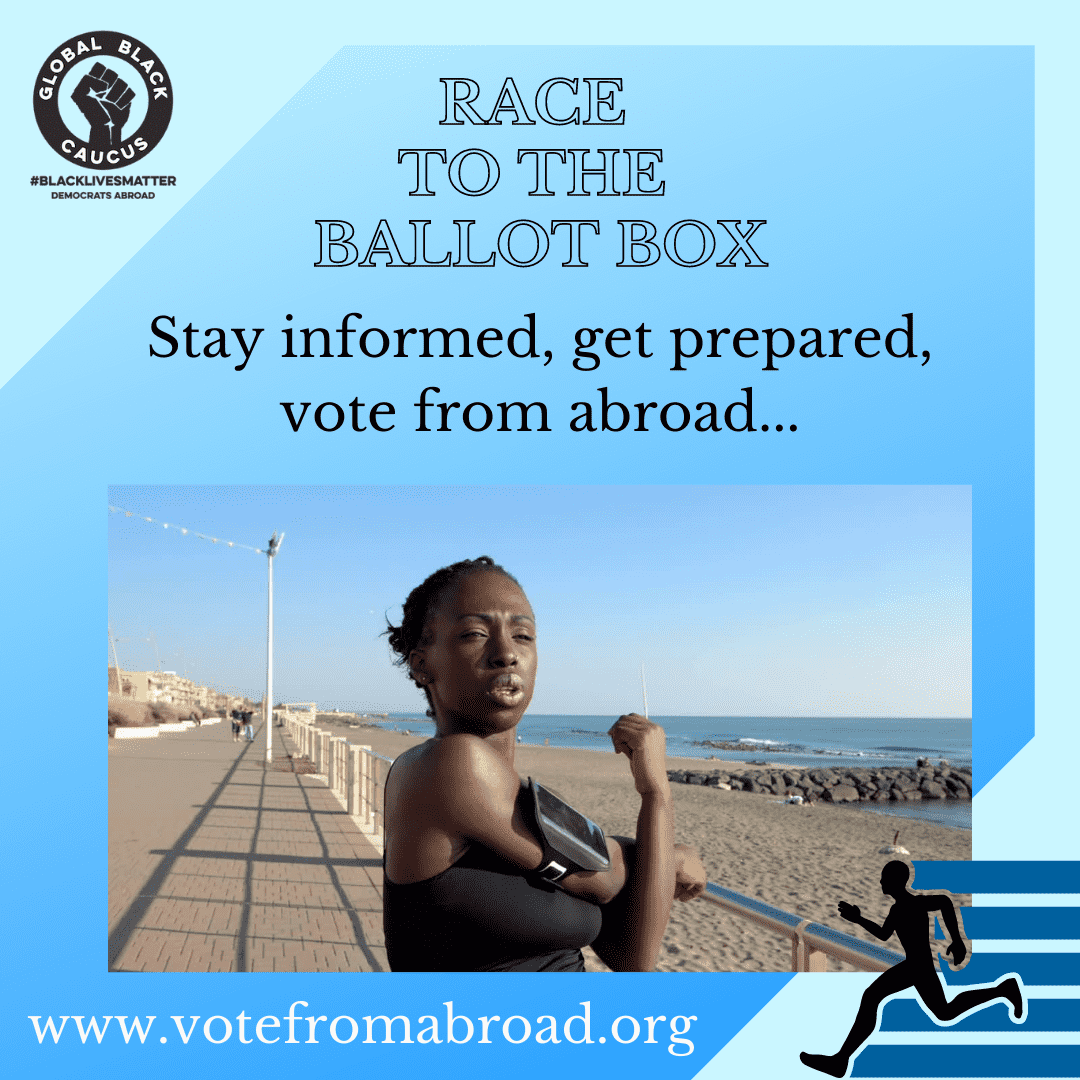 🏃🏿‍♀️Race To Saving Our Democracy 🏃🏿‍♂️

❖ Hold & Expand our Senate seats so that we can get rid of the filibuster, don’t have to rely on Sens Manchin and Sinema, and can finally pass popular measures that a majority of Americans want. This means, at a minimum, defending the toughest seats to hold (GA, AZ, NH, and NV) and flipping the 3 seats where we already hold statewide leadership positions (NC, WI, and PA).

❖ Hold the House so that we can continue to pass extraordinary measures that help the American People. Every state has vulnerable Dems who need protection to flip seats.

❖ Give President Biden two more years (at least) to govern with both chambers of Congress so that the seeds he’s planted with ARP, the Infrastructure package and other efforts across government can sprout and bloom and so that he can pass voter protection reform and Build Back Better. 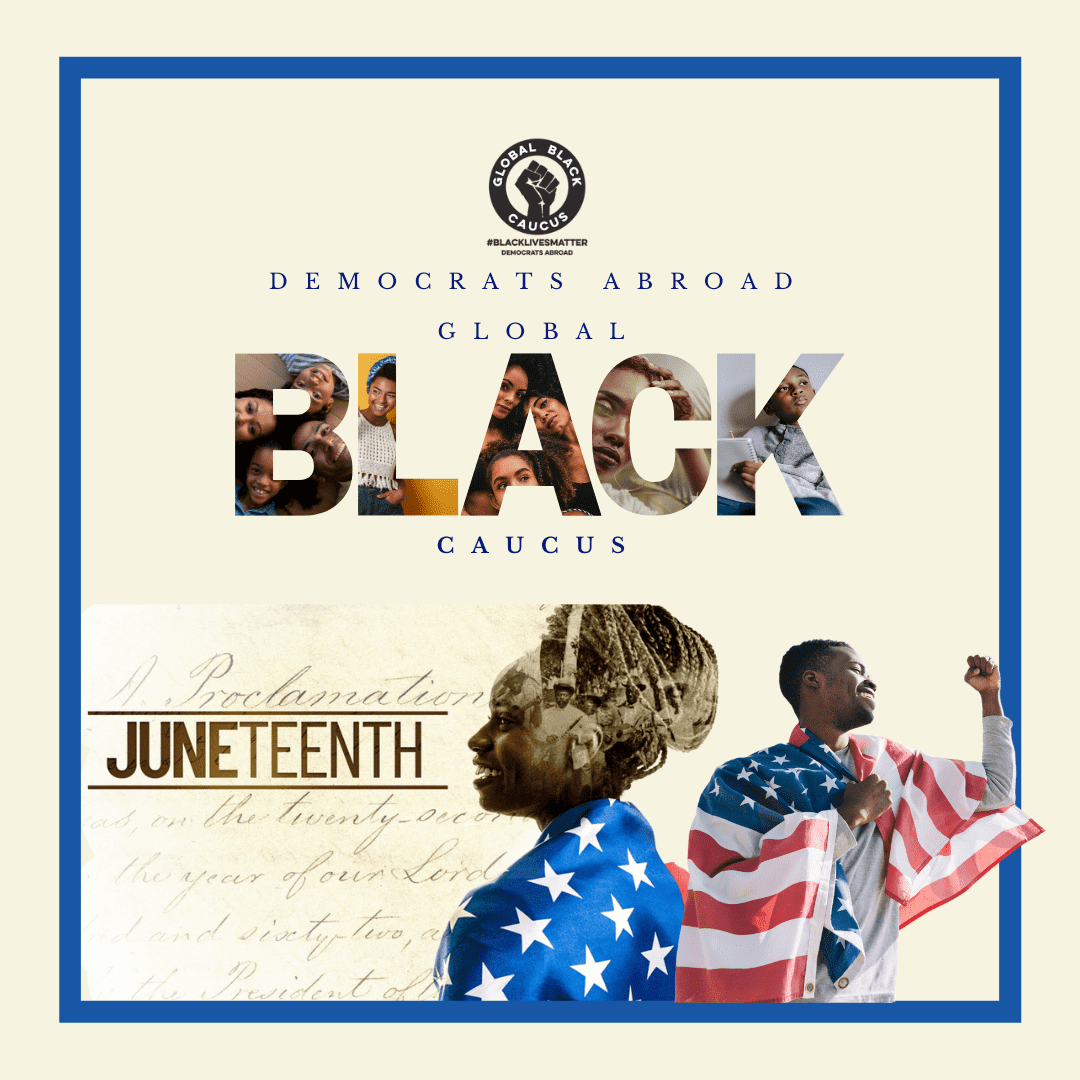 One year ago, President Joe Biden signed into law a measure establishing June 19 as Juneteenth National Independence Day - commemorating the end of slavery in the United States. 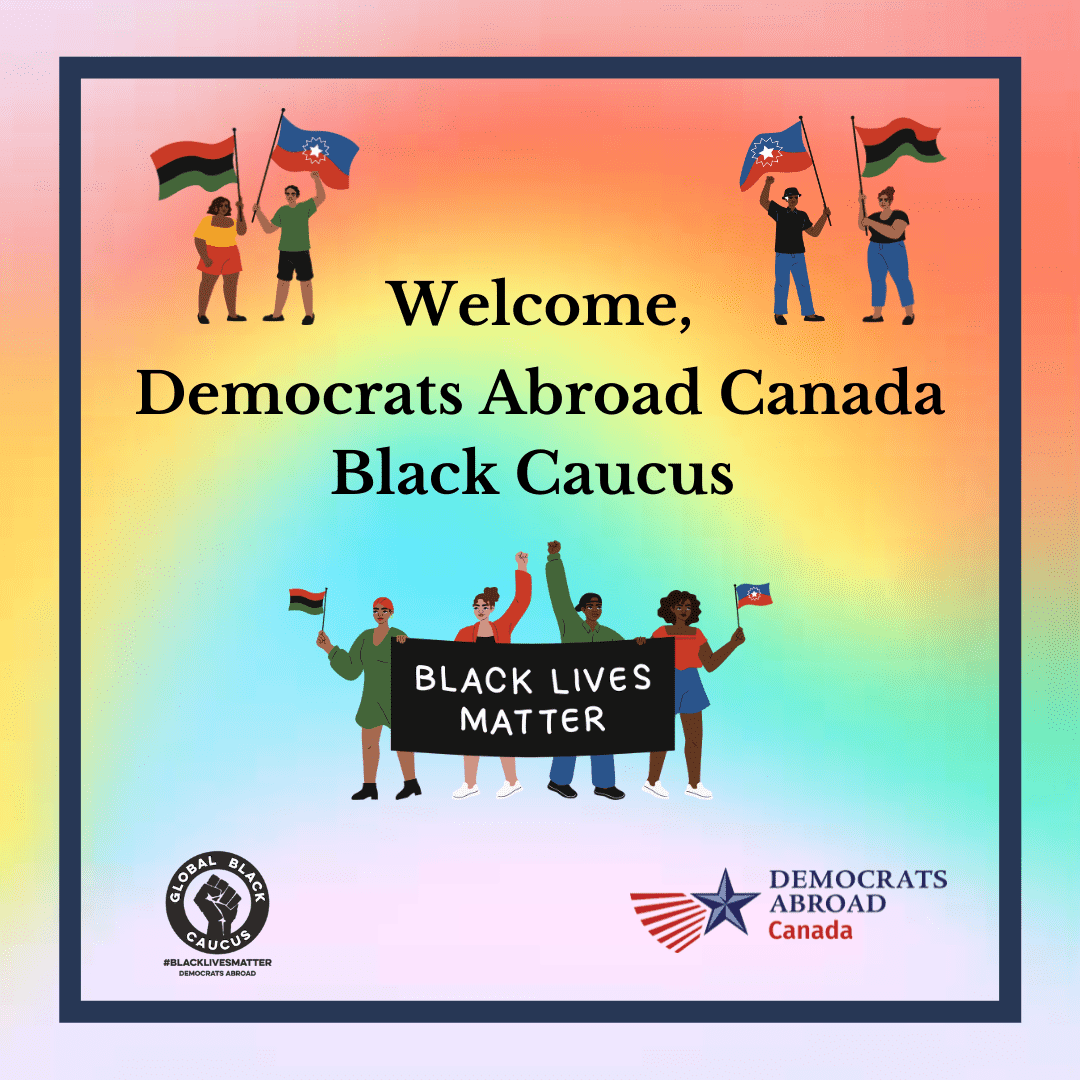 Right on time for #Juneteenth , the Democrats Abroad Global Black Caucus is welcoming the newly formed Democrats Abroad Canada Black Caucus to the family. The GBC couldn’t be more proud of Star Goggins, Dr. Laura Allen, and Larry Rousseau for stepping up and being a force for positive change.

With the midterm elections coming in November, the new formation of this Caucus is very timely to help give the Black Indigenous People Of Color, short BIPOC, community voice in seeking representation to address many issues of injustice in our community including biases, violence, and voter suppression.

The DA Canada Black Caucus can help provide a forum for African Americans living in Canada to engage in discussion, become more informed, and advocate for issues of concern to Black Americans.

The Caucus is open to all Democrats Abroad in Canada, and we invite your support and input as we all face these challenges against democracy.

Become a member and help motivate, inspire, and get our Black Brothers & Sisters out to vote.

Are you interested in becoming a member of the DACA Black Caucus or would like to volunteer, please email the DA Canada Chair, Erin Kotecki-Vest at [email protected] 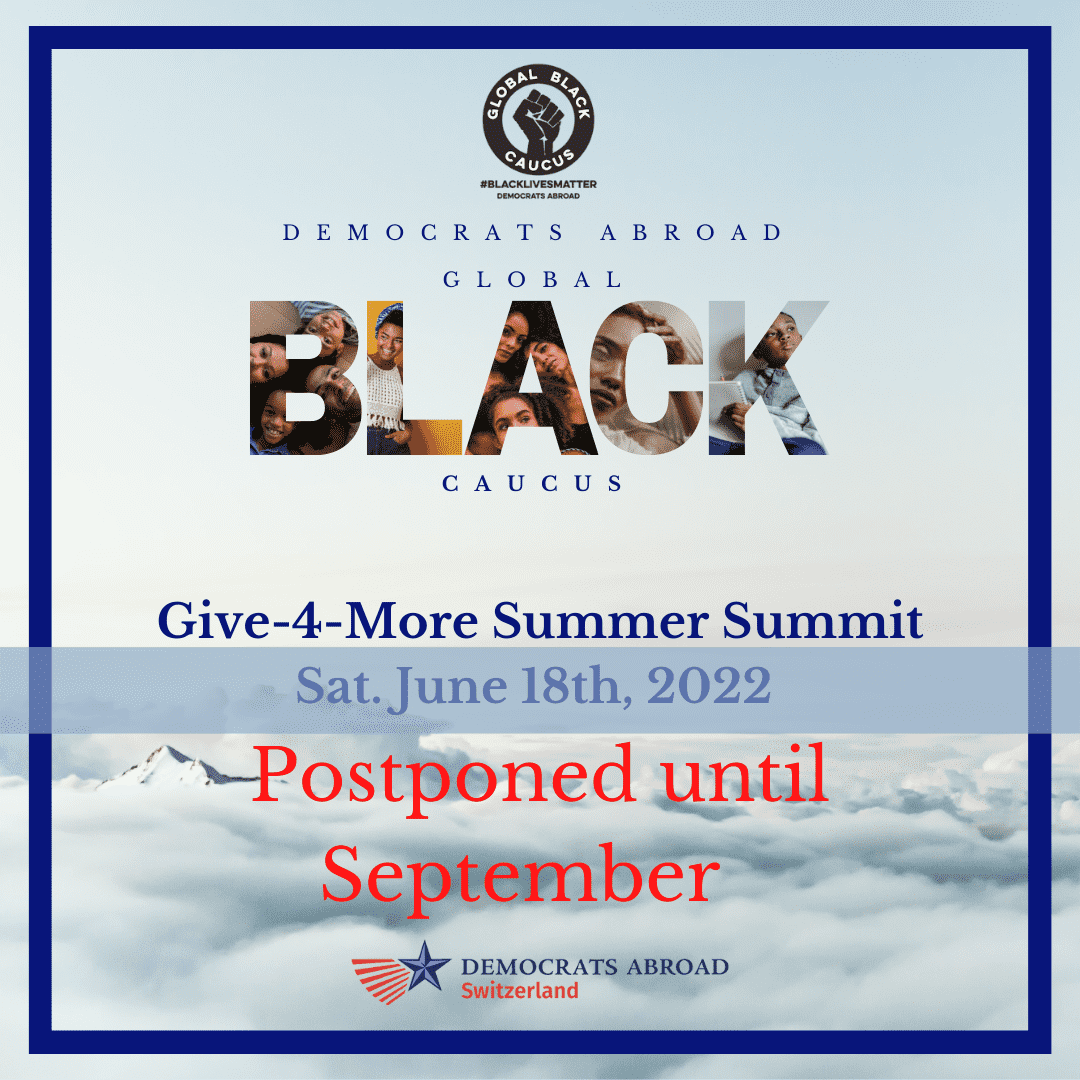 heavy-hearted we have decided to postpone the GBC Give-4-More Summer Summit until September 2022. If you are in town and inclined, I will be at Fork & Bottle and would be happy to meet up with you for a chilled drink at 17:30 after Zurich Pride. (Perfect place for shade and tranquility after the parade.)

Thank you very much to all who offered to volunteer and to all who were interested in joining the event. 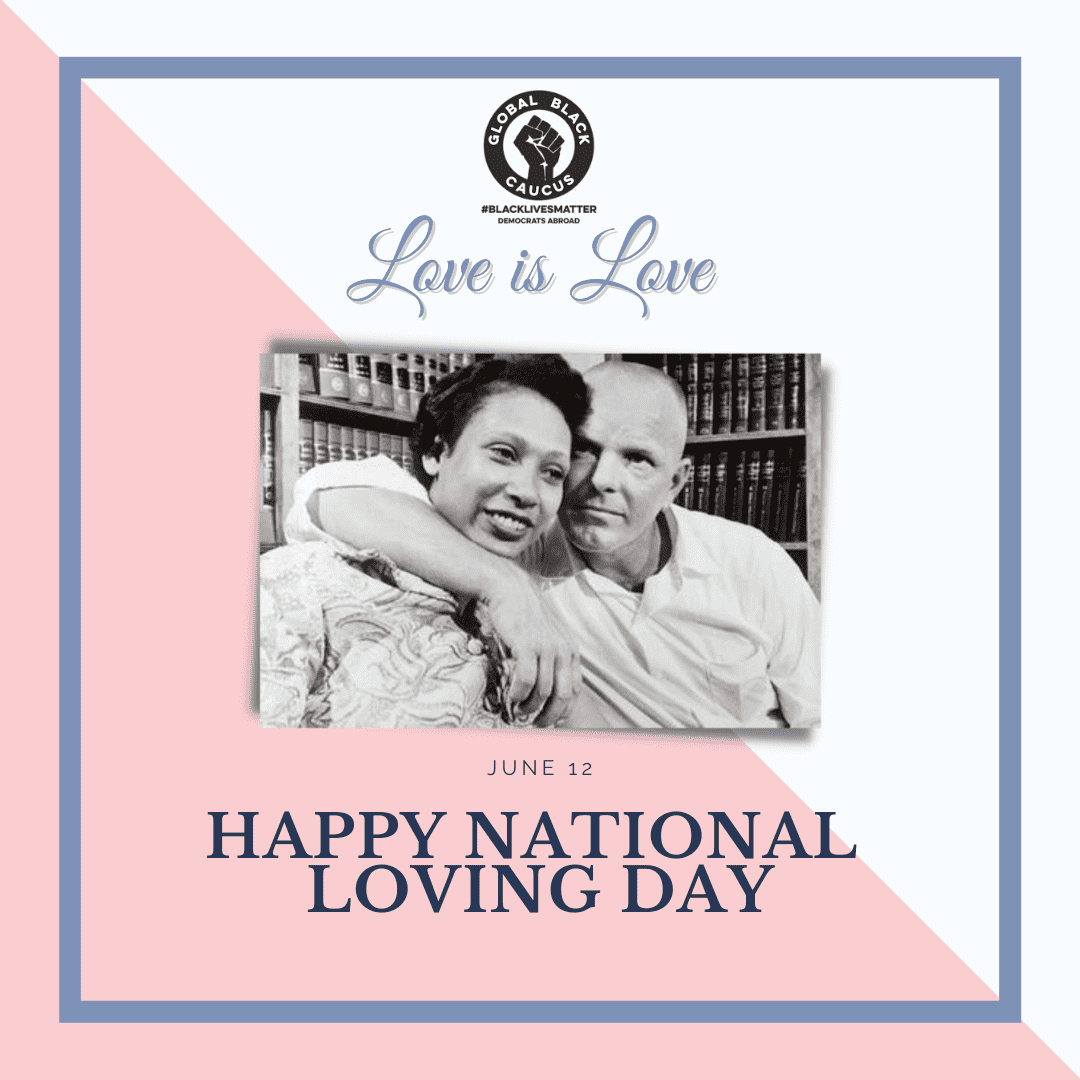 “Tell the court I love my wife, and it is just unfair that I can’t live with her in Virginia.”

Our work to end discrimination and racial injustice continue.

Remembering Pulse Nightclub tragedy. We owe it to them! 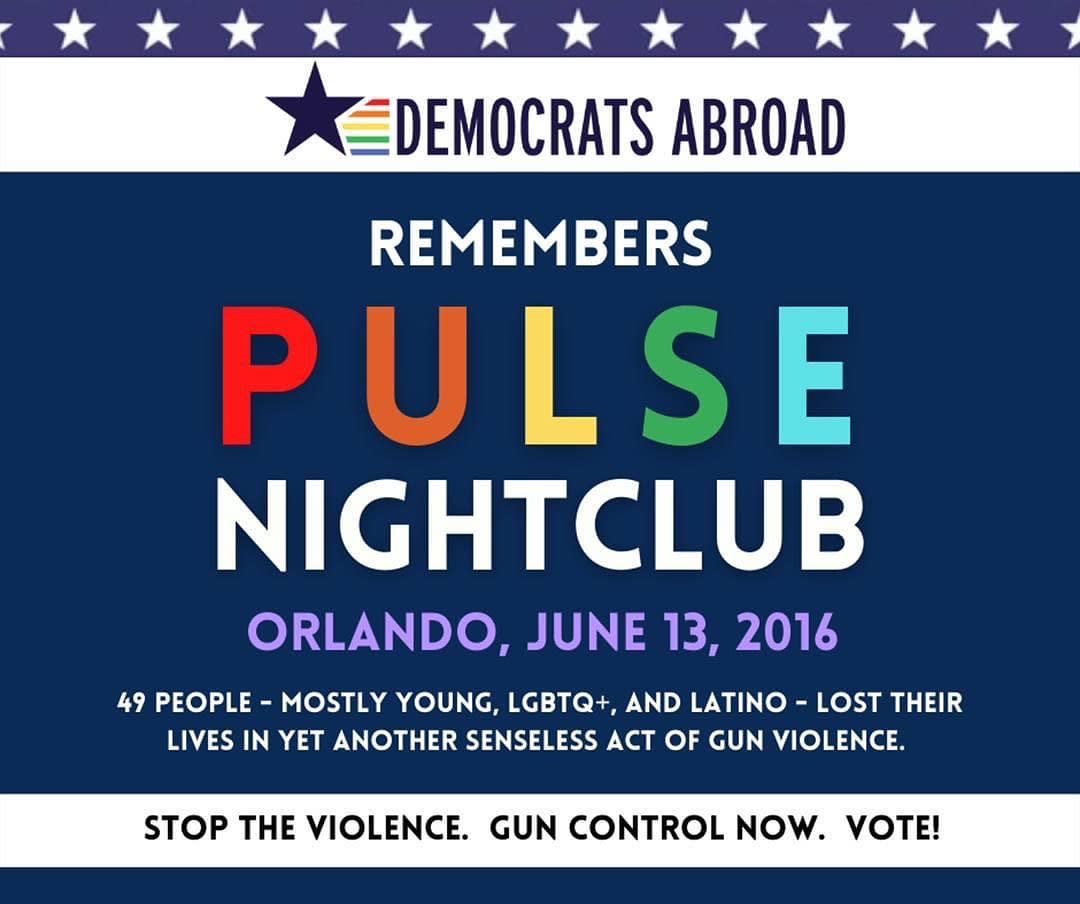 Today, June 13 we remember the 49 people killed and 53 wounded at Pulse Nightclub in Orlando, Florida.

As these last few weeks bring gun violence to center stage once again, we are reminded of the horrific tragedy that unfolded just 6 years ago against the LGBTIQ+ community. We must do better, we owe it to them! 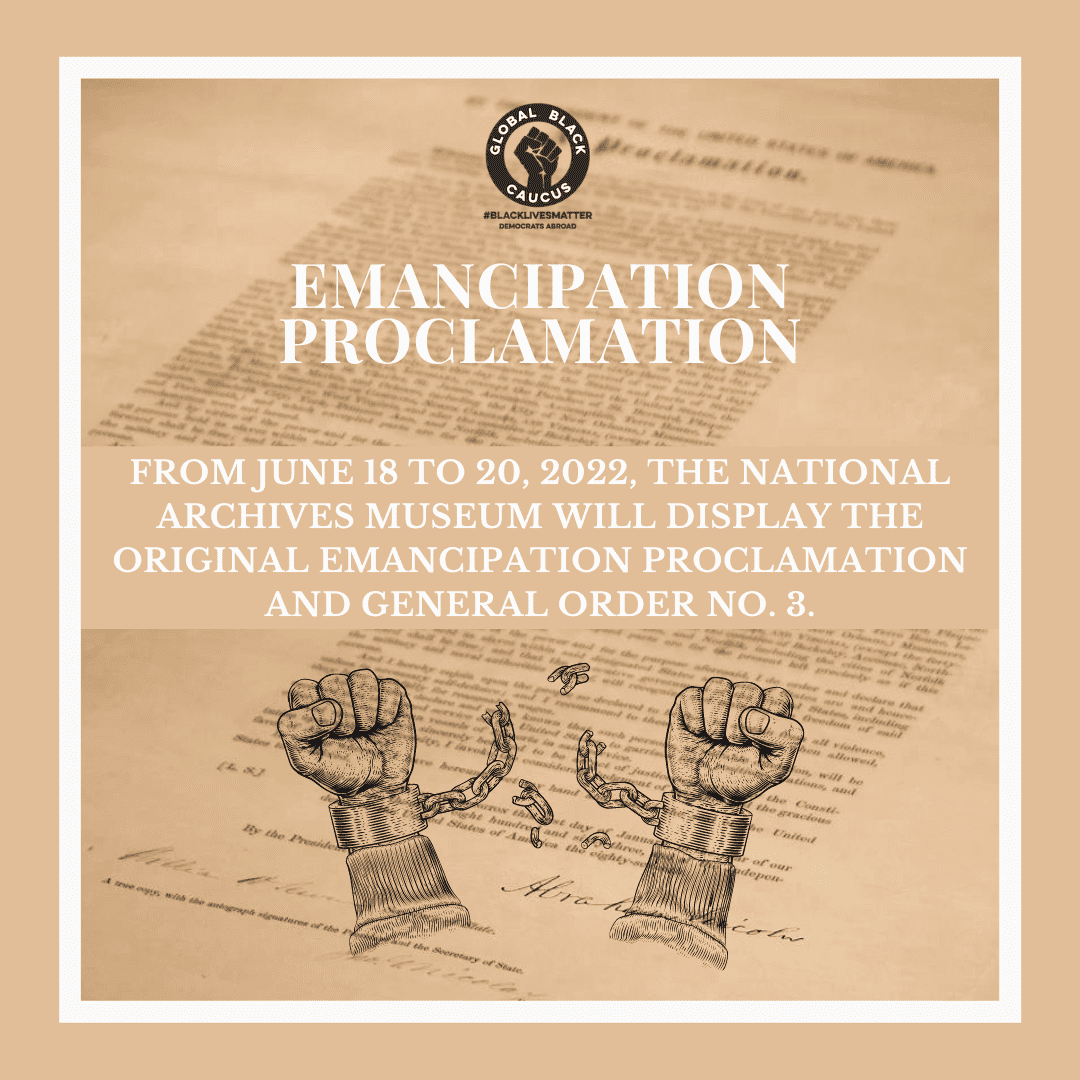 From June 18 to 20, 2022, the National Archives Museum will display the original Emancipation Proclamation and General Order No. 3.

Timed ticket entry is available but not required. Reserve a ticket at https://www.recreation.gov/ticket/facility/234645

The National Archives will host a special Juneteenth Family Day on Saturday, June 18, from 10 a.m. to 2 p.m. Related programs include author book talks and a panel discussion with a musical performance.

President Abraham Lincoln issued the Emancipation Proclamation on January 1, 1863, as the nation approached the third year of the Civil War. Lincoln’s proclamation, which declared “that all persons held as slaves” within the rebellious states “are, and henceforward shall be free,” was “a fit and necessary war measure for suppressing the rebellion.” The Proclamation also declared the acceptance of Black men into military service. By the war’s end, almost 200,000 Black soldiers and sailors had fought for the Union and freedom.

Despite its expansive wording, the Emancipation Proclamation was limited. The freedom it promised was dependent upon a Union victory in the war. It also only applied in 10 Confederate states, leaving more than half a million men, women, and children in bondage in parts of the Confederacy already under Northern control and in the loyal border states.
Nevertheless, the Emancipation Proclamation promised Freedom and a new beginning for several million Americans and fundamentally transformed the character of the war. It recognized the moral force behind the Union's cause and strengthened the Union both militarily and politically. As a milestone along the road to chattel slavery's final destruction, the Emancipation Proclamation has assumed a place among the great documents of the nation.

On June 19, 1865, the freedom promised in the Emancipation Proclamation was finally delivered to 250,000 people who remained enslaved in Texas two and a half years after President Lincoln’s historic proclamation and two months after Union victory in the Civil War.

U.S. Maj. Gen. Gordon Granger issued General Order No. 3, which informed the people of Texas that all enslaved persons in the state were now free. This day has come to be known as Juneteenth, a combination of June and 19th. It is also called Freedom Day or Emancipation Day, and it is the oldest known celebration commemorating the end of slavery in the United States.

Emancipation, however, was not a singular event in United States history. There were many emancipation days as enslaved people obtained their freedom in the decades-spanning American independence through the Civil War. They were an important element of the abolition movement, which fought to end chattel slavery and liberate the millions held in bondage across the country. That goal was not fully realized until December 6, 1865, when the requisite number of states ratified the 13th Amendment to the Constitution, legally ending slavery in the United States.

While Juneteenth has been formally celebrated primarily by people in African American communities in Texas, nearly all states and the District of Columbia recognize Juneteenth as an official state holiday or observance. On June 17, 2021, President Joe Biden signed a bill into law establishing Juneteenth as a federal holiday. 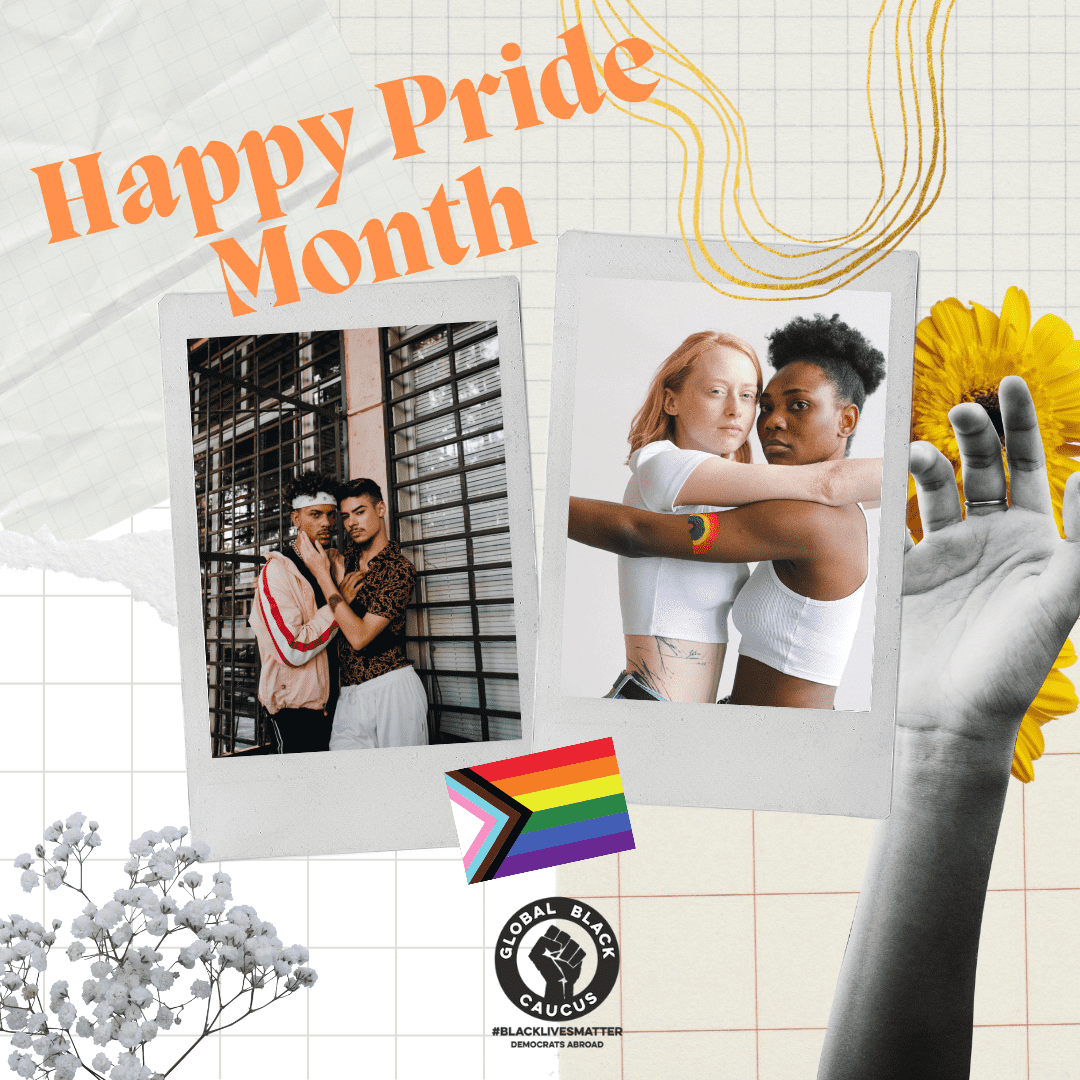 Here's a reminder that BIPOC has always been at the center of 2SLGBTQIA+ culture and resistance. Pride must be accessible and intersectional, and it must center the experiences and acknowledge the work of BIPOC communities. All year, not just in June or at a parade. 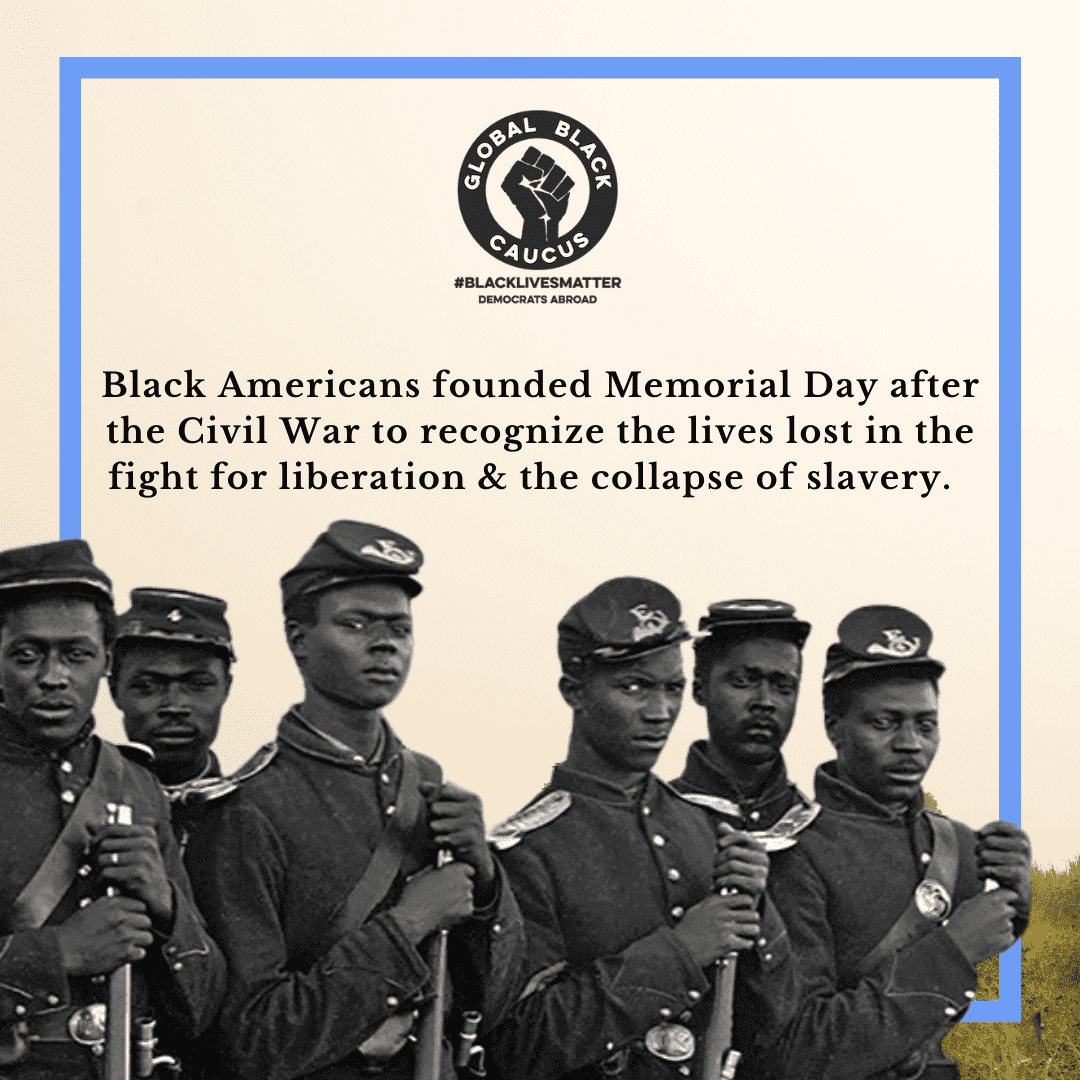 Memorial Day, formally known as Decoration Day, was originally started by a group of African Americans. The History Channel and many credible historians have confirmed that the popular holiday was, in fact, initially an event held by newly liberated Blacks in Charleston, South Carolina. It happened on May 1, 1865 right after the Civil War ended. 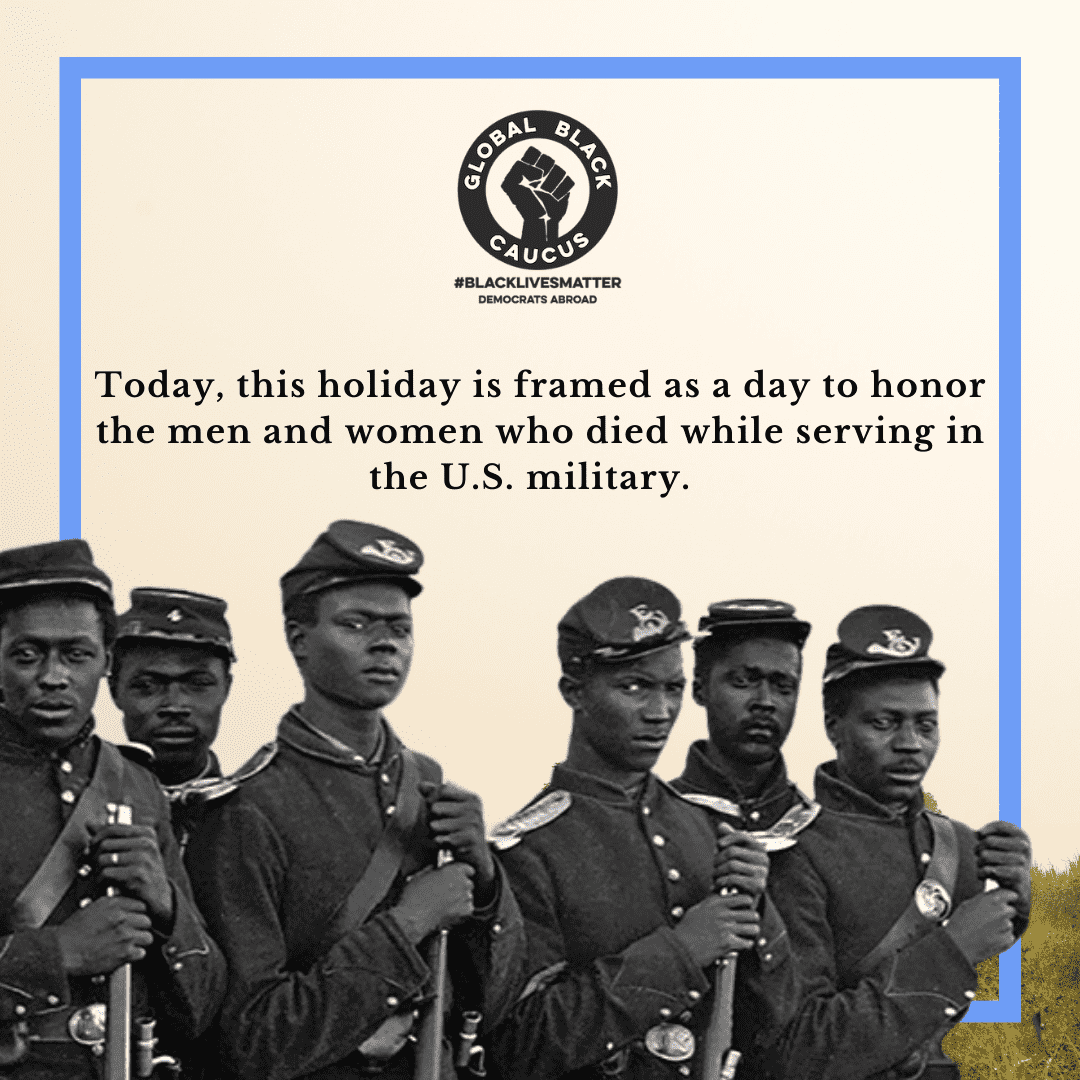 Thousands of newly freed slaves and regiments of the U.S. Colored Troops gathered to march around a Confederate Army prison camp in honor of the unnamed fallen Union soldiers who fought for their freedom.

Also in attendance were thousands of Black women and children who reportedly sang hymns and carried flowers, wreaths, and crosses.

And then the holiday was whitewashed... 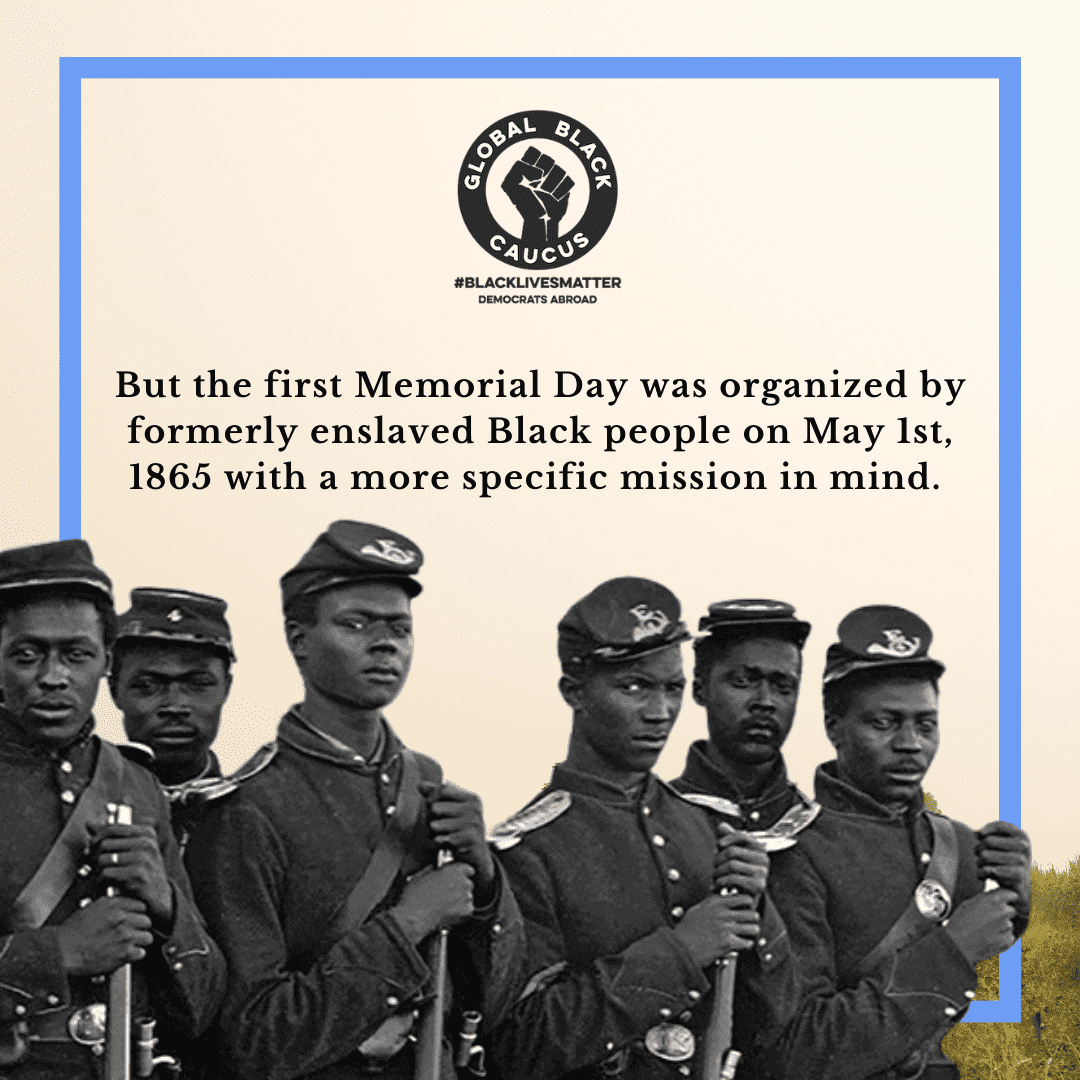 Historian and author, David W. Blight, said in his book Race and Reunion: The Civil War in American Memory that years later African Americans were suddenly erased from the story at the end of Reconstruction. 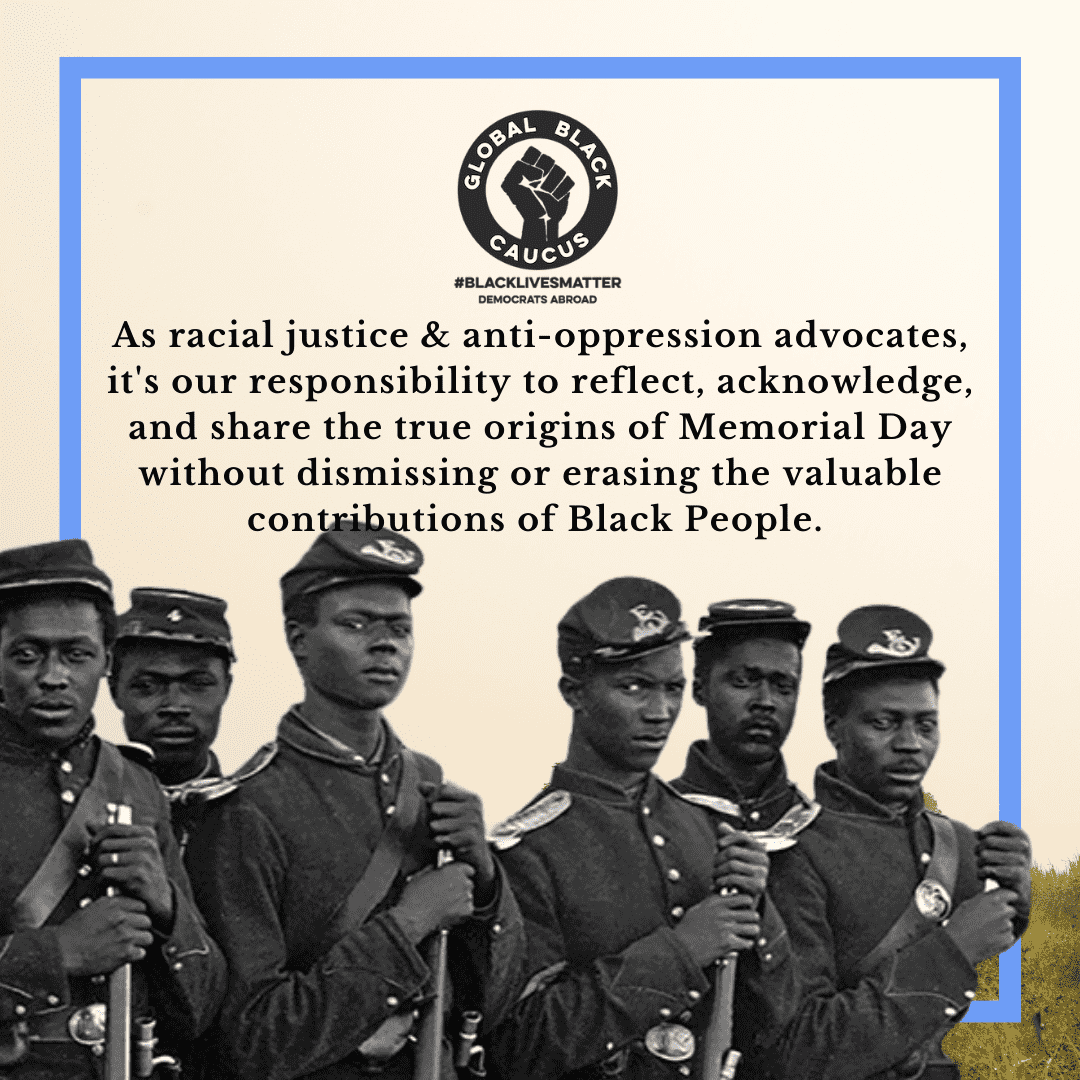 Yes, that's right. A day that originally celebrated Black liberation was now being utilized for white supremacy, and it apparently all started from an 1865 article that was published in the Charleston Daily Courier that tried to discredit the facts.

After discovering that news article, many historians have agreed that after being freed, one of the first things this group of African Americans did was gather to pay tribute to those who died while fighting for freedom. Sadly, you usually don't hear that part of the story. 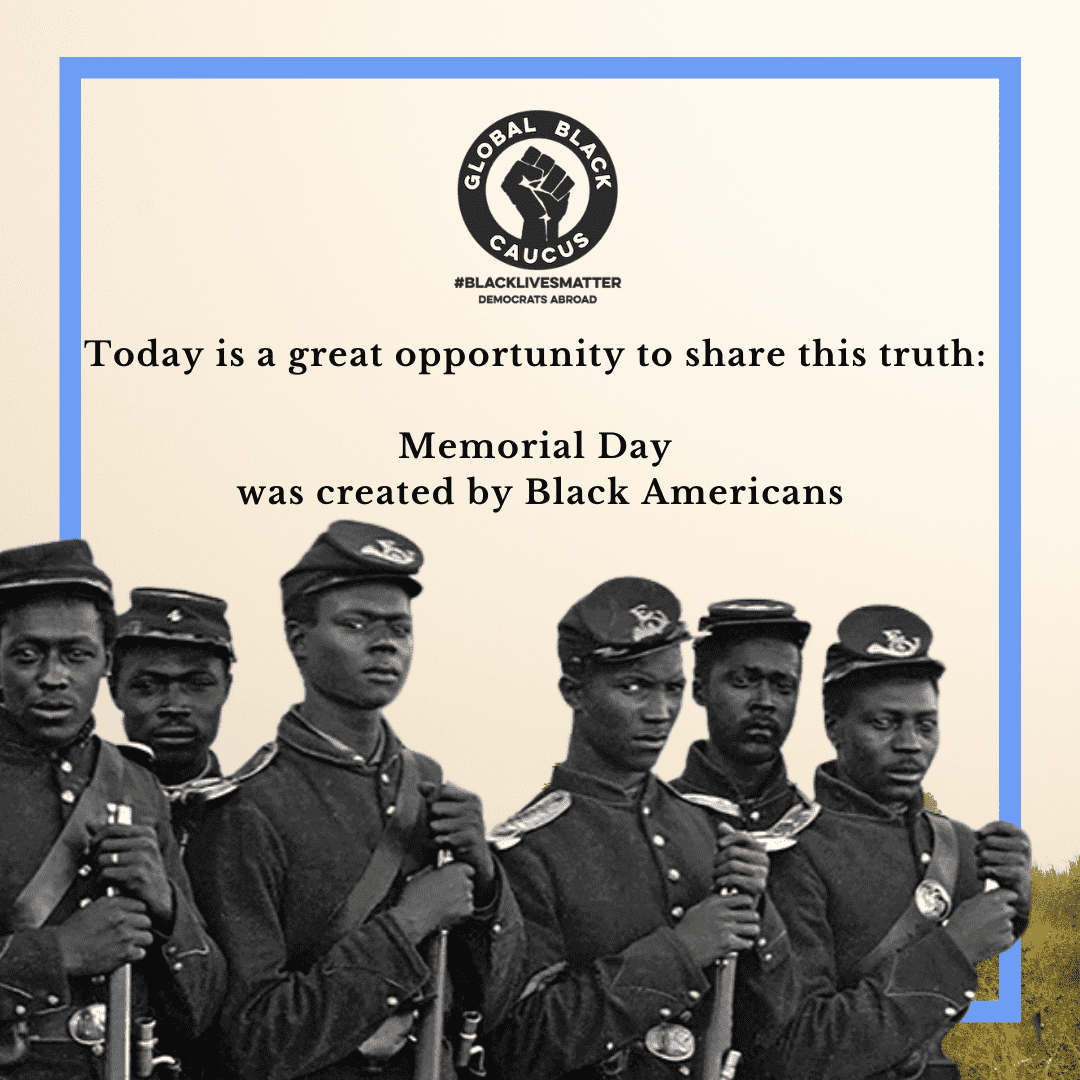 According to LiberationSchool.org, "the spirit of the first Decoration Day - the struggle for Black liberation and the fight against racism - has unfortunately been whitewashed from the modern Memorial Day."