Yes, our worst fears have been realized – both houses of Congress have produced bills that vastly favor corporations and the wealthy and well-connected; they blow out the deficit and foreshadow cuts to critical federal programs; they won’t grow the economy or bring back jobs from overseas; they are unlikely to inspire businesses to hire more people and pay them better; and they completely neglect the Americans abroad community.

But the fight’s not over. This week the House and Senate will form a Conference Committee to reconcile discrepancies between the bills they each passed, meaning we have one more chance to stop Congress before it's too late  — and we need everyone's help!

Please contact your elected representatives by phone AND email to tell them we need a better tax plan for working Americans.

Call your Congressional Representatives today. Tell them to fight back against the Trickle Down Tax Scam, or vote NO when the bill comes to the floor.

My name is  _________________.  I vote in [your district/state] and I live in [name of country].  Although I live abroad I am deeply concerned about US tax policy and the impact it has on the welfare of the country.  I’m very disappointed at the process Congressional leaders have taken to rush through tax reform and I am utterly appalled that they have chosen to prioritize tax cuts for corporations, the wealthy and the well-connected over tax cuts for working class Americans.

I do not and will never believe in Trickle Down Economics.

We all know it is a fraud – the only mystery is why Congressional leaders think that we will accept it anyway.  I do not.

I urge the [Senator/Congresswo/man] to fight through the Conference process for a better deal for working Americans.  I urge [her/him] to vote NO if the bill that comes to the floor repeals the individual mandate and explodes the deficit because of the enormous tax cuts for corporations and wealthy Americans who do not need them.

Lastly, we Americans abroad have been left out of tax reform entirely.  We will continue to suffer under the existing system that subjects us to taxation both in the US and our country of residence, subjecting us to enormous filing cost and complexity.

We may be abroad but we are not absent from the debate - or the ballot box.  Please fight for hard working Americans no matter where they live.  Please fight for a better tax package for us all and vote NO in the Conference bill doesn’t provide it.

Thank you very much for your time and for your support.

Use this link to message elected officials from the easy-to-use Democracy.io platform: http://bit.ly/aBetterTaxPackage.
You must use your USA voting address.

I vote in [State-Congressional District] and I live in [country of residence].

Although I live abroad I am deeply concerned about US tax policy and the impact it has on the welfare of the country.  I’m very disappointed at the process Congressional leaders have taken to rush through tax reform and I am utterly appalled that they have chosen to prioritize tax cuts for corporations, the wealthy and the well-connected over tax cuts for working class Americans.

[If you want to highlight a particular issue that concerns you: I am especially concerned about (see resource links below for details)]

No matter how many times I hear it, I will never believe the tax cuts Congress is giving to large corporations and wealthy Americans – who don’t even need them – will trickle down to people like me.   In fact, my fear is that in the next few months Congress will compound the problems caused by this tax package by making drastic cuts to programs like Medicare, Social Security or other federal programs that help the most vulnerable among us.

[Personal story about someone who relies on a federal program that will be jeopardized, if you have one.]

Further, the bill includes no provisions whatsoever to address the tax problems of Americans who live abroad.  Filing taxes on income earned abroad is incredibly complex, expensive and unjust.  Many of us pay hundreds or thousands of dollars for help filing the forms that show there is no tax to pay.  Those of us who do owe are paying tax on the same dollar of income to both the US and our country of residence.  Every American abroad would like to stop paying twice.

[Personal story about your tax situation, if you please.]

If the US had a system of residency-based taxation, like nearly every other nation, then I’d still be required to report my US-based income to the IRS, but not the income I make in and pay tax on to [name of country].

This tax package doesn’t help me or any working class American.  In fact, we know that it was designed to please political donors and that’s what really hurts.  Please fight for a better tax package for us and not them.  Please vote NO on if the tax bill that comes out of the Conference Committee repeals the individual mandate and explodes the deficit because of its enormous tax cuts for corporations and the wealthy.

No time to quit!

Share this information with Americans abroad that are as concerned as you are about the cost, stress and inefficiency of reporting income and financial accounts abroad.

Give to support the tax advocacy work of Democrats Abroad by clicking on this link and scrolling down to Tax Reform Advocacy. Three giving levels available: $25, $50 and $100

Vote from abroad in every election in which you are eligible. It’s the best way to show our members of Congress that we are abroad but we are not absent.

Background on Residency Based Taxation (RBT)

We are asking for:

Further, Democrats Abroad reaffirms its request for the establishment of a Commission on Americans Abroad to study and reform laws and regulations that have unintended adverse consequences for us (H.R. 2710) and for an exemption for Americans abroad from reporting on the financial accounts we hold in our country of residence (H.R. 2136).

Democrats Abroad and other online resources on Residency Based Taxation (RBT):

For more information message us at [email protected] 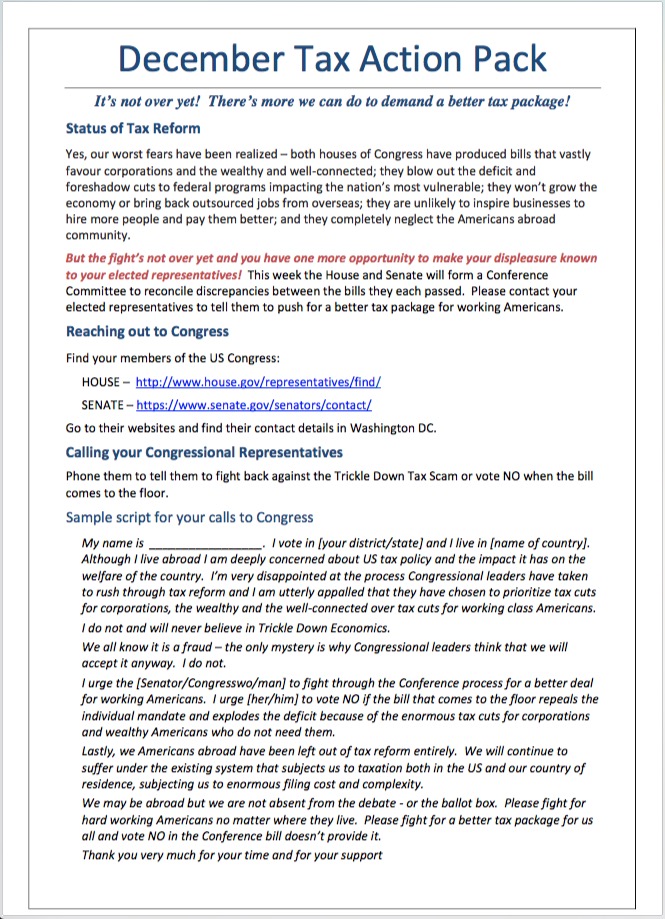