The Democrats Abroad Taxation Task Force will be meeting with Congressional Leaders in Washington DC next week to discuss tax advocacy priorities including but not limited to residency based taxation, simplified filing, FATCA reform, and GILTI.

The team is currently very busy confirming meetings and preparing for the visit.

Many offices are not doing in-person meetings due to COVID, and so virtual meetings are being scheduled for the week of June 13.

A summary of progress made during this concentrated effort of tax advocacy will be shared later in June.

Democrats Abroad hosted its annual global meeting on May 21-22. On the agenda, Saturday was allocated for presentations focused on mobilizing the overseas vote in this critical midterm election year, while Sunday's agenda focused on internal business.

The DA charter amendments are updates and changes made to the document that outlines the rules that DA follows as an organization. There were 8 on the agenda to be voted on.

DA resolutions are broadly, statements made regarding policy and positions where DA stands as an organization. There were 11 on the agenda to be voted on.

On Sunday, 5 non-controversial resolutions were voted on as a package as the first agenda item in the 3 hour period, in an attempt to save time. All 5 of these resolutions passed.

With 1 hour remaining, a motion was made to extend the meeting by 2 hours, but the motion failed. The DPCA accomplished voting on and passing the FEC resolution. Given that time was not extended, the remaining resolutions and none of the Charter Amendments were voted on during the meeting this year.

It is a grave disappointment that the DPCA voting body did not have an opportunity to debate or vote on updating it's position on FATCA. Given the information that has come to light over recent months, it is clear that at the very least a discussion on FATCA is needed to review DA's current position of FATCA reform.

The TTF plans to submit the resolution at the next global meeting, which currently does not have a date set.

For those DA members that are disappointed that DA did not vote on the FATCA resolution last weekend you can email [email protected] and request that your email is forwarded to:

Democrats Abroad is pleased to have spoken as experts at the first ever Congressional American Abroad Caucus Roundtable Discussion on May 23. Over 30 House Members and Congressional staff were in attendance.

The meeting was closed to the public to ensure that Congressional leaders could speak openly about how best to resolve the tax and financial access problems and issues that Americans abroad.

Actions coming out of the meeting included:

On Sunday, May 22nd, the Democrats Abroad voting body (known as the DPCA or Democratic Party Committee Abroad) will meet to vote on the FATCA Repeal resolution that the Taxation Task Force put forward to change Democrats Abroad policy. We are asking all DA members to please add your signature in support of the resolution. It takes only 1 minute.

Click here to add your signature to support the FATCA repeal resolution.

The American Abroad Caucus will be hosting a meeting on Americans abroad tax and financial access issues on May 23rd, we'd like your help to get as many House reps to attend this meeting as possible. Unfortunately, it's not a public meeting, but it's a great opportunity to educate Congress on Americans abroad tax issues, and will get us one step closer to passing legislation that will provide the urgent relief we all need.

This action will only take *20 minutes* and will greatly help us advance our advocacy goals!

Which Tax Strategy is Best for You? Webinar Recording

Here is the recording of the webinar we hosted called Which tax strategy is best for you? This webinar talked about the Foreign Tax Credit versus the Foreign Earned Income Exclusion.

This webinar was free to attend, but please consider donating to help us put on more events like this. The suggested donation for this event is $10. Click here to donate.

What else can you do?

Below is a copy of the submission the Democrats Abroad Global Taxation Task Force submitted to the House Financial Services Committee in advance of the hearing on Oversight of the Financial Crimes Enforcement Network taking place on April 28 at 10am EDT. The TTF strongly encourages Americans abroad to submit their own statement for the record.

Click here to download a pdf of DA's submission to the House Financial Services Committee in full.

What does this mean?
Since FATCA was implemented, Democrats Abroad has advocated on behalf of Americans abroad given the breath of damage it has caused to our lives. It was through Democrats Abroad advocacy work that Rep. Carolyn Maloney (NY-12) introduced H.R.5799 - Overseas Americans Financial Access Act (aka the FATCA Same Country Exception Bill).

The main reasons we have decided to submit this resolution at this time are:

There is no guarantee it will become Democrats Abroad policy at this time. A number of steps need to be taken in order for it to become official DA policy. This Thursday is the deadline to submit resolutions for consideration at the DA annual global meeting that will take place May 21-22 online. Once the resolution is submitted, it is subject to changes based on feedback from DPCA reps and the Resolutions Committee. If the resolution is selected for the agenda at the global meeting, a certain amount of time will be allotted for debate and a vote will take place. Only DPCA reps are able to vote at this meeting, but any DA member can attend and observe.

What is a DPCA rep?

DPCA stands for the Democratic Party Committee Abroad. It is the acronym for the official name of Democrats Abroad. Every DA Country Committee has a certain number of DPCA reps proportionate to the number of DA members in that country. DA holds a meeting once a year called the global meeting, where resolutions are submitted to update DA policy positions. The meeting this year takes place on May 21-22.

How can I help?

REMINDER: If you've not taken the 2022 Democrats Abroad Tax Survey of Americans Abroad yet, there's still time! Go here to take the survey: https://demsabroad.typeform.com/taxsurvey Deadline is April 30. For more information about the survey click here.

Below is a copy of the submission the Democrats Abroad Global Taxation Task Force submitted to the Senate Finance Committee in advance of the hearing The IRS, the President's Fiscal Year 2023 Budget, and the 2022 Filing Season taking place tomorrow at 10am EDT. The TTF strongly encourages Americans abroad to submit their own statement for the record by Thursday, April 21st. Click here to download a pdf of DA's submission to the Senate Finance Committee in full.

We are proud to announce that today, the Democrats Abroad 2022 Tax Survey of Americans abroad has launched!

Please share the survey link with all your American friends and family living abroad, and ask them to share it with people they know too. We need as many people as possible participating in the survey. You do not have to be a Democrats Abroad member to participate. Survey closes April 30th.

For more information go to the survey info page here or read the survey FAQs here.

Listen to the latest episode of the Democrats Abroad Podcast about the survey here. 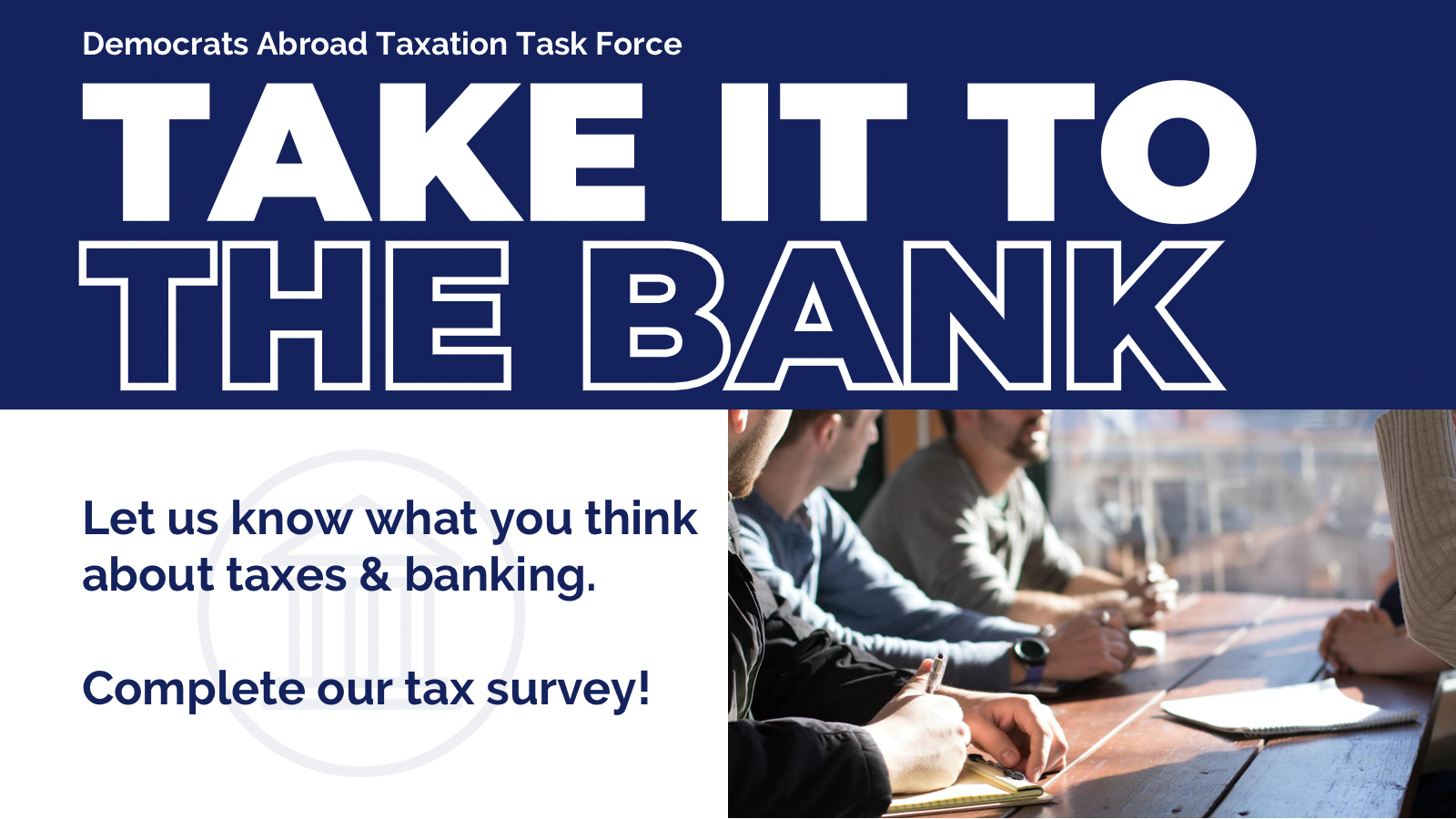