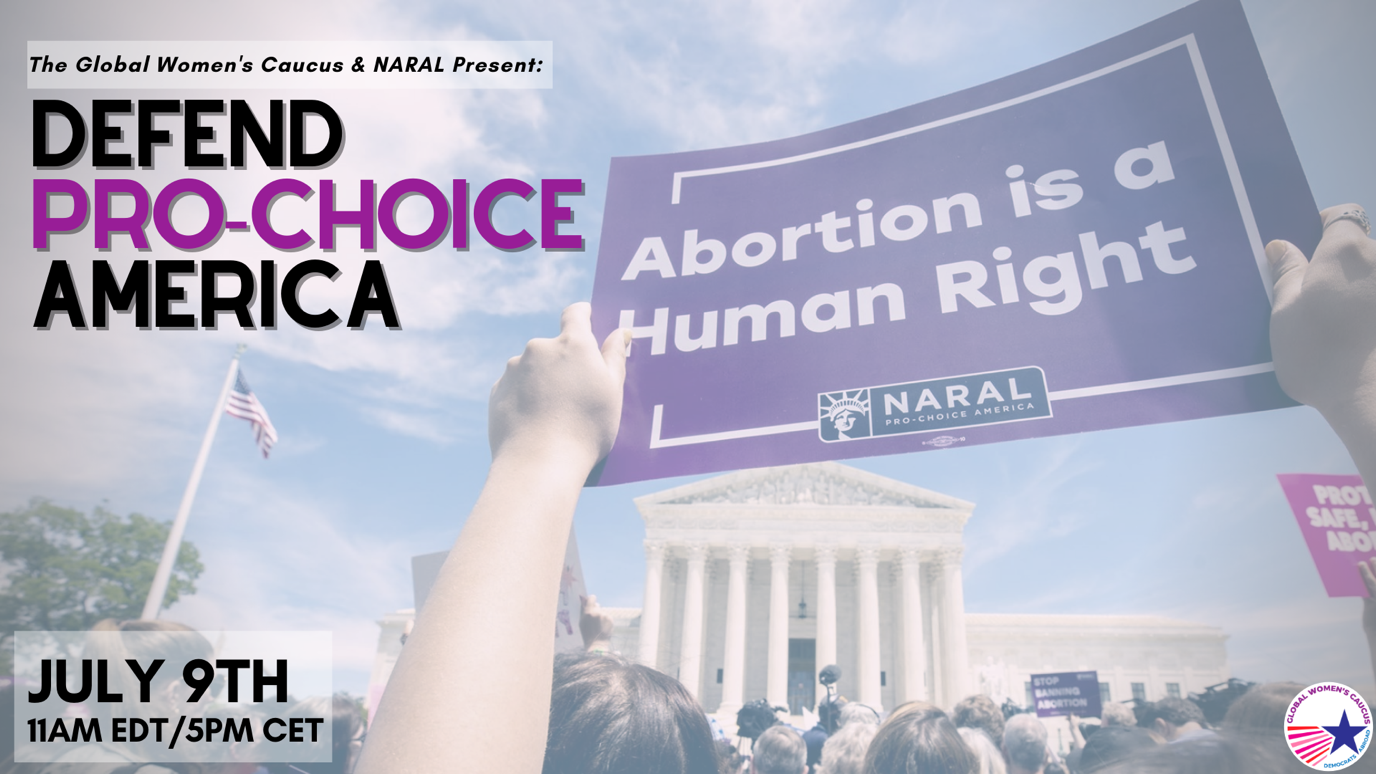 Join the Global Women’s Caucus and NARAL Pro-Choice America for a lively panel discussion with experts who will share the state of anti-choice legislation, the current Supreme Court dilemma, and the status of the Women’s Health Protection Act in Congress.

European abortion legislation will also be discussed as a metric to compare and contrast current and future U.S. policy decisions.

We will open to floor to questions so please do send any questions you would like to ask the panelists to [email protected]. Join us to learn about how bad the situation is, and what we can and should do about the status of women’s reproductive rights!

Salli Anne Swartz. She has been living and working in private practice as an international business lawyer in Paris for over 40 years. Before moving to France in 1979, she was a poverty lawyer in rural Pennsylvania. As a Democrats Abroad leader, she has served as Counsel and Vice Chair for France, as Co-Chair of the Global Women’s Caucus (GWC) and DA Europe Middle East and African Deputy Global counsel, as well as Leader of the GWC Reproductive Justice Action Team. She is a lifelong feminist who has been fighting for women’s rights in Africa and the United States for over 50 years.

Jael Humphrey, Counsel & Associate Director of State Legislative Affairs at NARAL Pro-Choice America. She has worked in law firms, clerked for federal judges, and headed the police misconduct and criminal justice priority area at Lambda Legal. The National Black Lawyers Association named her to the top 40 under 40 in 2015. Jael was previously on the Board of Directors for Law Students for Reproductive Justice and Black Women Build-Baltimore. She earned a BA from Columbia University and graduated from Yale University with a joint degree in law and a masters in international relations.

Christina Krysinski, Counsel & Senior Manager of Policy, NARAL Pro-Choice America. As a member of NARAL’s Government Relations team, Christina works to advance reproductive freedom at the federal and state levels, including by advocating for NARAL’s policy goals to the executive branch and tracking and analyzing policy actions related to reproductive freedom. Christina is originally from Birmingham, Michigan and graduated from the University of Michigan with a Bachelor of Science in Biology and a minor in Gender and Health. Prior to her time at NARAL, Christina earned her J.D. from The George Washington University Law School and worked in health care law and policy.