There’s nothing in ‘The Handmaid’s Tale’ that didn’t happen somewhere. 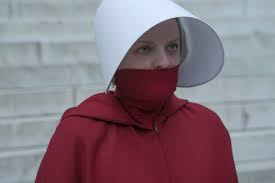 Over half of Americans woke up on November 9th, 2016 to a dystopia they didn’t see coming. How could a society so civil elect a president laser focused on dividing it, rather than conquering it? My partner at the time (now husband) and I had spent the evening prior at a Democrats Abroad event in Cologne, Germany, posing with Hillary Clinton cardboard cutouts, tossing toilet paper printed with Donald Trump’s face around the room to other expats. It was a night of optimism and exuberance. When we arrived home later that evening and turned on the tv, the mood shifted abruptly. Donald Trump was polling well? We stayed up as late as we could, but in the interest of sleep, and with the notion that just like visiting the toilet at a restaurant prompts your food to be at your table when you return, we went to bed, assuming a Hillary victory (you know how that story ends).

I read Margaret Atwood’s 1985 speculative fiction The Handmaid’s Tale sometime in my mid-twenties. Her novel poises America as a split country following a tumultuous civil war (is there any other kind?) The new factions of the former United States consist of a totalitarian patriarchal theocracy known as Gilead and a few remaining strongholds occupied by American rebels. In response to a devastating infertility pandemic, the women of Gilead are sorted and declared one of seven working titles. June, our protagonist, who can be seen marching for women’s rights in the days leading to the civil war, becomes a Handmaid: a fertile woman assigned to a high ranking official for the purpose of breeding. Ranchers and Animal Fancy enthusiasts know their counterparts as mares, heifers, bitches and does. Once a Handmaid's assignment is completed, they are to be reassigned to a new official, until no longer able to reproduce healthy offspring, upon which they are sent out to pasture (colonies covered in nuclear waste they will clean until they die).

It goes without saying - Atwood’s America is a brutally harsh place. But it wasn’t always that way. Throughout the first three seasons of the book’s successful television adaptation, June and other Handmaids have flashbacks to their lives before Gilead. Hints of what’s to come begin as attacks on women’s rights. First their credit cards are all declined - their individual wealth having been rerouted to the account of their closest male relative. Then, employers are forced to fire all female employees, restricting each woman’s duties to her own household. Not much longer, travel is blocked, ICE wielding a heavy hand to keep citizens from emigrating. All the while, many Christian beliefs are quickly adopted and written into law, most notably banning abortion and homosexuality. June and other brave Handmaids refuse to accept this new world order and begin Operation: Mayday, a ploy to topple Gilead.

Reading the book (in my rose colored Obama world), I would have characterized it no more than "speculative fiction," as I would George Orwell’s 1984. This was a reality we had dodged decades ago, with flavors of Nazi Germany extinguished in WW2. That’s not how progress works, right? It doesn’t go backwards. What struck me with the Trump election and the four years that followed was the truth about progress -- that it is not linear, but more akin to a square dance, a constant negotiation. While some progressive laws may stick, others are prey to the whim of swinging door politics. And politics, not passion, it certainly is. Donald Trump, a man formerly of no known theology, standard of ethics or conservative conduct, preyed on the fears of the Republican electorate, turn-coating his entire personal history (much of it recorded on audio and video) to appear like a man of God, aiming to return the nation to His values. The novel's "Sons of Jacob," the political powerhouse running Gilead, appeals to the same conservative notions of piety, while in private, they practice no such thing. In both cases, the ruse worked.

You may be thinking to yourself, “these observations have all been made before, what’s your point?” Well, I'm late to The Handmaid’s Tale series fandom. I gobbled up the first three seasons this March in a manic COVID-exhausted binge. Just shy of my second trimester with my first child, I found myself reassessing my priorities. My new focus: a healthy planet not just for me, but for my child to live on, and finding solace in a future of equity-focused and trusted lawmakers - frankly, an animal-need to protect the future of all children. Watching the world crumble around the Handmaids, I felt like I was doing research into the signals of what now feels like a speculative future. In the first few weeks of this year, wasn’t  a wave of reproductive bans passed or proposed? In the last few months, did we not see an attack on the rights of Transgender children? In a flashback episode to pre-Gilead June, her husband and daughter watch the news helplessly as it’s announced that the President’s been murdered and the Capitol has been overtaken. The heaviness and disbelief of the very real events on January 6th resurged, knocking me sideways. This almost happened in our America and people died. It felt like a fourth-wall breach. It became less a paranoid notion to wonder: is America a safe place to raise a baby? I’d never considered these questions before this year, but now I had a whole new generation to consider past my own and I felt deeply responsible for it.

With the show's fourth season debuting now, I’m holding my breath for June and her Handmaids. I see now that it was a luxury to assume progress would continue in my general favor - in the favor of women. Margaret Atwood says she wrote The Handmaid’s Tale "hoping to fend off [a theocratic dystopia]” and that "a lot of people have been jolted out of political slumber and are paying attention … the Constitution still stands.” I agree with Atwood. As long as the Junes of the world are here, there will be resistance. And when the going gets tough, Atwood  tells us to "support your leaders who are standing against unconstitutional laws; keep informed, as best as possible.” And who are we to argue? She’s been right so far...