U.S. SUPER TUESDAY ELECTIONS WILL ALSO BE IN SWITZERLAND

Ongoing efforts to increase voter turnout in the United States are also targeting U.S. Americans living abroad, including the estimated 20,000 living in Switzerland.

Democrats Abroad Switzerland (DACH) will host three official voting stations in Zurich, Geneva, and Basel between 3-10 March 2020. This “Global Presidential Primary” gives Democrats living abroad the chance to vote in what is considered the 51st state outside the USA. The global event will help decide who will become the Democratic Party’s nominee for U.S. President.

US Americans around the world will have the opportunity to vote for their favorite presidential candidate, beginning on what is historically known as “Super Tuesday” during a presidential election year, the same day 15 other U.S. states, U.S. territories, and Democrats Abroad will cast their ballot.

“It’s crucial that Americans abroad know their votes will be counted - in the global primary as well as in the general election - and that the Democrats Abroad primary is their opportunity to vote for their presidential candidate of choice,” said Julia Bryan, Democrats Abroad International Chair.

During the 2016 presidential election, only 34,000 U.S. citizens participated in the Global Presidential Primary, despite an estimated 9 million Americans living outside of the United States. According to the Swiss Federal Bureau of Statistics, in 2015 there were 19,257 permanent residents from the USA living in Switzerland, and 2,359 temporary residents. In elections where the margin of victory can be very narrow, the goal is to increase voter turnout, both in Switzerland and around the globe.

It should also be noted that a vote in the Global Presidential Primary abroad has greater weight than it does in a voter’s “home” state. While tens of thousands of people will participate in the global primary this year, millions will submit an absentee ballot in a voter's home state. However, based on the delegate representation process, that means a vote in the Global Presidential Primary is up to 4 times more powerful than a vote back home, even in states densely populated like California and New York.

Canvassing efforts, voter registration events, “Let's Get Candid About the Candidates” policy discussions, and other activities facilitated by Democrats Abroad Switzerland, with the intent to rally expat Americans to the polls, have been taking place daily throughout Switzerland leading up to the Global Presidential Primary. To coordinate coverage, please connect with the contacts listed above.

Dates, times, and locations for official USA polling stations located in Switzerland are outlined in the image below. 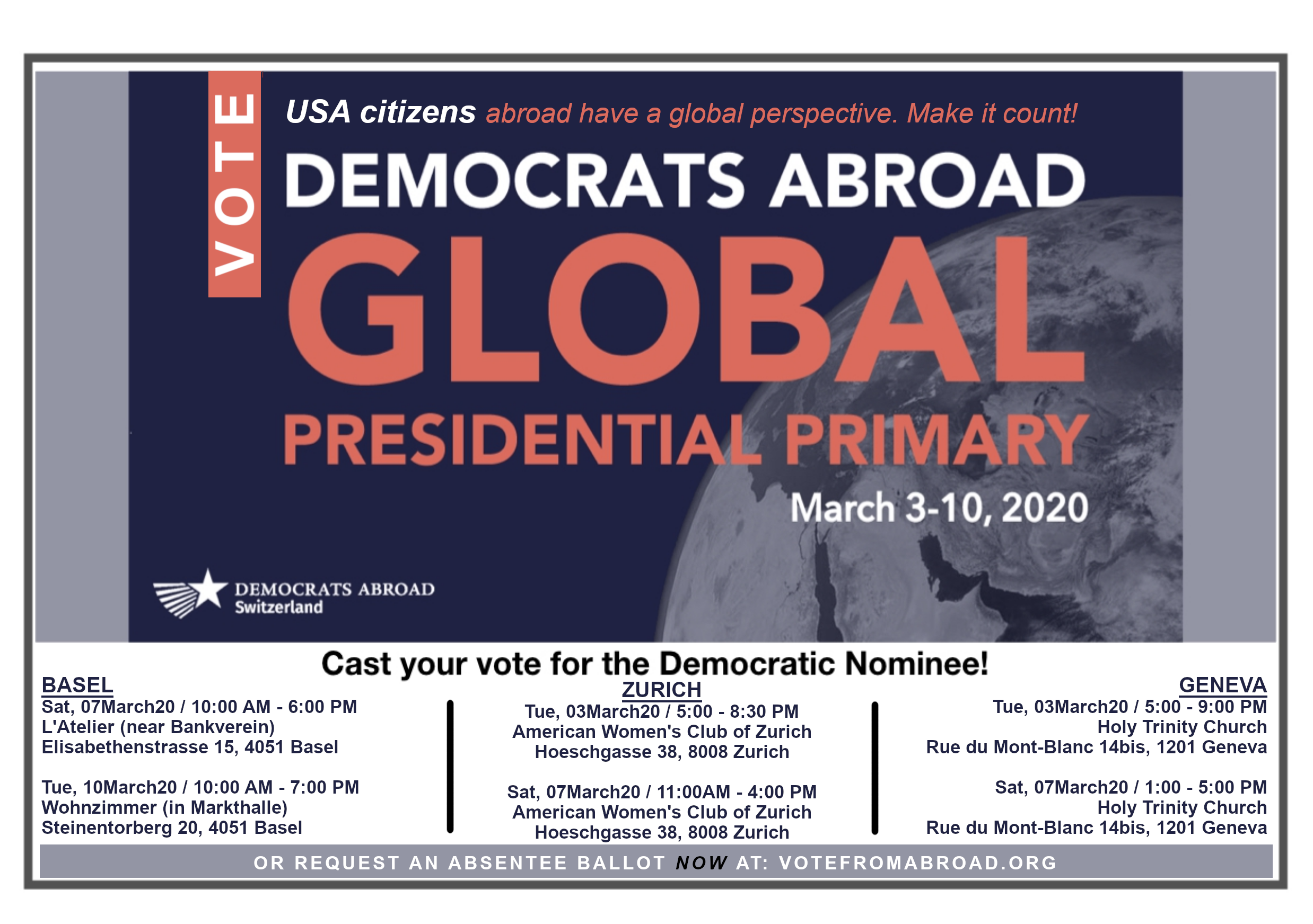 Democrats Abroad Switzerland, the largest organization for Americans living in Switzerland and part of the official Democratic Party arm for the millions of Americans living outside the United States, is calling for members of its Swiss delegation to participate in the Climate Change March in Bern on September 28, part of a Global Climate Strike being held in cities around the world.

The Democratic Party is committed to fighting climate change, one of the greatest threats of our time, and believes participation in this global action, including the march, is a strategic and public way to amplify this message.

The march will begin at 14:00 CET, beginning at the main train station and will end at the Bundesplatz in front of the Federal Parliament Building. Anyone wishing to join the march with Democrats Abroad can visit our website to learn more.