Climate change, environmental protection, clean energy and sustainable development are among the critical issues to be addressed to save our planet. However, the Trump administration has taken the misguided step of pulling the US out of the Paris Climate Accord as well as adopting policies with potentially significant detrimental effects on the environment. In parallel, hundreds of thousands of youth, led by Greta Thurnburg, have launched a global climate change activism movement.

So, what else is happening?

At the federal level, the House of Representatives passed H.R. 9 “Climate Action Now”, which would have prohibited the administration from pulling out of the Paris Climate Accord, under which the U.S. promised to reduce carbon pollution by at least 26 percent below 2005 levels by 2025, only to be blocked by the Senate.

To fill the current void of federal leadership on climate in the US, several multi-state actions have been launched under the leadership of governors and state legislatures.

Here in France, we have the Democrats Abroad France Environment Policy Group (EPG), which has been active for ten years and has presented numerous speakers and subjects to members. The group is co-chaired by Dana Powers (an expert environmentalist and contributor to the New York Times on environment) and Cara Maesano (physicist and expert on climate change) with the participation of Jim Christiansen (who works in alternative and renewable energy development). The EPG has worked on the 2016 Democrats Abroad Platform (see Environment & Climate Change, pp. 54-59), and has submitted proposals (after “kitchen table” meetings) for 2020! 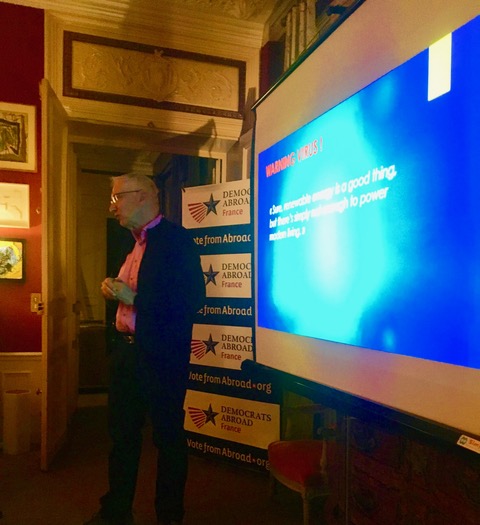 To further our understanding of the potential of solar energy here in France, the EPG invited one of our own leaders, Dennis Shibut, to share his knowledge and research on what is possible from solar energy in France. He has travelled around the country to share his findings with the Avignon, Toulouse, Lyon and Strasbourg Chapters.

Currently 70 percent of France’s electricity is supplied by 59 nuclear reactors. This energy production is headed off a cliff: in the next 15 years when most of these reactors will have reached their end-of-design-life and must be replaced. Dennis’s presentation offered a practical road map to a cleaner, brighter future for everyone based on the increased use of solar energy. His presentation is based on an article written for the 2015 COP21 world climate conference in Paris. The findings in this presentation were reported by the French press and radio. In 2017, it was the opening presentation at the European Solar Summit.

About Dennis Shibut: Dennis is a physicist and former researcher for NASA’s Skylab mission, as well as for the US Coast and Geodetic Survey in the first studies in ocean-atmospheric energy exchange. He has taught physics at the university and community college levels.

Dennis is a long-time enlightened environmentalist. Since the late 1990s he has written numerous articles about green living through his website Kyoto Action Report. Dennis is a member of several prominent environmental advocacy organizations such as the Sierra Club and the Union of Concerned Scientists. In France, Dennis is an “Ambassador” for a 100% green electricity utility company.  A long-time resident of Avignon, Dennis has twice been Chair of DA Avignon and twice Vice-Chair.