SPECIAL LETTER to the EDITOR/OP-ED CAMPAIGN 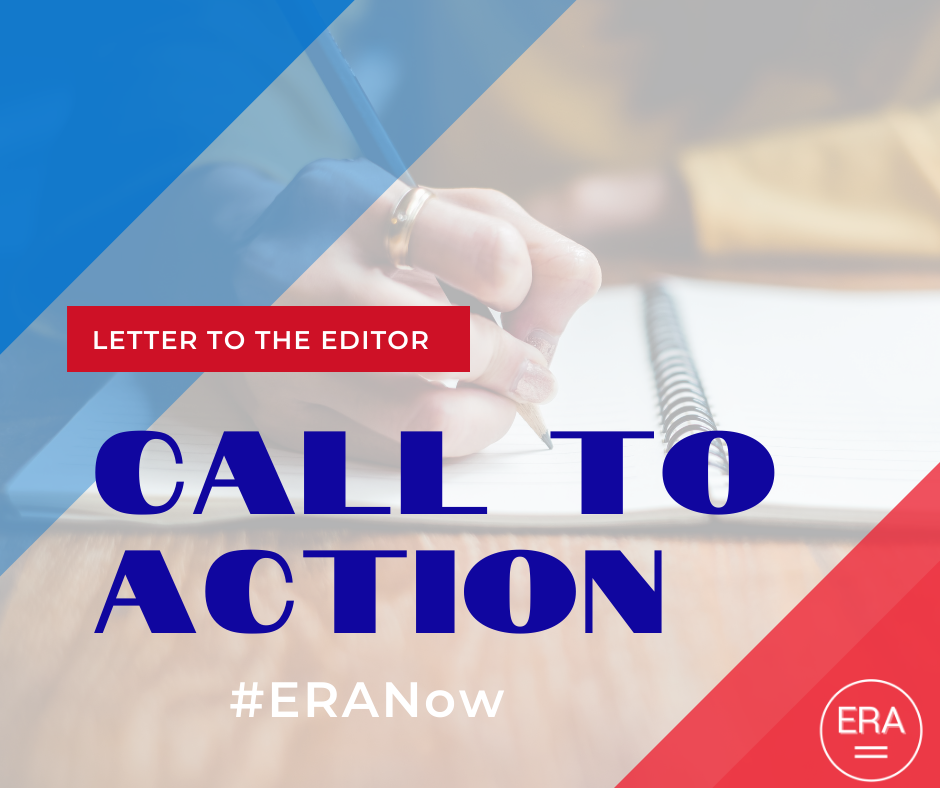 Send a letter to the editor/opinion editorial to newspapers in the United States.   We are trying to get letters published in every US state by March 8 - International Women's Day.   If your letter is published, please send a link to it to [email protected]   Copies of all letters will be delivered to your U.S. Senators on March 8.

However, if you missed the date, please still try to get one published!

This is a campaign to solicit local awareness and support for adding the ERA to the US Constitution now that the need 38 states have ratified it.   The goal is to get people to contact their Senators to show their support.    We have another Letter to the Editor campaign for the 12 remaining states that have not yet ratified it.   Click here for details on that.

If you are voter in one of these states or a former resident, consider writing a Letter to the Editor of your local newspaper.   You should call upon citizens to support the ERA and call upon your U.S. Senators to support the current bill in the Senate to add the ERA to the Constitution.

Here are some potential talking points:

Note that you should try to keep your comments as non-partisan as possible.

“Equality of rights under the law shall not be denied or abridged
by the United States or by any state on account of sex.”

It’s as simple as that. We cannot expect a document signed without women, two centuries ago, to speak to the challenges modern women face. Between economic participation, access to education, health/survival services and political representation, we are failing - ranking 53rd for gender equality, globally.

We cannot continue to laud America for its many freedoms if those freedoms do not apply equally to the female half of the population. My current residence in ________, ensures equitable rights regardless of gender in its constitution. As a woman (father, son, etc.), it troubles me that my/her rights and freedoms are more recognized and observed abroad than in my/her own country. Returning home to a country without guaranteed equal rights for women is essentially a step backward.

Today, I ask that you join me in calling on our US Senators [add in the 2 names] to vote to immediately add the ERA as the 28th Amendment of our U.S. Constitution. They will be supporting women and their families on both sides of the political aisle. With the 28th Amendment, we can assure women the same security long afforded to men by our Constitution, bringing our country one step closer to liberty and justice for all.

On January 27, 2020 the Equal Rights Amendment was fully-ratified and went from having a name to having a number: 28. Although the 2020 Department of Justice temporarily blocked the National Archivist from certifying the 28th Amendment, one administration cannot halt America’s progress toward equality forever.

Until now, gender equality has existed as piecemeal law. Americans have not been adequately protected from discrimination by patchwork laws, a court case here, a law, a regulation there.

Piecemeal law is insufficient. What Americans have needed all along is foundational law. With the 28th Amendment (Equal Rights) we can fix the gender equality gap in our Constitution, bringing our country one step closer to liberty and justice for all.

The 28th Amendment reads:
“Equality of rights under the law
shall not be denied or abridged
by the United States or by any
state on account of sex.”

Like bricks, simple, straight-forward amendments firm up our foundation. 97% of Americans favor Equal Rights, 78% of us support recognizing the 28th Amendment. Now that we have a new equality leadership in the U.S. Senate please join me in writing to our Senators and encouraging them to recognize the 28th Amendment in our Constitution.

Former <your state> resident now living in <your country>

Why is now the Time?
It has been one year since the House of Representatives passed a bill removing the deadline on ratification of the Equal Rights Amendment (ERA), and yet there is still no equality for women in the Constitution.  With the myriad of issues taking place in the United States today, including a global pandemic and record unemployment, women should be at the forefront of these conversations because they are often disproportionately affected, and yet they are not. It’s only due to the unflagging efforts of my [senator/representative] that women are again coming to the fore on some of these issues in 2021 by [re]introducing a bill to remove the deadline.
Why the ERA?
The ERA would be a powerful new tool to fight systemic inequality and address issues such as gender-based violence, pregnancy discrimination, pay inequity and so much more. [Pennsylvanians/Marylanders/etc] have always known this – in fact, our state ratified the Equal Rights Amendment in [date].
Where we are now
In January 2020, Virginia voted to become the 38th state to ratify the ERA. With that ratification, the ERA has now satisfied all the requirements set forth in the Constitution. The Department of Justice under the Trump Administration has taken the position that the ERA isnot valid today because of a seven-year time limit that Congress inserted in the joint resolution when it proposed the ERA back in 1972. That position is now the subject of federal litigation. In the meantime,  Congress could resolve the question by voting to change the joint resolution, removing the time limit.
What we want [My Rep/Senator is _____________.] With bipartisan support and continued leadership from [my Rep/Senator] though, the House and Senate could both take action in this session, finally bringing the ERA to the floor for a vote, and bringing real equality to the United States of America. I’m grateful to my [Rep/Senator’s] commitment to the full equality of women and girls. Thank you, [Rep/Senator Name].
This is the time. 2021 is the Year of the ERA.