Join us for some food and conversation at our monthly meeting. All levels of experience are welcome! 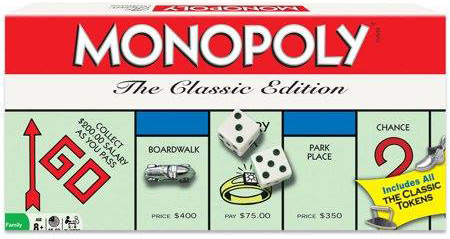 Tackles The Biggest Economic Problem You’re Hearing (Almost) Nothing About

Monopolies used to be a central concern of voters; now it’s called “antitrust” and is left to experts. What do monopolies do? Why are they bad? Do they affect you? Yes, if you travel by air, buy cat food, chat on social media, consume journalism, make health insurance co-payments, buy sunglasses, watch porn, or have an Amazon habit that your partner keeps on about. Is this unique to the U.S.? Pretty much. Join the Solidarity Sundays Monopoly Crash Courseand learn how the federal government went from protecting citizen welfare to consumer welfare, why this makes Americans miserable, and what remedies we have.

WHEN: February 24 4-6pm
WHERE: Amerlinghaus, Stiftgasse 8 1070 Vienna
GOOGLE MAP & DIRECTIONS
RSVP: on the website or on Facebook

The Global Black Caucus of Democrats Abroad Austria would like to invite you to come celebrate Black History Month by participating in our first Open Mic Night. Everyone is welcome to contribute their African or African American inspired acoustic performances, comedy, poetry, or spoken word. Interested performers can sign up in advance for a 5-10 minute slot by contacting Faith Herbold at [email protected]or come and sign up at the event. Make sure to bring a small donation to support the Equal Justice Initiative, an American non-profit organization committed to exonerating the falsely accused and reforming the criminal justice system.

Ladies and gentlemen alike, save the date to join us for an afternoon focused on women's rights - with information and action - in Graz. We'll be viewing a fascinating documentary on the Equal Rights Amendment in the U.S., discussing and writing postcards to legislators.

Stay tuned for more details or contact Caitlinto get involved! 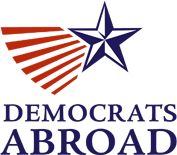 Join fellow DA Austria members on Saturday, March 30 to recap 2018 and elect members to the 2019-2021 Executive Committee.We'll present brief reports on 2018, discuss plans for 2019 and 2020, conduct a vote on amendments to the DAA Bylaws, and hold elections.

Stay for a wine-tasting –

After the business part of the meeting, fellow DAA member Nancy Lee Akinci Seymann will share with us a few wines from her family’s vineyard, Seymanns Weinhandwerkerei.Afterwards, we’ll be moving on to Le Burger for a no-host dinner.

We hope you’ll join us! Please RSVP for the meeting hereand for the dinner on the RSVP button below. All members of Democrats Abroad Austria are welcome. Any American over 18 (by the next federal election) and residing in Austria may also join the meeting.

Help us start the meeting on time –

Please contact Caitlin Ahern to pre-register for the meeting by email.

Include your name, address, phone number and voting state in your email so that your record stays current and ensure that we have an accurate vote count. We encourage all members to pre-register, even if you're uncertain that you can make it, in order to minimize long waiting lines.

And if you’ll join us for dinner –

We’ll make a group reservation for dinner after the meeting at 6:30pm at Le Burger (a five-minute walk from the meeting location). If you'd like to be included in the reservation, please RSVP on this site by Saturday, March 23!!

The 2019-2021 Executive Committee will be elected at this year's Annual General Meeting on March 30, 2019. Here's what you need to know to run for a position.

At the Democrats Abroad Austria 2019 Annual General Meeting in Vienna on March 30th elections will be conducted to fill the following positions for two-year terms:

If you would like to run for any of these positions or you would like to nominate someone for office, please send your name or the nominee’s name and a short bio directly to the Nominations Election Committee (NEC) at  [email protected].

Each nomination must be seconded, also via email to the NEC.

Please note, nominations and seconds must be received by March 13.

The 2019-2021 Executive Committee will be elected at this year's Annual General Meeting on March 30, 2019. Here's what you need to know to cast your ballot in the election.

March 30 Elections are held at the Annual General Meeting

All ballots, including electronic ballots, will be counted and results announced by NEC

This year DAA will accept electronic votes. All members will receive a ballot via mail on March 17. If you would like to vote electronically, please fill out your ballot and return it to [email protected]no later than 23:59 on March 29.

Below are the Rules Governing the Election for 2019 as excerpted from the DAA Bylaws. 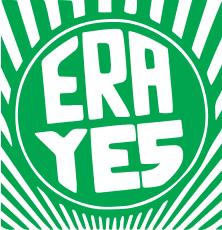 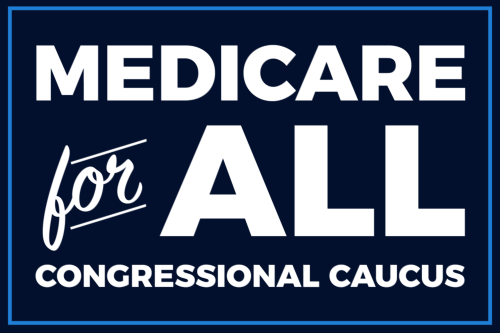 The Democratic Party endorses Universal Health Care.  Among those who have striven to achieve this goal are Senator Bernard Sanders and the 16 cosponsors of S.1804-Medicare for All Act of 2017, as well as former Representative John Conyers and the 124 cosponsors of H.R.676-Expanded and Improved Medicare for All Act.  This past summer Representatives Pramila Jayapal, Keith Ellison, and Debbie Dingell also initiated the Medicare for All Congressional Caucus, which now boasts 70 members.  The Progressive Caucus of Democrats Abroad(ProDA), too, is supporting Medicare4Allwith a variety of initiativesto strengthen the mass mobilization for H.R.676 in February.

The Discussion about how best to proceed certainly will continue in the coming months, especially in the context of selecting the next Democratic presidential candidate. We recommend following and participating in the discussion. Stay tuned!

The VMF Caucus is up and running and we’re looking for members to join our Steering Committee. Contact usif you’re a veteran or a family member of a veteran and interested in joining us!

There is a lot to do before 2020 and we need volunteers to help us gear up for the biggest Get Out the Vote effort ever. Regardless if you can spare a few hours a week or an hour a month, we have something you could help out on. Ready and willing? Contact Jennifer at [email protected]for a full description of the positions. 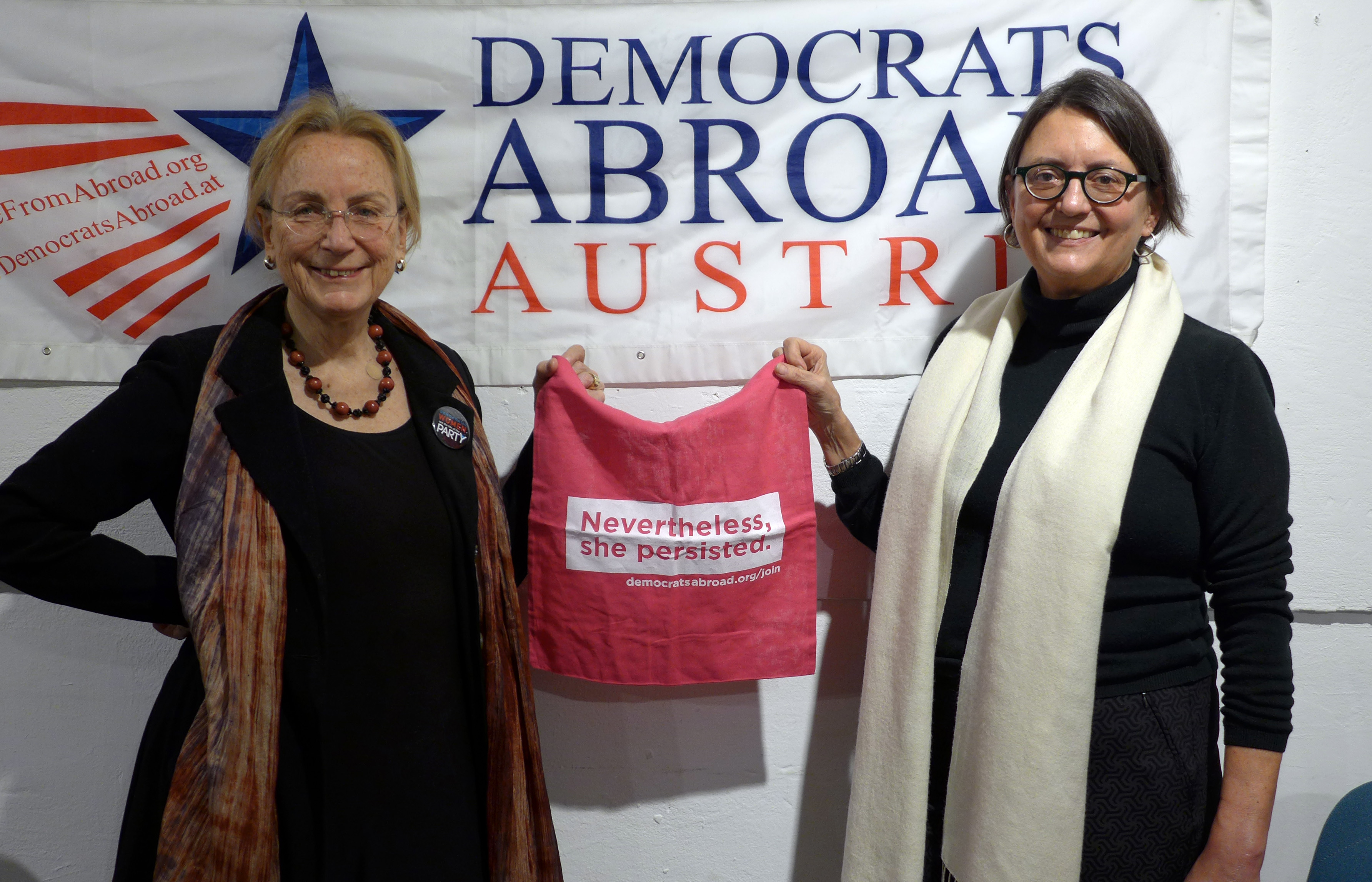 Women’s March Looks at the ERA

The Women's Wave workshop brought a wave of women and men to the Amerlinghaus on the afternoon of the global Women's March.

After a rousing and competitive trivia round, everyone settled in and watched the documentary film "Equal Means Equal," which detailed the history of women fighting for equal rights and protection under the law through the ratification of the Equal Rights Amendment (ERA). Thirteen states have not ratified the ERA, which was introduced by Alice Paul in 1923. 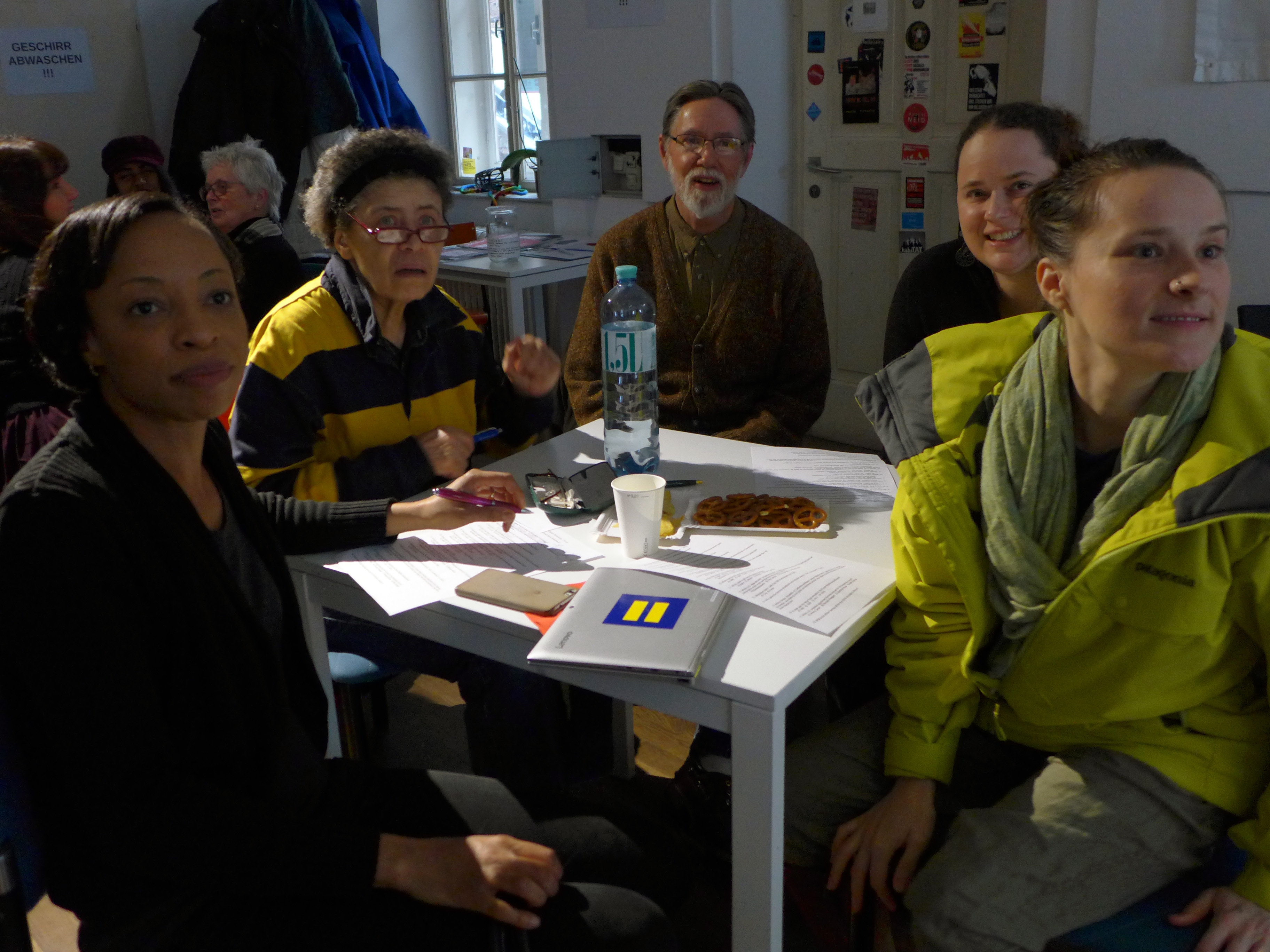 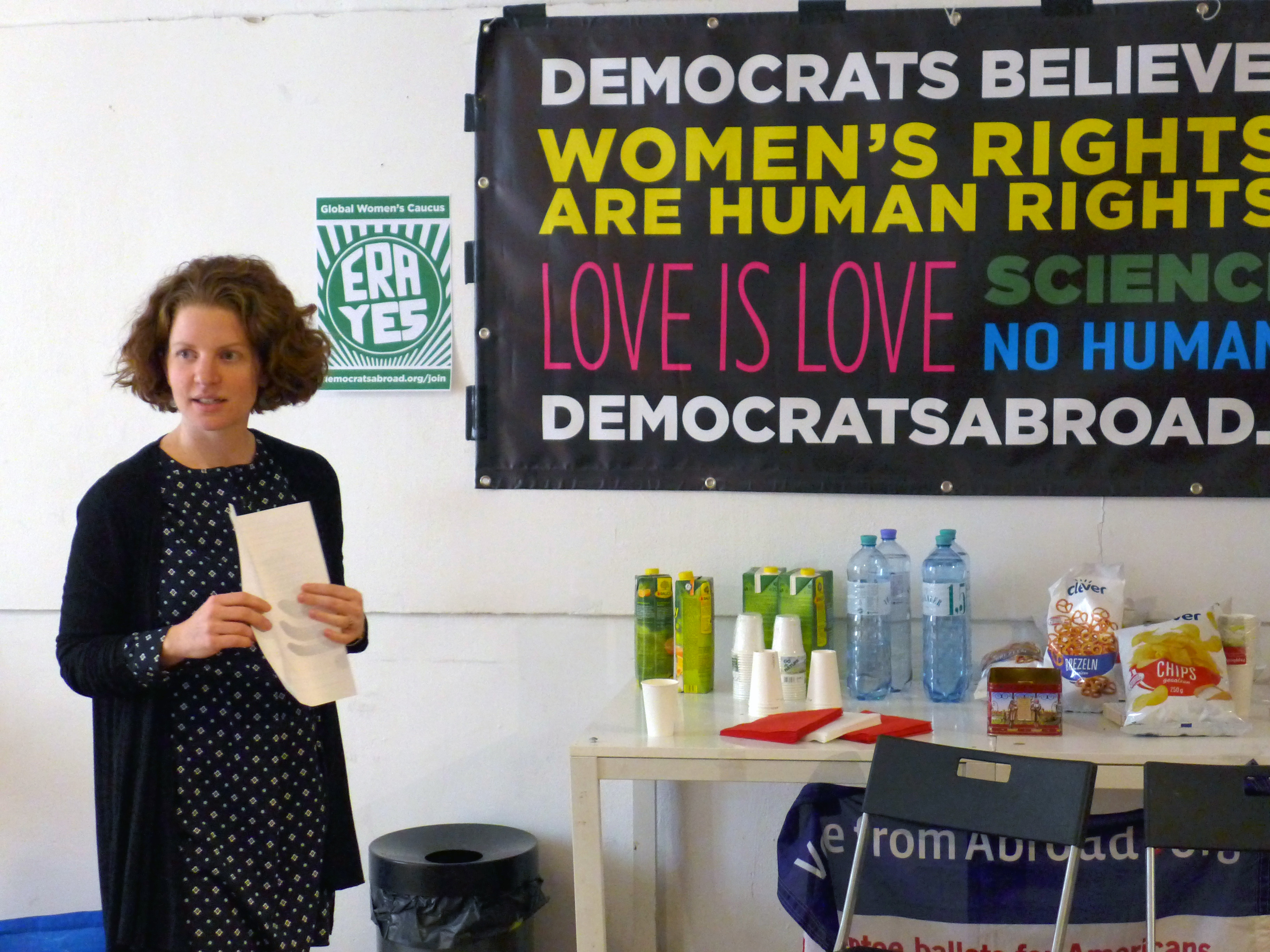 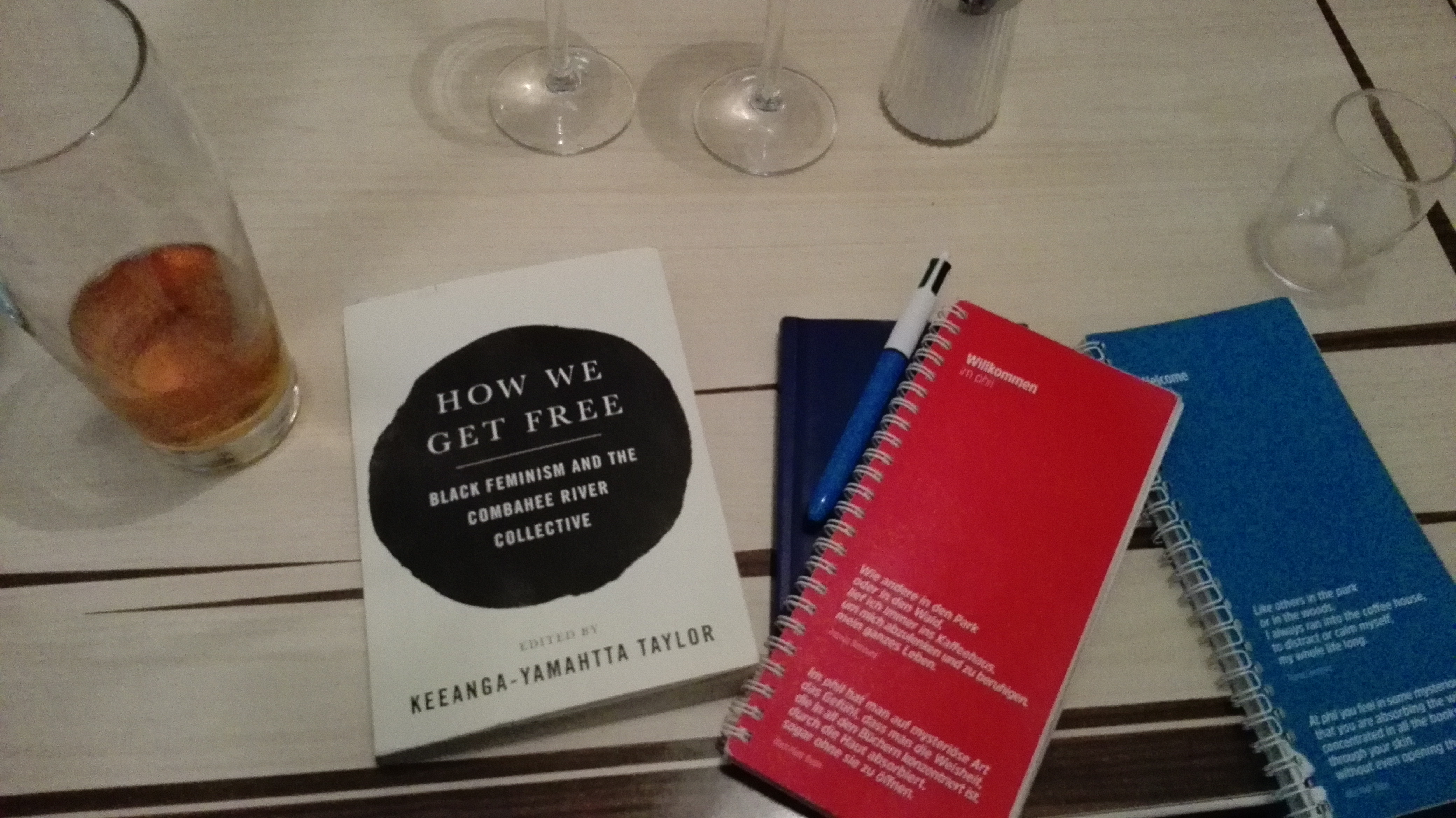 The members of the Global Black Caucus gathered at Café Phil for their monthly meet-up, this time with a smaller, more intimate group. The book How We Get Free: Black Feminism and the Combahee River Collective,edited by Keeanga-Yamahtta Taylor, was a compilation of a series of interviews by the founding members of the Collective and contemporary black activists. There was something in this book for everyone - whether they were a newcomer to feminism or had been a part of the feminist movement for quite some time. Even within this small group, everyone had different views on feminism and the influence that the Combahee River Collective had on black, radical and mainstream feminist movements present today. One thing is certain: if we are going to move forward, we need everyone – in places of power and privilege, in the margins, and from all walks of life – at the table. 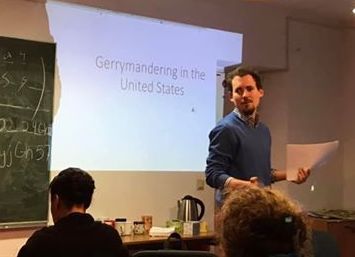 Plus Democrats’ Number One Priority This Congressional Session

Attendees took turns learning about civic issues to share with, and empower, fellow Americans. On January 27th, Solidarity Sundays member David Heckenberg took us through the history of congressional redistricting. We learned where it got the name “Gerrymandering”, and how phrases that sound like a rap song -- cracking, packing, andkidnapping-- are widespread tactics for stealing elections. He explained how the citizenship question for the 2020 census could impact redistricting, and which organizations are fighting the administration about its inclusion in the census.

Tanya Lolonis took us through House Resolution 1-- the 571-page Magnum Opus legislation introduced to begin the new Democratic Congress. Top priorities are introduced first -- hence its number, ”1” -- and the Resolution has three aims: ending the dominance of money in politics, putting teeth back into ethics laws, and making it easier to vote. Without GOP support in the Senate, it is unlikely to become law, but is important for two reasons: first, HR 1 broadcasts that the new majority will emphasize voting rights in this Congressional session. Second, it lays the foundation to restore the Voting Rights Act, the gutting of which by the Supreme Court in 2013 initiated our current era of voter suppression.