Thousands of Americans abroad have already requested, received and returned their ballots. These ballots will be counted, if they arrive in time.* Don't miss out! Know your deadlines and exercise your right to vote this year.

DNC Statement on Shooting in Pittsburgh

DNC Chair Tom Perez issued the following statement in the aftermath of a mass shooting at the Tree of Life synagogue in Pittsburgh, Pennsylvania:

“Our hearts go out to the Jewish community in Pittsburgh, the first responders who put themselves in harm’s way to save lives, and all those affected by this senseless act of gun violence. No American should be afraid to worship. No community should be shattered by such bigotry. As a nation, we must elect leaders who will fight for common-sense gun laws. And we must speak out against anti-Semitism and all those who enable it.”

LGBT* Rights Must Be Protected

Democrats Abroad strongly opposes the Trump administration's efforts to marginalize LGBTI Americans and to define transgender and intersex citizens "out of existence."

Candidate for Congress, Lauren Baer, was once a Democrat living abroad. Now she's fighting to flip Florida's 18th Congressional District. Here's why she wants to make sure you vote this year, no matter where you are:

Americans abroad who still have close ties back to the US often grapple with the distance from “home” — both geographically and by time zones. Just ask Julia Bryan, International Chair of Democrats Abroad.

Celebrate Democrats Abroad Day with us!

We began our last day in Chicago with one item on our schedule - the official DNC summer business meeting.

The meeting started at 8 with breakfast. DNC members and guests then proceeded to find seats in the conference hall, say goodbye to our colleagues and wrap up business. Since DNC teams sit by state at these meetings, our team made great use of the time and were able to track down the states we hadn't yet spoken to.

It was clear what the focus of the day would be  - discussing and voting on the reform package. After a three hour debate on Friday, the majority of members were ready to call the  question and vote. Once Chairman Tom Perez called the meeting to order, and we reached the moment to discuss and vote on the URC reform package, only a few people came up to speak for and against the one issue that was still under debate - how to handle super delegate votes during the presidential convention.

Because the group against delegate reform was still not ready to concede, they asked Tom Perez to call a vote on whether or not we could proceed without a charter change in order to allow the reform to go through. We voted by paper ballot, and the yes (no need to change the charter) vote won by 329.5 votes, with the no vote coming in at 106.5. We then began to vote on another procedural issue (whether or not to split the delegate reform from the rest of the package). We were into the afternoon now, and members were leaving for airports and proxying their votes, when Don Fowler, former DNC chair and a leader of the opposition movement, rose to the occasion. He asked that we vote in favor of the reform through an acclamation vote, and called for unity within the party.

Because we were in the middle of the second procedural vote, DNC Parliamentarian Helen McFadden had a bit to do to untangle us from that process, but as soon as she had sorted everything out, and a few more people had spoken and made sure their votes were on record, DNC members showed their support for moving forward with the reform with a standing acclamation vote that was greeted with waves of applause and cheers.

The Reverend Jesse Jackson then came on stage and gave a moving invocation, asking for unity and reminding us that our strength lay neither to the left nor to the right but in the moral center. His words were met with another standing ovation. Chairman Perez then wrapped up all remaining business and we proceeded home, proud to have been participants in a historic moment within the Democratic party and ready to work hard in the few months left till the election.

After a productive day of meetings for state chairs and vice chairs, Thursday and Friday sessions consisted of DNC committee, caucus and council meetings.

Democrats Abroad DNC members met for an early morning breakfast before Thursday sessions commenced (sometimes jet-lag can work in your favor. We were the first ones at registration!), and then spread out to attend as many meetings as possible.

Democrats Abroad are in Chicago this week to join leaders and representatives from across the Democratic Party at the 2018 Summer DNC meetings. 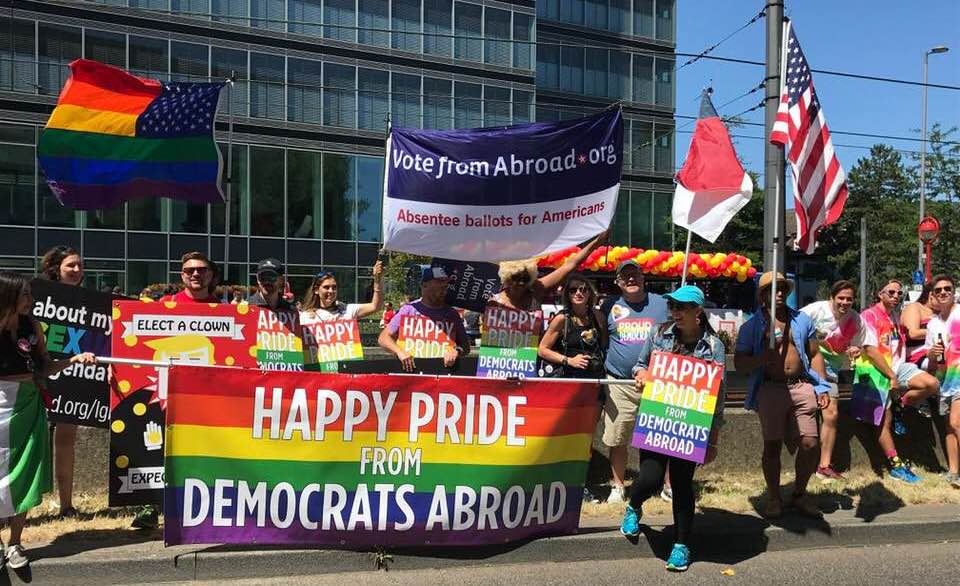