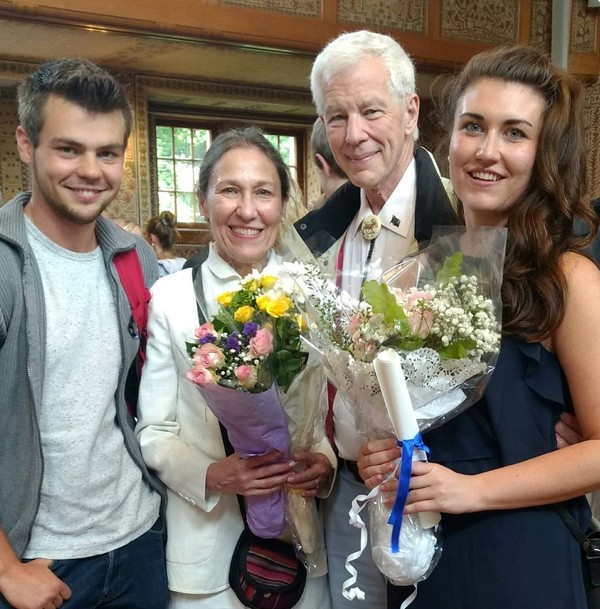 I would be bankrupt and dead three times over without Sweden's universal healthcare system. As long as we've lived here I've been grateful for knowing that everyone is covered, everyone has health insurance. We're a community, we help each other. Then I had reason to need that help myself.

1. In 2010 I had HPV-induced tongue-base cancer which had spread to a lymph gland. I received six weeks of daily radiation plus weekly chemotherapy, followed by brachytherapy (radium inserted directly into where the primary tumor had been). I got a radiation burn which got infected and I was in the hospital for a week, plus another week with the brachytherapy and complications. I was on a feeding tube for three months because of extreme pain in my mouth and tongue. The cancer has shown no sign of recurring. I was charged $10/day while in the hospital to cover my food. I got heavily-subsidized food pouches for the feeding tube. I paid about $125 for all medical visits during the year, and about $225 for all prescriptions. I've had excellent follow-up care at the dental-surgery clinic because the radiation damaged the circulation in my jaw. A wisdom tooth became loose and was just removed after 4 weeks of hyperbaric (high-pressure) treatments breathing pure oxygen for two hours each day -- plus another two weeks after the tooth removal.

2. In 2013 I had bladder cancer. One polyp was "shaved" away and three smaller ones were cauterized. Later I had six weeks of BCG (weakened TB virus) treatments twice, and still later six weeks of chemo treatments directly in my bladder. There have been 6-month follows throughout this period. Costs are similar to those above (except that I haven't been in the hospital -- and the tests and procedures weren't as high-tech -- so okay, I might not have been bankrupt that time).

3. In 2016 I had heart failure -- my heart was beating irregularly and at three-times it's normal rate -- and could hardly breathe. I was in the hospital for two weeks during which there were all kinds of high-tech (and expensive) tests conducted (angiogram, MRI, ultrasound), culminating in atrial ablation (a tube was inserted into an vein in my groin, then threaded through to my heart where small patches were burned out (scarred) to prevent electrical signals from firing irregularly. Since then I've been on four daily medications, at least one of which is quite expensive. All this with costs as above.

I feel totally healthy. I'm 70 and slowing down, sure. But I'm not dead. I saw my daughter graduate medical school last June and start her first job as a doctor, and have also seen my son (who is younger) get his first job and thrive. My wife seems to like keeping me around too. (She was also a major help, of course, in getting me through each of these episodes, especially the oral cancer and heart failure.)

Thank you to Swedish universal healthcare!