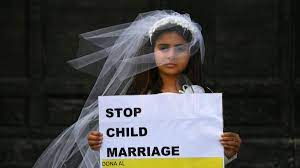 Urgent legislative change is needed in the U.S. to ban child marriage

If you were to mention that child marriage occurs in the U.S., the likely reaction might be disbelief and a vehement retort that this cannot be happening in the U.S.. Unfortunately, this is far from true: a 2021 report by Unchained At Last, a survivor-led not for profit organization, states that nearly 300,000 children, some as young as 10, were married in the U.S. between 2000 and 2018. Appallingly, only 6 states (Delaware, Minnesota, New Jersey, New York, Pennsylvania, and Rhode Island) have laws on the books that prohibit marriage of persons under 18, with no exceptions. The results of a survey conducted in the U.S. in 2020 reflected a misconception that most child marriages occur at a very young age (below 15) and in Muslim-majority regions of the Middle East and North Africa. This misconception could reflect wider stereotypes about Islam and the position of women within Muslim culture.  Most participants in the survey also incorrectly believed that child marriage is illegal throughout the U.S. The results of the survey suggest that public understanding in the U.S. of child marriage is poor, but more importantly, shaped by wider misperceptions of both high and low-income nations. State legislators should understand that child marriage is a human rights violation that legitimizes abuse and denies girls’ autonomy.  It is devastating wherever it takes place, whether in Niger, Afghanistan, California or Florida.

Data from UNICEF (which does not, however, include data from the U.S.) does show that the practice of child marriage has continued to decline around the world.  During the past decade, the proportion of young women who were married as children decreased by 15 per cent, from 1 in 4 (25%) to approximately 1 in 5 (21%). Still, approximately 650 million girls and women alive today were married before their 18th birthday. While the global reduction in child marriage is good news, no region is on track to meet the United Nations Sustainable Development Goal target of eliminating child marriage (meaning before the age of 18) by 2030.  Clearly, it is also past time to end child marriage right here in the U.S.  The U.S. must urgently take action to align with international standards and better and more rapidly strive to achieve the United Nations Sustainable Development Goal.

UNICEF issued a technical note in 2020 for its global programme to end child marriage.  The technical note explains, in particular, the reasons why it is important to have 18 years as the minimum legal age of consent to marriage, including to (i) safeguard boys and girls from being married when they are not physically, mentally, psychologically or emotionally ready to reach their fullest potential, (ii) avoid multiple harms particularly for girls who are denied their rights to health, education and development, (iii) avoid increased risk of complications, due to physical immaturity, during pregnancy and childbirth that can also lead to maternal mortality, and (iv) avoid intergenerational harm, because a young mother whose own development is stifled will be less able to ensure the full development of her children.

As noted above, the situation in the U.S. is dismal, as only 6 states have laws on the books that prohibit marriage of persons under 18, with no exceptions.   Thus, legislative action at the state level in the remaining 44 states is urgently required to move towards prohibition of marriage of persons under 18 with no exceptions.  A number of bills are pending, and all efforts should be made to move these forward.   For a more detailed discussion of the laws in effect at the state level, see the report issued by the Tahirih Justice Center in 2020.

There is also a role for federal leadership in ending child marriage.  Current federal law allows and might even be said to encourage child marriage. For example, immigration law does not specify a minimum age to petition for a foreign spouse or fiancé(e) or to be the beneficiary of a spousal or fiancé(e) visa, which allows for American girls to be trafficked for their citizenship and allows for children around the world to be trafficked to the U.S. under the guise of marriage. The 2021 report from Unchained at Last states that nearly 9,000 petitions involving a minor were approved in the U.S. between 2007 and 2017, and in 95% of them, the younger party was a girl.

Another example where federal law should be changed is the so-called statutory rape provision in the federal criminal code (18 U.S.C. § 2243(c)(2)), which although it prohibits sex with a child age 12 to 15, specifically exempts those who first marry the child. This, of course, implicitly incentivizes child marriage and endorses child rape. Thus, this child marital exception for statutory rape should urgently be repealed; it would be a step towards aligning U.S. laws with international standards and discouraging child marriage and rape in the U.S.

Unfortunately, at the present time, there appears to be no movement at the federal level on these issues. There is one bill which was introduced in the House of Representatives a year ago on March 8, 2021 that requires the Department of Health and Human Services to study and report on state laws regarding the minimum marriage age and the prevalence of marriage involving a child who is under the minimum marriage age.  The bill has been referred to the House Committee on Education and Labor.  In any event, even if this bill were approved, this does not portend any momentous action that might accelerate legislative change to prohibit child marriage.

In conclusion, there appears to be a general lack of visibility on the issue of child marriage in the U.S., and up until quite recently a lack of reliable data.  As a result, the necessary legislative action at the state level is too slow to progress.  Organizations such as Unchained at Last and Tahirih Justice Initiative play an important role on both fronts by working to increase visibility and gathering data.  All of us should be aware of,  and communicate our urgent concern in the broadest possible manner in our communities as well as to our elected representatives about the violence against women inflicted by child marriage.