The Equal Rights Amendment has been ratified by Viriginia making it the  38th State necessary to ratify the ERA thereby making it the 28th Amendment to our Constitution.

However, the United States Archivist has refused to register the Amendment, stating that he will only do so upon a court order to do so.

There are currently two active lawsuits to force him to register the ERA: one in Massachusetts and one in DC.

The Massachusetts case is further along in the procedure: On June  26,2020 , the  Judge  heard the two sides (the Government and the Plainfiffs including Equal Means Equal) explain in oral argument their legal arguments. The summary below explains what happened during the court hearing. The decision will be rendered by the Judge in 1-2 months and we will keep you informed.

Below is a very brief summary of the oral argument of the EQUAL MEANS EQUAL, THE YELLOW ROSES case. Each side had 30 minutes of argument including the time necessary to respond to the questions by the Judge. The judge read all of the pleadings and asked questions of both sides. 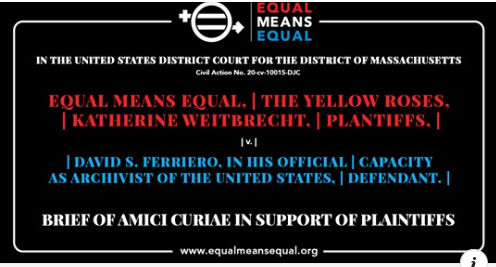 On June 26, 2020, the District Court  of Massachusetts heard oral argument in the case of Equal Means Equal, the Yellow Roses, Katherine Weitbrecht, Plaintiffs v David S Ferriero, Archivist of the United States Government, Defendant. You could register to call in and from what I understood, there were about 20 people listening in but they were not identified.

The hearing focused on the motion to dismiss the case due to lack of standing of the Plaintiffs filed by the US Government. Both sides closely followed their respective briefs.

Counsel for the Defendant argued that none of the Plaintiffs have standing to sue because they do not allege actual (or prove) damages. In the case of EME and Yellow Roses, it does not show that any of its members have been harmed by the actions of the defendant, which defendant’s counsel stated is necessary to justify standing to sue. In the case of the individual, the same argument was made: that she did not show any real damage but only hypothetical future harm. Defendant quoted a number of Supreme court decisions which are cited in the Government’s brief in support of its motion to dismiss.

The judge asked counsel whether, in using the burden of proof she is arguing should apply, whether any association could show standing. She responded in the affirmative quoting a number of Supreme court cases and differentiating them from the case at hand.

There was some argument concerning the delay for ratification having expired but most of Defendant’s argument was based on the lack of standing of the Plaintiffs to sue.

Plaintiffs’ counsel (Wendy Murphy) argued that there was ample case law to support the standing of the Plaintiffs and that in fact, all women have standing to sue because as a class they have been and continue to be harmed by the Defendant’s refusal to register the 28th amendment. Plaintiff’s counsel also argued that not only does the Defendant have no power to refuse to register the 28th amendment but his opinion, even if one were to take it into consideration, is wrong. In , the argument is that a) he has no power to refuse, and b) his legal opinion that the Amendment is not timely is wrong and c)  he already stated in a public letter that he would register the Amendment when the 38th State ratifies it, and d) he subsequently expressly submitted to the authority of the courts when he stated in writing that he would register the Amendment if ordered to do so by the courts.

The Judge was very engaged during the entire hearing and indicated that she was going to read all of the case law upon which both Defendant and Plaintiffs rely in their respective briefs.