State laws are taking away our freedom of choice and Roe vs. Wade is fragile. Our team fights to maintain and further our reproductive rights and freedoms.

Welcome to our Reproductive Justice Blog space. This is the place to learn more about this important topic and actions we can all take in the continuing battle to promote access to quality reproductive health care services, including safe and legal abortion for all women.

Here are some sites which will help:

For searching:  Plan C Guide https://www.plancpills.org/ – Select your state from the list, press Search, and then the results show you a number of online providers along with details such as price, delivery time, etc.

Some specific online providers include:

Pro-choice Victories in the November 2022 Elections

Ballot measures There were wins for reproductive freedom in five states:

Kentucky – Amendment 2: Would add to the Kentucky Constitution: “To protect human life, nothing in this Constitution shall be construed to secure or protect a right to abortion or require the funding of abortion.”

Vermont – Proposal 5: Would add to the Vermont Constitution: “That an individual’s right to personal reproductive autonomy is central to the liberty and dignity to determine one’s own life course and shall not be denied or infringed unless justified by a compelling State interest achieved by the least restrictive means.”

Governor seats that flipped from Republican to Democrat

Moore’s stance on repro rights: “Wes recognizes that all Marylanders deserve the autonomy to make their own decisions about their reproductive healthcare. Wes and Aruna will fight to make access to reproductive care more affordable and accessible in every corner of our state…” (source)

Healey’s stance on repro rights: “With our reproductive rights under attack like never before, Maura will ensure patients and providers are protected here in Massachusetts…” (source)

Senate seat that flipped from Republican to Democrat

Fetterman’s stance on repro rights: “A woman’s right to make her own health care decisions is sacred and non-negotiable. Period.” (source)

Some House seats that flipped from Republican to Democrat

Scholten’s stance on repro rights: “Protecting reproductive health care choices is fundamentally a matter of privacy and freedom from government control. It is a kitchen table issue, a worker’s rights issue, a child welfare issue, and a healthcare worker protection issue.” (source)

Vasquez’s stance on repro rights: “Access to healthcare is a right and politicians in Congress and in state Legislatures shouldn’t stand between women and their healthcare. Gabe will oppose any attempt by Republicans in Congress to ban access to abortion, birth control, or to prevent women from having the right to choose.” (source)

Nickel’s stance on repro rights: “I believe that politicians have no business getting in the middle of healthcare decisions, and that those decisions belong between a woman and her doctor. That’s why I helped lead the fight in North Carolina to stop Republican attacks on the right to choose, and why I’ll fight hard to protect that right in Congress.” (source)

Landsman’s stance on repro rights: “Greg will oppose any efforts to undermine the privacy between a woman and her doctor, and he supports the codification of the rights afforded by Roe v. Wade on the federal level.” (source)

Whitmer’s stance on repro rights: “Gov. Whitmer is a champion for a woman’s right to choose, because she knows that the decision to start a family shouldn’t be made by a politician. She has taken proactive steps to protect the right to choose in Michigan and ensure Michigan’s 1931 abortion ban never goes back into effect.” (source)

Evers’s stance on repro rights: “…Gov. Evers will continue to take any action necessary to protect access to reproductive services, including abortion and contraceptive services.” (source)

If you would like an update of the situation in each State, see the Article in Ms Magazine which was last updated on July 7th

Hang in there sisters… it is going to be a long fight but we will get our rights back.

The digital surveillance threats to women’s reproductive health information are likely to escalate dramatically if the Supreme Court repeals abortion rights in the coming days and states criminalize abortion. In response, U.S. Senators Mazie K. Hirono (D-Hawaii), Ron Wyden (D-Ore.) and Representative Sara Jacobs (D-Calif.) introduced the My Body, My Data Act—a federal law protecting personal reproductive health data by minimizing the information that companies can collect and retain, for example through period tracking apps. The bill would prevent organizations from disclosing or misusing that information and create a new national standard to protect reproductive health data, enforced by the Federal Trade Commission."

Read the rest of the article here:  https://msmagazine.com/2022/06/23/reproductive-health-my-body-my-data-act/

Know Your Health Rights Says The US Government

Democratic ads on abortion rights have flooded the airwaves in the days after the Supreme Court struck down Roe v. Wade.

Since the Dobbs decision was issued last Friday, $4 million has been spent on abortion ads — a total of 56 unique ads and 8,900 airings, according to AdImpact. The vast majority of spots are from Democrats angered at the decision while Republicans have stayed relatively quiet on the issue.

In competitive Senate, House and gubernatorial races, Democrats and pro-abortion rights groups are leaning into the court’s decision as a way to motivate voters in November. Here’s a sampling of the major pro-abortion rights messaging Americans saw on their television screens this past week.

Emily’s List also ran an ad praising Hassan for “working for a federal law to protect a woman’s right to make her own personal decisions.”

→ Nevada: A spot from Women Vote! PAC highlighted GOP Senate candidate Adam Laxalt’s anti-abortion rights stances. “He’s coming after our freedom. We need to tell him no,” the spot concludes.

→ Nevada’s 3rd District: Incumbent Rep. Susie Lee (D-Nev.) is in one of the tightest reelection campaigns of any House Democrat. Her campaign quickly put out an ad contrasting Lee with GOP opponent April Becker on abortion rights.

“April Becker — threatening every woman’s right to choose. Exactly why we need Susie Lee, endorsed by Planned Parenthood. Lee will protect our right to choose — always,” the ad says.

→ Connecticut: Democratic Gov. Ned Lamont also is out with an ad arguing Connecticut has “the strongest protections for a woman’s right to choose” in the country. 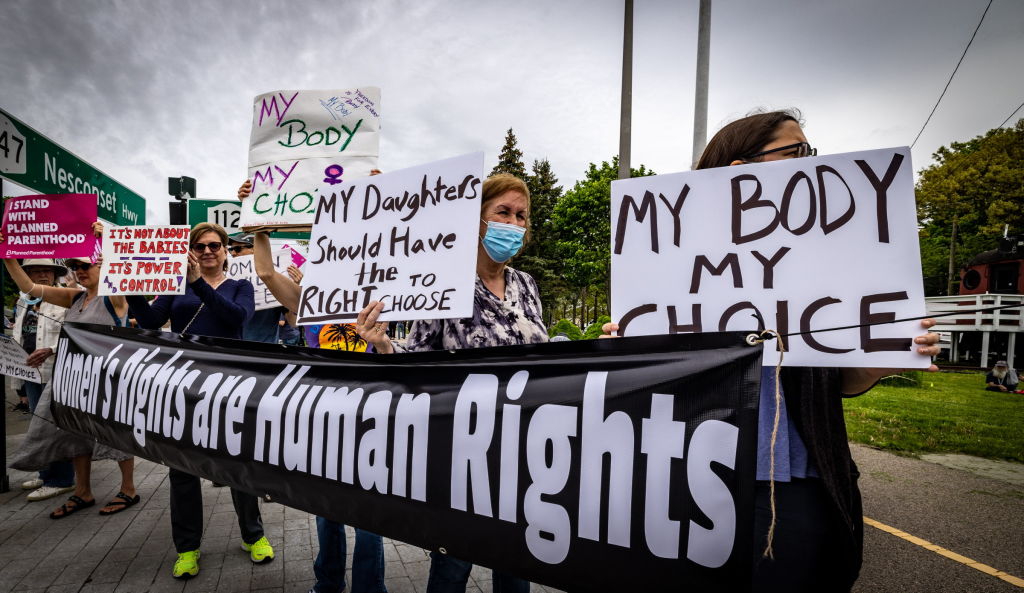 Faced with the likely end of Roe v. Wade, reproductive rights advocates are seeking to create a nationwide sanctuary network for abortion services by passing interlocking legislation in blue states to ensure every American can safely access legal abortion services.

“The Santoro Act is the first step toward creating a nationwide sanctuary network for women in need and the first-ever private-public partnership to build a war chest to ensure reproductive autonomy,” said Lavine when he introduced the bill.

The bill is named after Geraldine Santoro, who died from an unsafe abortion in 1964. A police photograph of her dead body, published in Ms. magazine in 1973, became a symbol of the abortion rights movement in the United States.

The legislation would establish an office within the New York Department of Health that would create a nonprofit corporation to administer the program with a $15 million appropriation. The nonprofit would facilitate travel arrangements, lodging and medical appointments for women who need them, and pay the costs where eligible. The law encourages the nonprofit to enter into pacts with other states that enact similar laws so states can pool their resources, serve the greatest number of patients and use their funds in the most efficient manner. The goal is that patients “can be treated in the least disruptive and most compassionate manner, with the least amount of travel.”

Supporters of the bill hope for passage of replica Santoro acts in state legislatures across the country.

“What we’re talking about is the departments of health in all of these states coming together and forming an umbrella group to run the infrastructure,” said attorney Jim Walden, who drafted the legislation and is a managing partner at Walden, Macht & Haran. “That’s important to make sure that the application process is easy, accessible and well known, and that it happens quickly, especially for those women that are in crisis, so that they can get accurate information and get immediate attention and services.”

The law encourages the nonprofit to enter into pacts with other states that enact similar laws so states can pool their resources, serve the greatest number of patients and use their funds in the most efficient manner.

Walden, who is leading the fundraising efforts directed at private philanthropists for a new abortion access fund, explained how the process would work.

“We need the departments of health from all of the sanctuary states to come together and adopt a common application, available in every language imaginable, on a central website. The steering committee of all of these different states would administer the program and there’d be staff. They would all then have a set of policies, procedures and protocols that were understood and well known within this multistate agency,” said Walden.

The bill provides for a fast-track option in which applicants for financial assistance receive notice of the determination on their application within 48 hours of the application’s receipt.

Walden also says that states would have a “concerted fundraising effort and compacts between the states. They would have contracts with airlines and with national hotels, and individual contracts with abortion providers and other professionals, so that there’s high quality services at the lowest possible cost. All that infrastructure needs to be built,” Walden told Ms.

Another section of the act replicates the Texas bounty hunter law in reverse, creating a right for anyone to bring a civil action against any person who obstructs, impedes or hinders any woman from exercising the right to abortion, any medical professional who provides abortions or abortion-related services to any woman, or anyone who aids or abets any action interfering with access to abortion. Courts can award successful plaintiffs damages in an amount of not less than $50,000 for each abortion the defendant obstructed in violation of the law, as well as attorneys’ fees.

What can Biden do?

WHAT CAN BIDEN DO TO UNDO THE SUPREME COURT DECISION ON ABORTION?

The response is not much unfortunately.

Read this article to find out more:

The Fight Goes On

The Fight Goes on!