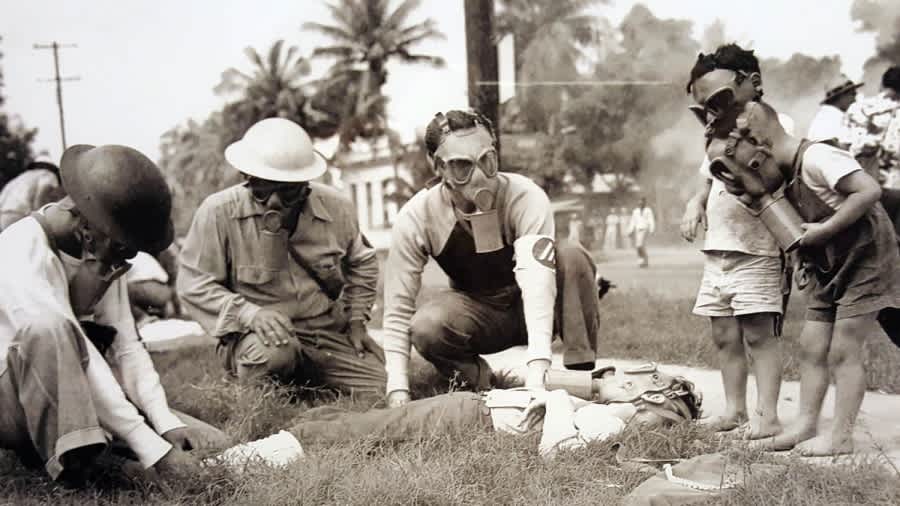 Volunteers practicing a gas drill on Honolulu. Every child over the age of 7 was issued a gas mask after the Pearl Harbor Attack.

By Jim Moss and Tilly Gaillard

December 7th is the anniversary of the surprise bombing of Pearl Harbor, home to the U.S. Pacific Fleet in Hawaii, by the Imperial Japanese Navy. This event triggered the U.S. decision to enter WWII.

The first strike sank the USS Arizona and its crew in 40 feet of water. 1,177 sailors and Marines were killed while 335 escaped.

In the second strike, 10 torpedoes hit the USS Oklahoma. It sank with 400 men aboard.

Suspicion led to the internment of Japanese Americans with as little as 1/16th Japanese blood in detention centers in the U.S. between 1942 and 1945. After the War returning to “normal life” was hard, with no shortage of racism and discrimination.

Deputy Assistant Secretary of State Roy Stacy, former Vice Chair of the DA Brittany Chapter, witnessed the event as a 4-year old and recorded it in his riveting memoirs, A Delinquent’s Detour.

“My earliest remembrance from growing up in Hawaii was when I was 4 years old on December 7, 1941. It was early Sunday morning and my father and I were out washing his pride and joy, a 1936 yellow convertible Packard. Just before 8 am we were surprised to see dozens of fighter aircraft, with bright red zeros, bombs and torpedoes under their fuselages. They dropped over the mountains and began low level attacks on air bases and especially Pearl Harbor.

My father and I ran down to the beach at the end of our lane where we had an unobstructed view of Pearl Harbor just a kilometer away over the water. After digging shallow fox holes we lay there mesmerized by the continuous explosions. My mother emerged from her hiding place under her bed to periodically run to the beach, check on us, and then return to her under-the-bed air raid shelter.

We learned later that 358 Japanese aircraft had been launched from 6 aircraft carriers north east of Honolulu so they could attack with the blinding sun behind the fighters.  A Japanese hallmark.

From nearby Fort DeRussy some anti aircraft guns hit one aircraft which crash landed at the far end of the beach near us. My father ran down and took a ten inch morsel of the plane and gave it to me as a souvenir. It has unfortunately been lost during the many moves my family made over the years.

By Monday all the beaches were closed, covered in multiple strands of barbed wire and a curfew in place.  A Japanese invasion was anticipated as had occurred on Wake Island.  Fortunately, it never came.”