“...quite often the most important voice in the room is not the loudest or most powerful, but the one you have to lean into to hear. I took that lesson to the classroom, raising my children, and serving my constituents in the state senate and became a better teacher, better parent, and better legislator. Listening to those voices, not the loud and powerful voices in Washington, is how we bring people together on issues like health care, jobs, and education.” 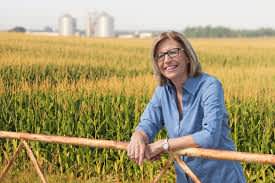 Rita is a native of Charles City, Iowa. She and her eight siblings were raised in a “divided household”- her mom being a Republican, and her dad a Democrat. It was this environment that prepared Rita to work across the aisle when she would later be elected to the Iowa Senate in 2012. She learned not only the importance of having an opinion and backing it up but also of being challenged in her thinking and listening to the other side as well.

Rita graduated from North Iowa Area Community College and the University of Northern Iowa. For twenty years, she taught junior and high school English in the Calamus-Wheatland and Bennett Community School Districts. Rita continued to serve students after she left the classroom; she led several programs that prepared students for careers with local businesses.

Rita became involved in politics upon her election to the Iowa Senate, where she won over the voters of a swing district. When the majority of Iowa swung right in 2014, Rita continued to hold her seat. In 2018, Rita was the Democratic nominee for Iowa’s Lieutenant Governor.

How has your background in education and local government inspired and equipped you to run for Congress?

Hart: “The part of being a state senator and teacher I loved most was listening to my students and constituents and learning their stories. It made me a better teacher and better state senator.”

Rita is continuing to fight for Iowa families, small businesses, and farms. She is dedicated to fully funding K-12 schools and developing job training for Iowan workers. Rita believes we must not spend our time attacking the other side. Rather than adding to the division, Rita preaches that we must talk about what we believe in a constructive way.

What are the key voter concerns in your district, and how do you plan to address them?

Hart: “Health care, economic development, and education. The coronavirus has not changed the issues we need to work on, but it has made them more urgent.

We have to build on the Affordable Care Act by allowing Medicare to negotiate lower drug prices and adding a public option to get people covered. As a rural state, Iowa has some special needs to improve access. We have to provide funding to our struggling rural hospitals and fix the mess the state government has made of Medicaid privatization. Finally, we need to do more to encourage high-need health care professionals like psychologists and OB-GYNs to locate in rural areas.

Rural economic development has been a passion of mine from my time in the State Senate. I helped found the Clinton County Economic Development Coordinating Council and created a framework for small-town mayors to work together to spur economic growth. My congressional office will have one staffer dedicated to focusing on economic development. I am also looking forward to working to raise the minimum wage, improve access to rural broadband, make apprenticeships and job training more accessible, and provide more affordable childcare options for families.

As we continue to respond to coronavirus, we must do more to ensure small businesses, workers, and state and local governments get the relief they need while having diligent oversight over every taxpayer dollar.

Finally, we need to do a lot of thinking about how we approach education. I taught in small, rural schools for 20 years and then worked on school-to-work programs. We need more job training, less standardized testing, debt relief for college students and graduates, and universal pre-K.”

What is your leadership style, and how will you use it to unite our divided polity after the election? Further, what common issues and core beliefs do you believe Iowans and Americans are ready to rally around together?

Hart: “The story I always tell on the campaign trail is about my mother. She had rheumatic fever as a teenager and it damaged all four valves of her heart. As a result, she spoke with just a whisper for a voice. She raised my eight brothers and sisters and I successfully with that whisper because we learned how to listen. Just from her whisper, we could tell if she was pleased, if she was mad, if she was sad. It also taught me that quite often the most important voice in the room is not the loudest or most powerful, but the one you have to lean into to hear. I took that lesson to the classroom, raising my children, and serving my constituents in the state senate and became a better teacher, better parent, and better legislator. Listening to those voices, not the loud and powerful voices in Washington, is how we bring people together on issues like health care, jobs, and education.”

Rita is running for an open seat in IA-2, hoping to replace soon-to-be retired Democrat Dave Loebsack. At the moment, she faces several Republican opponents in this battleground/toss-up election. Iowa’s status as a swing state means its congressional contests are hot, competitive, and ready for the taking by either party. So far, Republicans have failed to consolidate behind a single candidate. Thus, they lack solidarity going into what should be a terrific opportunity to flip a House seat.

Rita’s win would prove Democrats’ ability to reach and maintain rural voters, a crucial community both parties are competing to mobilize. With her 2014 re-election to the Iowa Senate, Rita demonstrated her ability to maintain support while her surrounding political environment fluctuates. Rita has the roots and experience necessary to fight for the interests of her constituents and will provide the traction needed to swing Iowa left.

As a swing state, Iowa is particularly sensitive to the national political environment. Given Iowa’s special position as the first state to vote in the primary election season, its caucus has long been seen as a litmus test for the political leanings of rural voters. Given the current political climate in Iowa and elsewhere, why might traditionally Republican voters be ready to vote for you?

Hart: “In my announcement video last year, Paul and I recorded while filling the planter as we got ready to put in our crop. I said, “This is who I am, and this is what we do.” Paul and I are rural Iowans. We are both farm kids from large families and we bought our farm in 1986. I taught in small rural schools for 20 years and we sent our children there as well. As a State Senator, I was re-elected in the tough year of 2014 because I worked hard for my community on economic development, education, and health care issues.”

What is the current state of your race, and how do you envision your path to victory?

Hart: “We are very proud of the race we are running. Obviously, this is a district Donald Trump won and we know the Republicans view this as a “must-win” seat to retake the majority so we take nothing for granted. With that said, we know Democrats are united and ready to win because we did not have a primary. There were a lot of great potential candidates and they all decided not to run and endorse this campaign. We’re proud to have earned the support of Congressman Dave Loebsack and Congresswomen Abby Finkenauer and Cindy Axne. We’ve been endorsed by several progressive organizations and the Iowa Federation of Labor.

Now we know the work is to make sure voters know me, my story, and the common sense priorities of this campaign. We’re building a coalition of Democrats, Republicans, and independents to win this seat so that no matter what happens elsewhere on the ballot, we are in a position to win.”

Hart: “We hope you’ll join us. You can learn more and sign up to get involved at ritahart.com.”

If you would like to support Rita in her battle to win over Iowa’s 2nd congressional district, please visit: