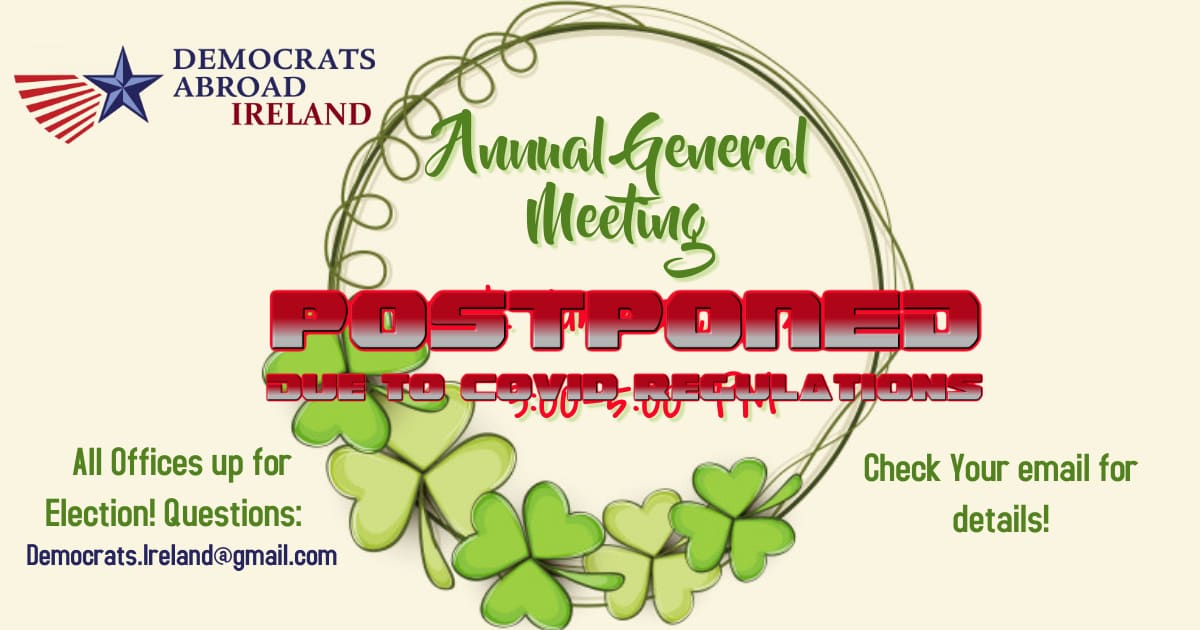 The 2021 Democrats Abroad Ireland Annual General Meeting, which will include elections to the Executive Committee,  has been POSTPONED due to Irish Government Covid regulations on in person gathering. We hope to reschedule for September / October if possible.

Thank you for your patience as we work to stay within Irish government regulations on gathering during the Covid-19 Pandemic.

Where:  Location to be determined, depending on COVID regulations

What:  Elections and Annual General Meeting

All positions (detailed below) are up for election at this AGM.  As per our by-laws, no officer may serve more than two consecutive terms in the same position.  All positions and their current office-holders are listed below with those that are term-limited indicated.

Carija Ihus, TJ Mulloy, and Patti McCann have been appointed as the Nominations and Elections Committee (NEC) for the 2021 elections.

Nominations for an office shall be made in writing by a member and seconded by another member, either in the same or separate writings sent to the NEC, or from the floor of the election meeting. A member may nominate themselves. The NEC may also make nominations directly. Nominations should be forwarded to the NEC by notifying the Committee via email at [email protected] .

A tentative agenda for the AGM is listed here:

For your reference the relevant sections of our by-laws that define the Executive Committee is printed here:

The Chairperson shall be the chief executive officer of the organization, shall call and preside at all meetings of members and of the Executive Committee, and shall have responsibility for all activities approved by the organization. The Chairperson shall sit ex-officio on all committees of the organization, including Standing Committees, with full voting privileges. By January 31st of each year, the Chairperson shall certify to the International Chair of the DPCA that the membership database containing the names (and such other information as the DPCA Executive Committee shall require) is current and correct for certification of the number of members and such certification must be attested to by the Secretary or Treasurer of Democrats Abroad Ireland. The database referred to in the previous sentence shall be in the format from time to time prescribed by the Executive Committee.

The Secretary shall maintain and, by January 31st of each year, certify a current list of members of the organization (containing the name, mail, and email addresses, telephone and fax numbers and US voting district/State and such other information as the DPCA may from time to time require); maintain minutes of all meetings; maintain all files and administrative records of the organization. All such records shall be open for inspection by members.

The Treasurer shall manage the finances of Democrats Abroad Ireland, maintain its financial reports, and make and maintain such financial reports as may be required by law (including without limitation the laws and regulations of the United States and the several States applicable to political parties and contributions to them). All such records shall be open for inspection by members. The Treasurer shall consult with the International Treasurer of DPCA from time to time on matters concerning the maintenance of financial records and financial reporting (notably to the United States Federal Election Commission).

Section 11.1: The Executive Committee shall be composed of the Chairperson, Vice Chairperson, Secretary, Treasurer, Counsel, and at least two (2) and up to four (4) Members-at-Large, one of whom must be a Young Democrat, elected from among the eligible members of Democrats Abroad Ireland. The chairpersons for the Standing Committees shall be ex-officio members of the Executive Committee with full voting privileges.