Democrats Abroad is running a grassroots campaign in support of Residency Based Taxation.

The US is the only developed nation that taxes its citizens on income earned while they live abroad. This system is complicated, inefficient, and causes uncertainty for ordinary Americans living outside the US. Democrats Abroad favors Residency Based Taxation because it is a simpler, fairer, and more efficient system.

Ordinary Americans living outside the US, even those that earn very little income, are burdened not only with increasingly complex and costly forms and filings, we are also obliged to submit reports on our foreign accounts and other financial assets. For this reason, Democrats Abroad has supported Residency Based Taxation since our inception. It has been a high priority in our Platforms and on Capitol Hill during our Congressional Door Knocks.

Now that Congress is planning to introduce a comprehensive tax reform package the time is right for all aggrieved non-resident Americans to raise their voices and be heard on this matter. Democrats Abroad advocates for a system of Residency Based Taxation that introduces fundamental, common-sense reform while protecting American values of fairness and responsibility. 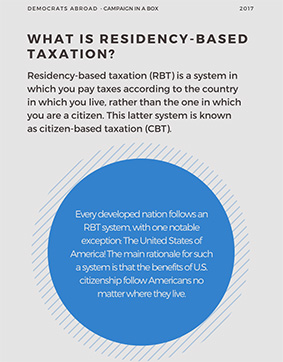 Click here for the Residency Based Taxation Campaign In A Box.  It includes:

Contact Carmelan Polce at any time with questions:  [email protected]

We believe Congress has an opportunity to enact common sense reforms that clarify and simplify filing and make the tax code fairer for all Americans. The advantages of changing to Residency Based Taxation must primarily benefit ordinary Americans living and working overseas, without enabling a few to take advantage of new loopholes.

Democrats Abroad has given careful consideration to the potential impact of a change to Residency Based Taxation. We support efforts being made to structure a Residency Based Taxation proposal (hyperlink to ACA webpage) that results in a policy that is revenue-neutral to the federal government. Because we would not, for example, abide a tax reform plan where school lunches were eliminated so that our taxes become simpler. Common sense tax reforms must not become a quid pro quo in order to starve programs that benefit children, the elderly or otherwise vulnerable Americans.

Democrats Abroad will only support reforms that help reduce inequality, boost opportunity and raise enough revenue to meet public needs, predominantly from those with the greatest ability to pay.