Editorial: The Gay Agenda for 2022

The DAUK LGBTQ+ Caucus kicked off this election year with a discussion of “The Gay Agenda" for 2022.

During the webinar, we heard from Sam Alleman, LGBTQ+ Coalitions Director at the DNC, to hear about measures the Biden Administration has taken to advance protections for LGBTQ+ people. These efforts started with signing executive orders on LGBTQ+ rights within hours of taking the oath of office — including preventing and combating discrimination on the basis of gender identity or sexual orientation and the whole-of-government initiative establishing efforts to advance equity and justice for communities who have been left behind, underserved, or discriminated against by federal policies, laws, and programs, including LGBTQ+ communities. They also included lifting the ban on transgender military service and providing Americans with same-sex partners with an equal pathway to registering their children born abroad as U.S. citizens.

I joined Alleman to speak about the state of play across the country — and the role each of us has to play in advancing LGBTQ+ rights ahead of the midterm elections. The event was moderated by Caroline Ruchonnet and organized by DAUK LGBTQ+ Caucus chair Austin Allaire.

Republican state legislatures across the country have been targeting some of society’s most vulnerable — LGBTQ+ youth. Nearly 240 anti-LGBTQ+ bills have been filed in the first three months of 2022 alone, half of them targeting transgender people. From Florida’s “Don’t Say Gay” bill to Iowa’s new anti-trans sports law, we are seeing Republicans enact a hateful, bigoted agenda which jeopardizes the hard-won progress of the LGBTQ+ community.

LGBTQ+ issues are expected to be highlighted throughout the 2022 election cycle, making it critical that Democrats use the opportunity to speak to the issues. Relational organizing will be more important than ever — checking in with friends and family to find out if they’re registered and ready to vote.

The panel noted that getting out the vote in the 2022 midterms is as important as it was in 2018 and 2020, when Democrats took power in the House, Senate and won the presidency. With Democrats Abroad mobilizing voters in all 50 states, DA is a good partner for the DNC and the DNC LGBTQ Caucus, to bring attention to local and state issues while encouraging Americans overseas to vote. U.S. democracy itself is at stake.

If you missed it, you can watch the event here.

(Let us know what you think about anything you read in the Newsletter. Or let us know if there’s something we should cover. Email us your feedback to [email protected].)

In the news: Trans Day of Visibility celebrated with X gender markers, a warning against anti-LGBTQ+ laws, and a “Jeopardy!” champ

The annual Transgender Day of Visibility was March 31, and both the Democratic Party and the Biden White House marked the occasion.

“Every American deserves to be treated with dignity and respect — that includes trans and nonbinary Americans,” said DNC chair Jaime Harrison and DNC LGBTQ Caucus Chair Earl Fowlkes, in a statement. “Today, we celebrate the countless ways trans and non-binary Americans have and continue to make our nation great. From the arts to activism, our armed forces to the highest levels of government, trans and non-binary people have played an essential role in making our nation better and pushing it closer towards progress.”

They also took aim at Republican officials and legislators who are aggressively targeting LGBTQ+ Americans. “Republicans across the country continue to use their power in state and local government to target trans children and make life more difficult for these vulnerable kids and their families. Last year alone, we saw more than 100 anti-trans bills introduced across the country — many of them targeting kids.”

Also marking Transgender Day of Visibility, the U.S. Department of Justice issued a letter reminding states that targeting trans people for discrimination is a violation of federal law.

In the letter addressed to states’ attorneys general from Kristen Clarke, assistant attorney general in the DOJ’s Civil Rights Division, she wrote, “The U.S. Department of Justice is committed to ensuring that transgender youth, like all youth, are treated fairly and with dignity in accordance with federal law. This includes ensuring that such youth are not subjected to unlawful discrimination based on their gender identity, including when seeking gender-affirming care. We write to remind you of several important federal constitutional and statutory obligations that flow from these fundamental principles.”

The letter also coincided with the recent passage of Florida’s Parental Rights in Education bill, the so-called “Don’t Say Gay or Trans” bill, that was signed into law by Gov. Ron DeSantis on March 28.

“People who are transgender are frequently vulnerable to discrimination in many aspects of their lives, and are often victims of targeted threats, legal restrictions, and anti-transgender violence,” Clarke wrote. “The Department and the federal government more generally have a strong interest in protecting the constitutional rights of individuals who are lesbian, gay, bisexual, transgender, queer, intersex, nonbinary, or otherwise gender-nonconforming, and in ensuring compliance with federal civil rights statutes.”

The Biden Administration also used the occasion of the Transgender Day of Visibility to announce that its perviously announced decision to add an X gender marker to passports would go into effect on April 11.

The Transportation Security Administration (TSA) also announced it will be changing scanners to remove gender.

“The Department of State has reached another milestone in our work to better serve all U.S. citizens, regardless of their gender identity,” Secretary of State Anthony Blinken said in a statement. ”In June, I announced that U.S. passport applicants could self-select their gender and were no longer required to submit any medical documentation, even if their selected gender differed from their other citizenship or identity documents. Starting on April 11, U.S. citizens will be able to select an ‘X’ as their gender marker on their U.S. passport application, and the option will become available for other forms of documentation next year.”

In the press room after her White House visit, she was asked if she had any comment on the plethora of anti-trans bills such as in Florida and Texas.

“They’re really scary,” she said, “and some of them in particular are denying medical services to trans youth. Those are life-saving medical treatments and these bills will cause the deaths of children, and that’s really sad to me and it’s really frightening.”

When asked what she hoped her White House visit would accomplish, she said, “Just the same thing that I’ve been accomplishing, which is being a trans person out there that isn’t monstrous and isn’t threatening and is just a normal person like we all are. So the more people like me can be seen, the harder it is to sustain the myths that are kinds driving a lot of this hate and fear.”

Starting a local DA LGBTQ+ caucus in a nutshell

by Betsy Ettorre, member of the LGBTQ+ Steering Committee and chair of the Global Seniors Caucus

Here are the steps you can take (Do not worry, they are easy, and you can have help too):

In a same-sex marriage and receiving Social Security? You may be eligible for a 50% increase

A few years after our marriage, an American friend of mine told me that my wife could receive an amount of 50 percent above my Social Security benefits. Nonsense, I said. Surely this benefit was limited only to straight couples and American citizens.

Not true! Even though my wife was not a U.S. citizen, she was eligible to file for a supplemental 50 percent of my retirement monthly income. One caveat, however: If both spouses are American citizens and receiving Social Security benefits, then the spouse with the lower income can opt to receive 50 percent of the benefits of the other spouse.

I contacted the American embassy, which confirmed she was entitled to apply for a supplemental 50 percent of my Social Security monthly check. We showed proof of our marriage and proof we were living together. Her checks began several months later and continue to this day.

Who knew?! Maybe you already did know this, but if you didn’t, then read on to discover other benefits your same-sex marital status offers you.

“Here are five things you should know about our benefits for same-sex couples:

“Legal same-sex marriages will now be treated in the same manner as opposite-sex marriages regarding federal employee benefits. Including options to:

“The Family and Medical Leave Act (FMLA) definition of a spouse covers a partner in any legally recognized marriage. You are entitled to use FMLA leave to care for a same-sex spouse with a serious health condition. For additional information, see OPM’s FMLA Fact Sheet.

“New Guidance from SSA on Spousal & Survivors Benefits for Married LGBT Individuals on March 1, 2017, the Social Security Administration (SSA) announced it would reopen any decision to deny spousal or survivors benefits to a same-sex spouse based on a discriminatory marriage ban, which resulted in a loss of benefits to the individual who filed the claim. help individuals in same-sex marriages who were denied benefits because their marriage to a spouse of the same sex wasn’t properly recognized.”

If you missed them, reach out to the coordinators for the recordings! 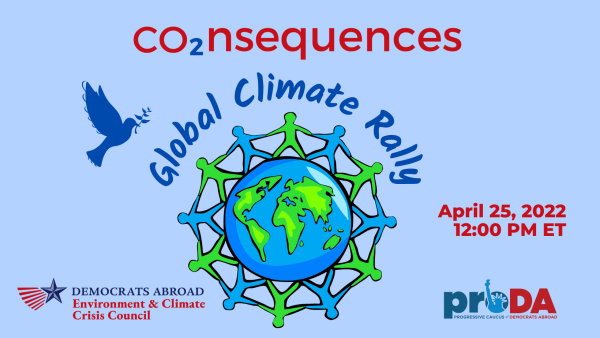 Where are we headed and what can we do to change course? To conclude Earth Month, the Global Progressive Caucus and the Environmental and Climate Crisis Council co-host a global rally, highlighting our climate emergency and what we must do to address it effectively.

Hear from an inspiring roster of elected officials, NGO leaders, climate change experts, organizers, and Democrats Abroad members who will draw attention to the consequences we face and the urgent action we must take now. 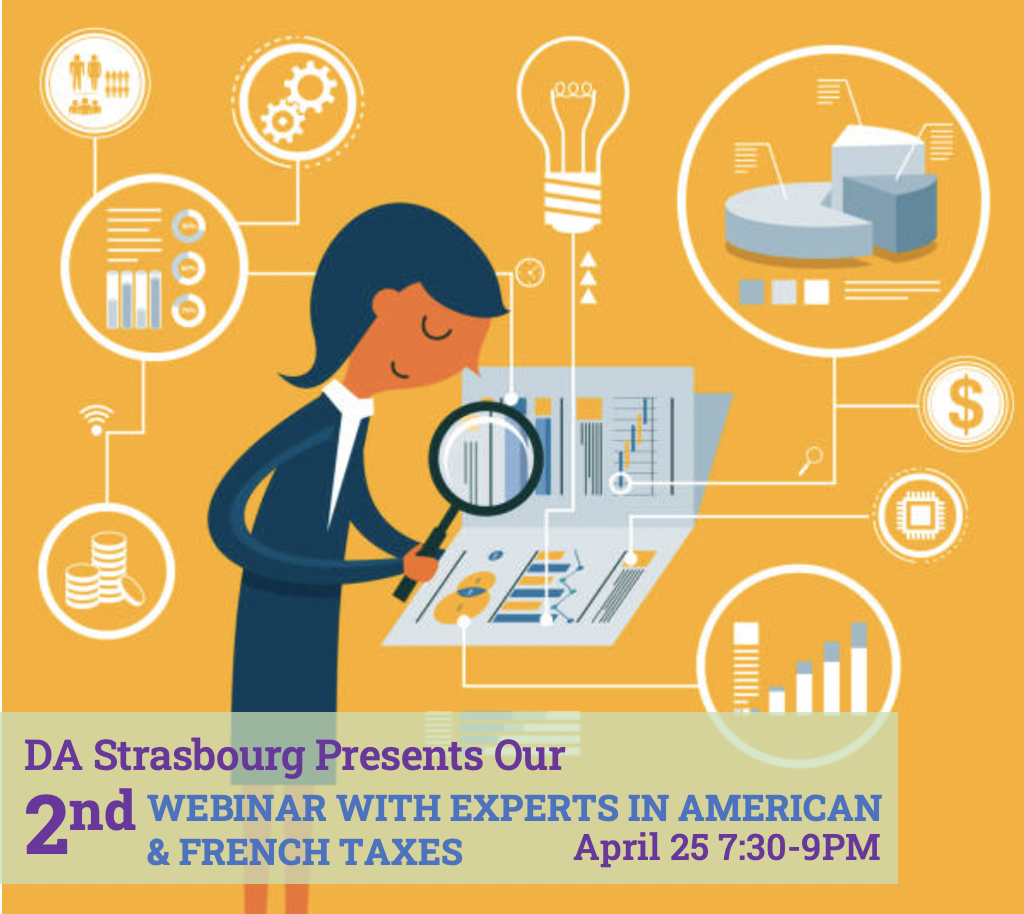 Due to popular demand, DA Strasbourg is pleased to host another online tax seminar with U.S. and French tax specialists, Benjamin Pik and Jonathan Hadida. They have both kindly agreed to lead another webinar on Zoom. So, if you could not join us in March - or you did, and still have questions or would just like to attend again and perhaps learn more - we hope that you can join us for an informative and lively seminar with these accomplished and knowledgeable professionals.

Help us report on key events related to the Democrats Abroad LGBTQ+ Caucus both at home and abroad.

What does being a reporter involve?

If you are interested in being a reporter and member of our Newsletter team, email [email protected] with the subject “Newsletter Reporter” and tell us about yourself, your experience and why you’d like to join our team. We look forward to hearing from you.