Day Two of the Convention

Day Two of the Convention saw the historic roll call vote that nominated Hillary Clinton as the Democratic candidate for President.  Democrats Abroad captured the attention of the world with an emotional vote by Larry Sanders, the brother of Senator Bernie Sanders - the real BernieBro. Many testimonials from ordinary citizens to Hillary Clinton's concern for the welfare of real people followed - capped by a moving message from President Bill Clinton about his wife and their life together. Some more posts about the days events from our Delegates follow.

Here's another post from Reno Domenico - a Clinton delegate from Ukraine - who has a special take on the news from Russia.

The theme of Day 2 of the Democratic National Convention in Philadelphia was bringing unity to the party.  This has been achieved.  When Senator Sanders moved for acclimation of Hillary Clinton’s nomination, Senator Sanders did all he possibly could to bring our party together, and helped lead the fight to elect Hillary Clinton president of the United States.

For me personally it was a tremendously exciting evening to be part of this historic event. The first nomination by a major political party of a woman candidate for president.

The convention was moved. So was our delegation. And the internet and social networks lit up with the video of Democrats Abroad, bringing lots of attention to our small but mighty state committee inside the Democratic Party. Overshadowing our convention however was the fact that the DNC chairperson was replaced by Donna Brazile. Donna Brazile is a highly respected member of the Democratic Party, and her ascension was welcomed.

What caused this change at the top of the party in the middle of our convention was the news that the DNC email server had been hacked, ostensibly  by Russian cyber spies. This has led to serious speculation that the Russian Security Services, and/or the Kremlin itself are directly involving themselves in the American presidential elections.

This narrative is driven by the fact that Donald Trump seems to have, as former Secretary of State Madeleine Albright pointed out last evening, “a fascination with dictators.” Secretary Albright, someone I had the pleasure of interviewing during our Democrats Abroad Global primary, pointed out that Republican candidate Donald Trump thinks very highly of Russian President Vladimir Putin, and has also spoken well about the former Iraqi dictator Saddam Hussein.

Autocrats and dictators are always known as a strong men. That doesn’t make them good. Donald Trump also doubled down, again, on his obsession with weakening our NATO alliance, by reiterating that he thinks the NATO allies of the United States don’t carry their own weight financially and otherwise. This is amazing.

What is the truth in this Russian cyber case? Hard to say.

This undoubtedly would have grave consequences for Ukraine’s position not just politically, but actually geographically. European resistance to the Russian position in Europe has been weakening steadily as time has gone by. Any weakening of NATO  would undoubtedly result and a weakening of the European and American position regarding Ukraine. Donald Trump seems to specialize in playing on people’s fears and making people more afraid. Scared people, and scared nations, do irrational things. Ukraine’s geopolitical situation is precarious at best. Donald Trump’s love of strong men, and his fascination with Russian President Vladimir Putin does not help Ukraine at all.

In this case Ukrainians should be afraid. [And the rest of the world.]

One of the highlights for Democrats Abroad during the Philadelphia Convention was its "40th Anniversary" Luncheon on Tuesday.  Celebrating the 40th Anniversary of its first participation as voting delegates in a Convention AND the 40th anniversary of the first presidential election in which overseas Americans were allowed to fully participate, the Luncheon also focused on the future and our Get Out the Vote efforts for this year's crucial 2016 elections.

We were joined at the Luncheon by speakers Senator Patrick Leahy (VT), Special Guest Speaker Congresswoman Carolyn Maloney (NY 12), the "patron saint" of Democrats Abroad Congresswoman Dina Titus (NV-1), former State Senator Nina Turner of Ohio and Marcel Groen, the State Chair of Pennsylvania who welcomed us to Pennsylvania and spoke about his arrival as an immigrant to the U.S. Several other State Party officials from Georgia, North Carolina, Pennsylvania, Vermont, and Wyoming attended the Luncheon and we also heard from Larry Sanders, Bernie's brother and a Democrats Abroad delegate, and to close proceedings, Ambassador Amy Bondurant, the Clinton campaign representative to Democrats Abroad, spoke about our Get Out the Vote campaign.

Congresswoman Maloney, who is co-chair of the Americans Abroad Caucus spoke about her efforts to get HR 3078 passed, which would create a Commission on Americans Living Abroad to review all legislation for its impact on overseas Americans. Senator Leahy spoke about his own background as the child of immigrants.  Senator Turner gave an impassioned talk about the necessity to preserve voting rights - and get out the vote. 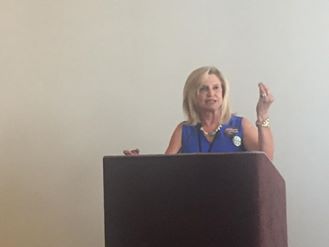 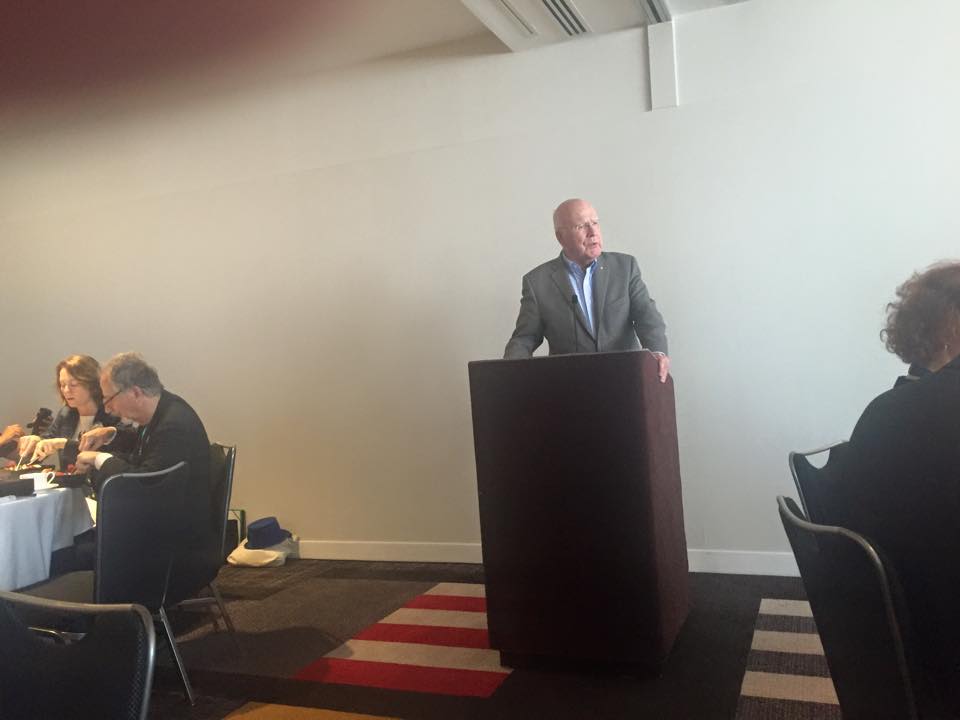 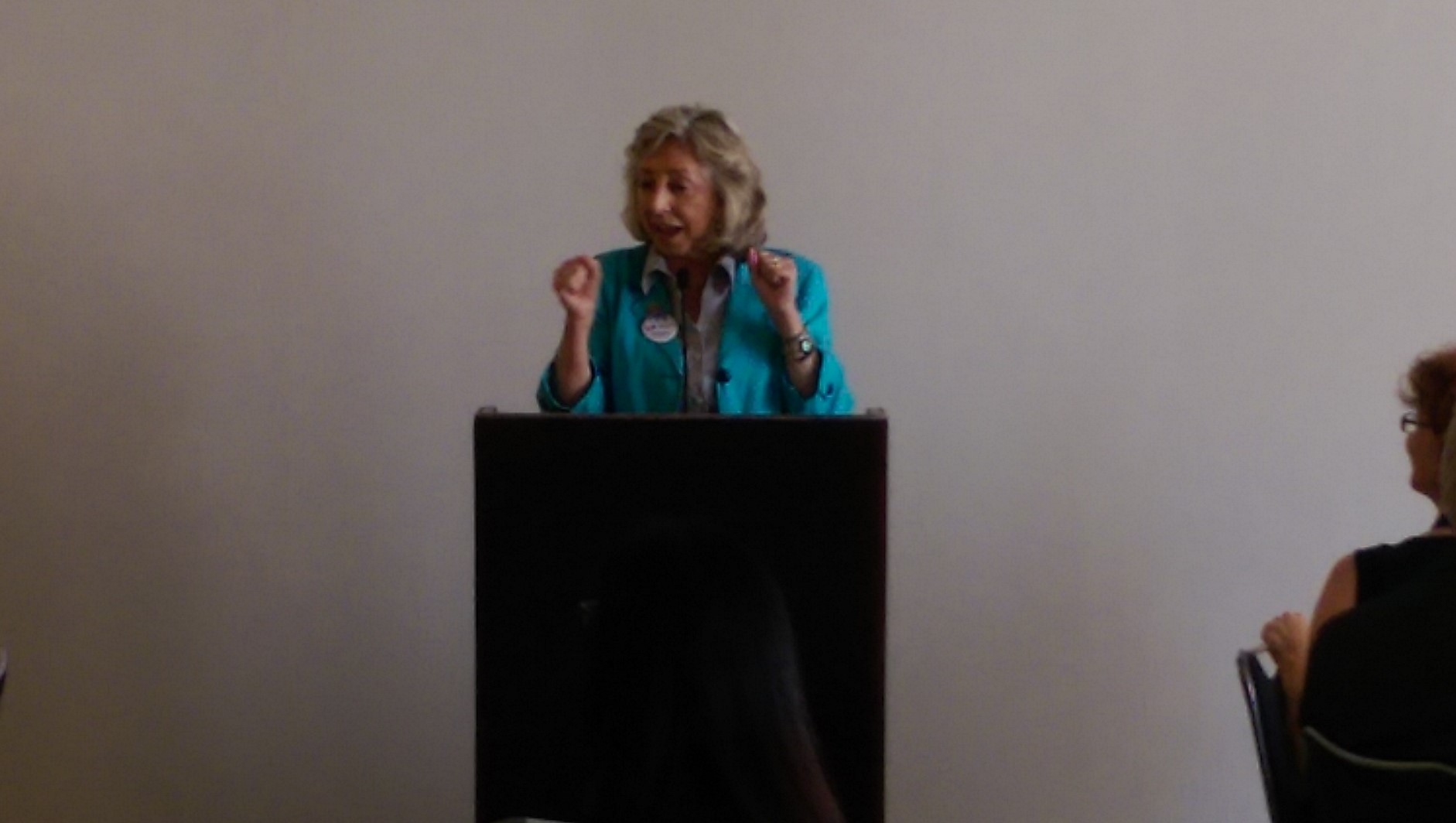