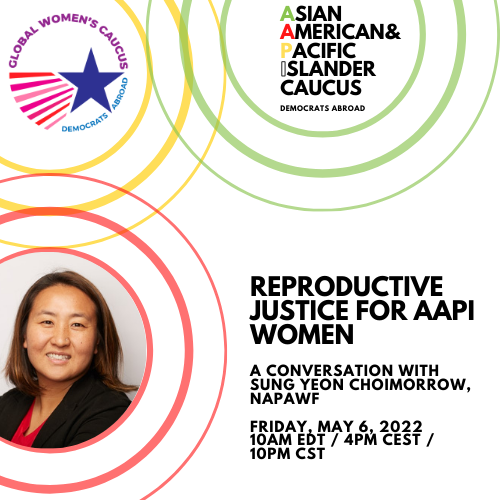 Women’s reproductive rights are continually being threatened in the United States. State legislatures are working to restrict and ban access to reproductive health services, which disproportionately impacts women of color, low-income women, and others facing discrimination. Racist and false sexist stereotypes about Asian American and Pacific Islander women are used to often justify bans on abortions and excuse racial profiling. The National Asian Pacific American Women’s Forum (NAPAWF) is working to protect and provide a voice for AAPI women. They are working to make sure their needs are heard at the local, state, and federal levels.

In honor of AAPI Heritage month, join the Global AAPI and Women’s Caucuses as they speak with Sung Yeon Choimorrow, Executive Director of NAPAWF. We will talk to her about NAPAWF’s efforts to fight for reproductive justice for AAPI women and girls, specific challenges faced by AAPI, and how they are working to engage AAPI women and girls.

RSVP to receive the meeting information and please share this event!

Sung Yeon is a first generation Korean American immigrant working mom who is passionate about building power to create change so her daughter can live in a more just world than the one she inherited.

Sung Yeon leads NAPAWF as their executive director with the vision to build power with AAPI women and girls in the United State to create change so that we can have agency to make decisions about our bodies, lives, families and communities. NAPAWF works to engage voters to get out and vote as well as continue to engage in advocacy on issues that impact AAPI women and girls the most such as immigrant rights, reproductive health and rights, affordable health care and economic justice.

Before working at NAPAWF, Sung Yeon was the Director of Organizing at Interfaith Worker Justice (IWJ) leading collaborative work with community organizations, unions and faith communities on worker organizing and worker justice public policy. Prior to IWJ, Sung Yeon was a Community Organizer at Asian Americans Advancing Justice-Chicago where she created a pan-Asian American community coalition in Chicago to work together on elections, immigration reform, the state budget, and redistricting.