Women’s rights are human rights, except in Texas

US democracy is entering a frightening, dystopian new era. The US Supreme Court’s tacit, and 24 hours later, explicit, endorsement of a horrific new antiabortion law in Texas portends a new kind of governance at the state level – which is where all the anti-democratic (note the small “d”) action is happening these days – but that will almost inevitably have national implications.

The loss of ability to make one’s own healthcare decisions is appalling, and yet this may not be the most horrifying aspect of the new law, known as SB8. The new Texas abortion ban includes a novel enforcement method, whereby ordinary citizens are essentially deputized to enforce the law and are financially compensated for doing so. As Justice Sonia Sotomayor explained in her dissenting opinion, Texas lawmakers “fashioned this scheme because federal constitutional challenges to state laws ordinarily are brought against state officers who are in charge of enforcing the law.” By extension, if no state officer can enforce the law, it is unclear whether anyone can be sued to block it. Under this evil design, and with the blessing of Mitch McConnell’s Supreme Court, SB8 will be enforced by vigilantes and bounty-hunters. And the slipperiest of all slopes: who’s to stop other states from copying and pasting this legislation and enacting it as well, or from using the same vigilante model to enforce other controversial laws going forward? 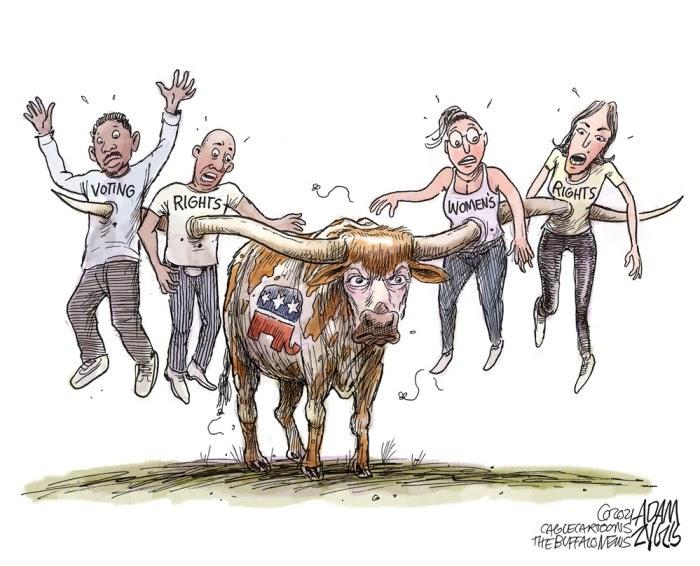 Are we witnessing the demise of US voting rights?

It’s nearly impossible to keep track of all that’s going on in the world right now, but we cannot afford to look away or become distracted. In 2020, Democrats won the White House and a majority of seats in the House and Senate, but we did not do as well at the state level. That’s where the radical right-wing party formerly known as the GOP is working hard and fast to suppress our rights. Americans no longer have the luxury of trusting in the system of US democracy – casting our votes every 2 or 4 years and blithely disconnecting in between – because the system is being actively sabotaged at the state level. We must act now! If we wait until 2022 to show our support for President Biden and Democratic party principles, it will be too late. The damage has already been done in states like Texas, where in addition to the abortion ban, historically restrictive voting legislation (SB1) was finally rammed through the legislature and sent to the governor’s desk for his signature last week. Other Republican-controlled states are passing similarly restrictive state laws, under the guise of addressing voter “concerns” about election integrity (concerns that were sparked by Republican lies about the outcome of the 2020 election). Consequently, many of our votes will be nullified or certain citizens will be prevented from voting altogether in 2022 and beyond. Add to that the gerrymandering soon to begin, and the outlook is grim indeed.

Republicans know that their policies are unpopular, particularly the extreme right-wing policies that have taken over that party in the wake of the previous administration. As they cannot win the popular vote, they must trick the system to retain power, and that is what they have been busy doing throughout 2021. Their techniques are many and diverse, ranging from restricting mail-in voting in Georgia to recalling a popular Democratic governor in hopes of installing a far less popular Republican who could never win in California’s general elections (more on that below). Even more nefarious tricks have been proposed by the likes of Steve Bannon (remember him? – heck of a guy), who is leading a precinct-level strategy.

They’ve taken the fight to the state level, and that is where we must fight back. Voting Rights Lab has developed a useful resource to keep track of what’s going on state by state. If you want to get more involved with and informed about what’s going on in the state where you vote, consider joining one of the Democrats Abroad state groups.

Related Events: A global meeting on this initiative will be held on September 12 (RSVP here). Two of the state groups initiative’s passionate leaders have been invited to speak at the September 14 La Lucha Continúa meeting, hosted by the Barcelona chapter and open to all DA Spain members.

Ultimately, however, the only way to preserve US democracy is for the Senate to pass S1, the For the People Act, together with the John R. Lewis Voting Rights Advancement Act. Both bills, which would supersede and nullify many of these insane state-level bills, have passed the House and will be taken up in the Senate as soon as it reconvenes later this month. It’s now on every patriotic American to communicate their support for these bills to their two US Senators (yes, including the Rs), even if passing them requires modifying or ending the filibuster. Here’s how to contact your Senators – please do it right away, and at least once.

This is not a drill, it is a break-glass moment.

More than once this year, I’ve had the terrifying sense that a silent civil war is creeping its way through the US – state by state. Not the violent, bloody kind. No burning buildings, nor orphaned children. Not the kind of war that makes you sit up straight and take note. It’s been much sneakier than that, and much less honest. It’s finally taken its ugly hold on California – the most unlikely of places. California Republicans are actively attempting to overthrow their democratically-elected governor, but most of us are too asleep at the wheel to notice that an invisible militia of California’s minority is rolling its heavy tanks down Sunset Blvd.

Yes, we’ve all witnessed the outrage of Democrats in recent weeks: “How can Gov. Newsom be elected in a landslide, continue to be wildly popular, yet manage to face a recall requiring no more than 12% of California’s votes?” But don’t tune out. Don’t skip this crucial election, hoping that your friends back home will fight the Republican minority on your behalf. The 2016 presidential race should have taught each of us that we can’t predict who wins elections – no matter how preposterous the Republican candidate. 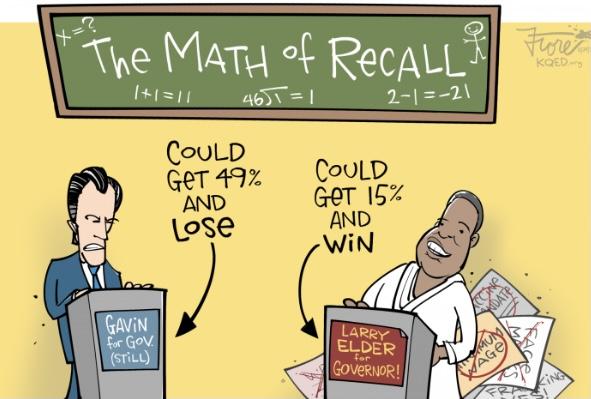 If you’re a California voter and still on the fence as to whether your vote matters, consider this: The intent of the 1911 law that enabled this recall election was to protect voters from ineffective government. The thinking was that voters should have the right to act on their buyer’s remorse. This recall, however, smacks of something far more sinister. What’s become increasingly clear is that Republican tactics have escalated with each election cycle. The Republicans ala Newt Gingrich seem downright quaint and subdued when compared to the rabid variety of today’s radical fringe. Fringe used to mean outlier – a group of people that were tolerated, yet regarded as unstable and toxic. Now, that radical fringe mindset has infected every conservative lawmaker, like an out-of-control Delta variant.

Today’s Democratic party has the difficult task of fighting against the dirtiest tricks, designed to set fire to the pillars of our democracy – tricks that, if used a few short decades ago, would have brought shame and dishonor upon conservatives. Tricks that would have raised both of Richard Nixon’s bushy eyebrows. This war against our democracy is being waged by fraudsters who operate under a unified motto: If you can’t win, cheat! Suppress as many blue votes as possible. If that doesn’t work, say blue votes were fraudulently cast. If that doesn’t help you win, sabotage the voting equipment. Still nothing? Try cherry-picking who gets to vote in what district. And as a last resort, gather 1,495,709 of your best Californian buddies for a sign-my-petition-athon. Sure, that’s just 12% of California’s voters (a super-minority, if you will), but evidently it doesn’t take that many Republicans to steal an election.

In our August issue of this newsletter, we gave you a brief overview of the California law that made this recall election possible. There is a real danger that this could be a 2016-style close election. Every Californian must vote, to keep a Republican candidate like the extremist talk radio pundit Larry Elder from taking hold of California. This man has never spent a day in public office. He’s not a trained politician. His experience in leading government is zero. Sound familiar? Additionally, if this recall election succeeds, expect it to happen again whenever a Democrat wins in that state. It will become a tool for the minority party to seize power in California.

California has enacted environmentally-focused legislation that is light-years ahead of federal regulations. With its population representing nearly 12% of all Americans and with the fifth largest economy in the world, California’s efforts to limit its carbon footprint have been hugely impactful. Larry Elder has vowed to roll back some of CA’s environmental legislation, including its Environmental Quality Act. He would also eliminate unpaid leave for new parents or medical emergencies, eliminate minimum wage in the state and curb vaccine and mask mandates. His past statements suggest that he believes women know less than men about political issues, economics and current events, and can therefore be more easily misled. One of his more diabolical plans is to declare a state of emergency in order to fire 5-7% of teachers.

We’ll leave you with a final nightmarish thought: Heaven forbid anything should happen to 88-year-old Senator Dianne Feinstein, but were that to happen, her replacement would be appointed by the sitting governor. If Newsom loses the recall and a Republican candidate wins, it could result in Democratic loss of control of the US Senate, thereby torpedoing Biden’s policies, together with any possibility of the passing of national voting rights legislation. If you’re still not anxious about the outcome of this election and its implications, have a look at this NYT Op-Ed by Ezra Klein.

California voters: Please take our democracy seriously and vote “NO” to recalling Gavin Newsom, on behalf of everyone. President Joe Biden, DNC chair Jamie Harrison and your fellow Americans thank you for your service! 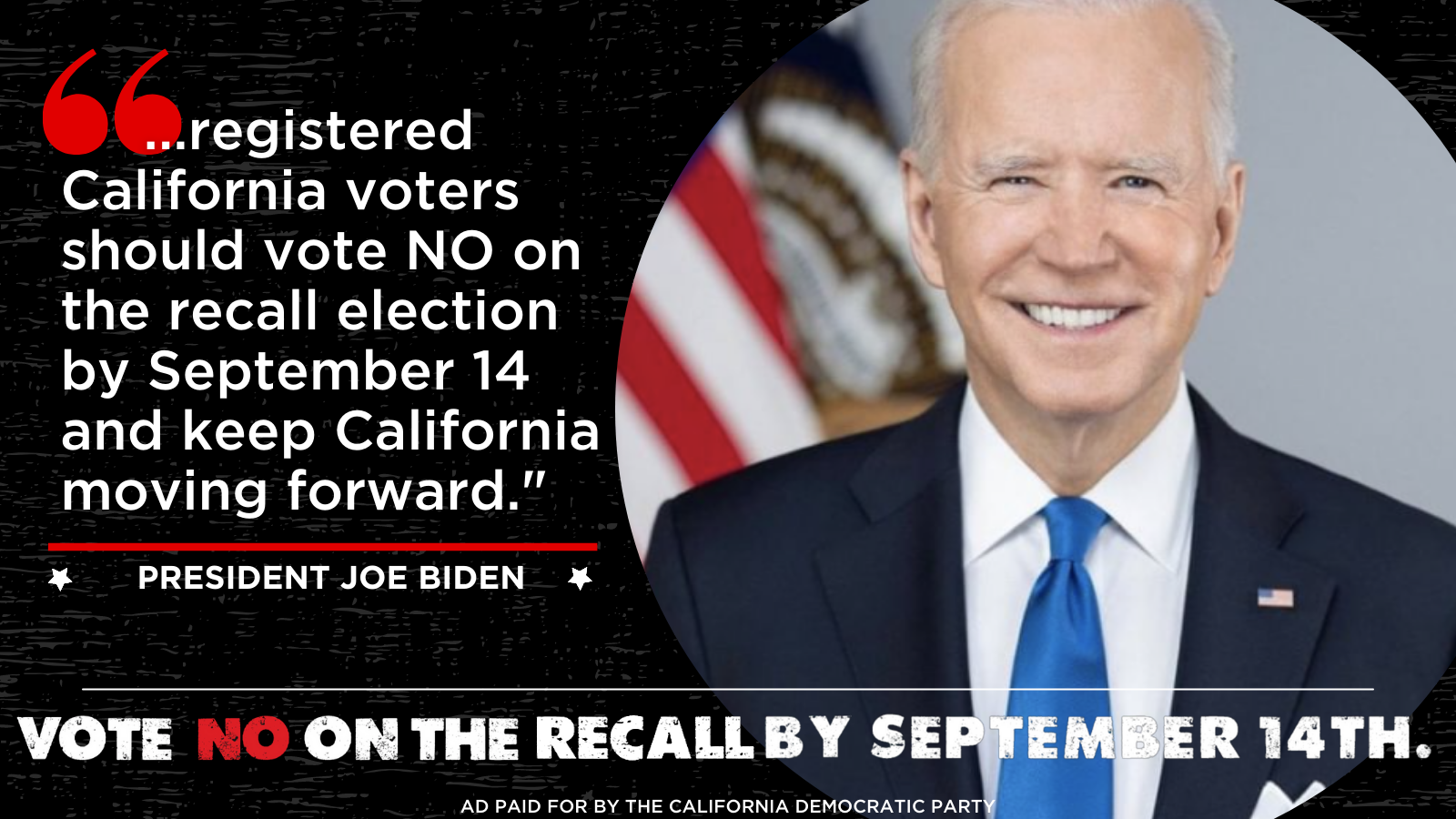 Other important state-level elections are also coming up this fall, and your votes matter! Click here for all the information you need to vote in this year’s important elections in Virginia, New Jersey, Ohio and Florida. Democrats cannot afford to lose a single one of these important races, and once again our overseas votes may determine important outcomes.

Here in our adopted home of Spain, abortion has been legal since 2010. Voluntary interruption of pregnancy in Spain is regulated under Title II of the Organic Law 2/2010 of sexual and reproductive health and abortion, which came into force on July 5, 2010. Termination of pregnancy is also permitted at later stages when there is serious risk to the health of the woman or fetal defects. According to Wikipedia, abortion remains a controversial political issue in Spain, but regular moves to restrict it have lacked majority support. Nonetheless, abortion rates have been falling in recent years, coinciding with improved access to emergency contraception.

We hope you enjoyed the September Newsletter - Special Edition.

To stay on top of all the news, follow Democrats Abroad Spain on social media.

And please forward this email to your American friends in Spain who may not know us!