Volunteers in France came out to GET OUT THE VOTE. Thank you!

The 2018 Blue Wave arrived on November 6th.  Democrats took back the House of Representatives with a blue tide of exceptional candidates - many of whom who broke through barriers to win election - women, minorities, LGBTQ and many more...

Historic midterm election voter turnout powered the tide.  Grassroots activism both in the US and overseas drove the get out the vote effort.  Across France, there was an outpouring of enthusiasm from volunteers. Phone banking, postcard writing, texting, walk-in voter support, student outreach, conferences...

"Our volunteers have done a remarkable job this year,” says Julia Bryan, International Chair of Democrats Abroad. “We made over 150,000 calls to members, and registered tens of thousands of new voters through online outreach and in person voter registration drives. The work paid off: voter engagement has increased 800% since the last midterms in 2014, and we know that votes from abroad will made a big impact in races across the country."

The leadership of Democrats Abroad France, the Avignon, Bordeaux, Brittany, Grenoble, Lyon, Normandy, Paris, Riviera, Strasbourg, and Toulouse chapters as well as the Women’s, Youth and Diversity caucuses would like to thank each of the volunteers who participated in getting out the vote! You powered the wave.  Now, on to the 2020!

Democrats Abroad went into action on Saturday evening Nov. 10 as Donald Trump arrived in France. Their candlelight vigils showed him what they think about his 'leadership.'   SUPPORTING the TRUE American values including humanitarian concern for others, the first amendment, respect for science, respect for journalists, freedom from discrimination based on sexual orientation, equality for women and people of color, care for the environment and dedication to fair play and true democracy. HONORING American victims of right-wing hate crimes inspired by Trump's rhetoric. And RESPECTING our Constitution and the right to pursue investigations without hindrance.

🇺🇸 ALREADY VOTED? GET YOUR "I VOTED STICKER"

Get a digital "I VOTED" sticker that you can share on social media! Tell your friends to join the #BlueWave! Click here.

🇺🇸 HAVE YOUR BALLOT?

VOTE and return your ballot NOW. Rules for ballot return vary by state, even by voting region, so always read the instructions that came with your ballot carefully.

If faxing your ballot: Please read the instructions carefully for your state. Note that the Federal Voter Assistance Program has a FREE email-to-fax service for those whose states allow faxed ballot return.

🇺🇸 WAITING FOR YOUR BALLOT?

Take action! Call or email your local elections official right away! Confirm that your registration is in order, and ask them to send you a ballot. (Be sure to check your email SPAM folder if you have asked that your ballot be sent to you by email/online!)
• You can look up your election official contact information here:https://www.votefromabroad.org/vote/eod.htm?submission=true

🇺🇸 STILL NEED A BALLOT? DO IT NOW!

For many it is still possible! To fill out a registration/ballot request form, also known as an FPCA, go here: http://www.votefromabroad.org.

Answer the questions, then print, sign and return the forms as instructed. We strongly advise that you choose to receive your ballot by EMAIL/ONLINE, and that you send in your signed form by EMAIL.

🇺🇸 MISSED YOUR DEADLINE? DO IT ANYWAY!

For states where deadlines have passed, sending in a ballot registration/request form now can still be worthwhile as it will bring your registration information current with your state, and help you be ready for the next election — there are already three special state elections scheduled for 2019!

As critical as these elections are, it will take more than one election to make things right. Stay engaged. Vote, volunteer. Check out the DAF events calendar for Election Results events, and other upcoming events near you. Click here.

🇺🇸 HAVE QUESTIONS OR NEED HELP?

Volunteers are standing by to help. Please email USVoterHelpFrance@gmail.com or Help@VoteFromAbroad.org.

ARE YOU ENRAGED? GET FIRED UP AND HELP TO GET OUT THE VOTE!

We can all contribute to make sure that the #BlueWave crosses the United States on Election Day.

DA France has challenged other DA CC's to join their Phonebanking competition to call 50 voters for the 50 Senators who voted to force their temperamentally unfit and highly partisan nominee onto the United States Supreme Court. DA Switzerland has accepted our challenge!

Let's show our neighbors what we are made of. When we take back the House (and maybe the Senate), we will all be winners!

Any DA member can phone bank from home, if you want to get started on your own find all the info you need at https://www.democratsabroad.org/phonebanking.

For previous ceremonies at US cemeteries, the massive number of those fallen were collectively honored. The approach at the Centennial on August 25th, 2018 in Coulonges Cohan was the opposite. 100 years ago during World War I, the death of one remarkable 20-year old pilot, Quentin Roosevelt was commemorated as that of an emblematic hero representing the fate of the many.  He was the son of a former President of the United States who was shot down at the commands of his airplane. At the tombstone where the plane was downed, many local and regional organizations laid wreaths. I had the honor of laying a wreath of flowers that designed our flag, on behalf of Democrats Abroad France. The honor was compounded by the presence of descendants of the Roosevelt family, some local, some whom I believe came especially from the U.S.

The multi-generation element was touching. A 12-year old namesake, Quentin, a local French youngster, gave a determined speech to “Quentin R” saying “you were my age when you came to France, you saw the air show at Reims and decided you wanted to fly planes". The story of how it all started, with a school boy saying he wanted to make a copy of the plane that was shot down, was inspiring. Big trees from little acorns grow!

What would you change about the Democratic Party?

On May 17,2018 members of Democrats Abroad Lyon Chapter met to discuss the topic “What would you like to change about the Democratic Party?” The session grew out of hearing frequent objections from liberals and progressives to the behavior of our party before, during and after the 2016 Presidential election.

Our intended agenda was to look at the Democratic Party Platform and evaluate whether it addressed and prioritized issues correctly, and then to look at the Unity Commission Report to see if it went far enough to right the wrongs identified since the election.

It quickly became apparent that our members were not interested in evaluating policy. Instead, they had enormous pent up disappointment and doubt that needed to be expressed. We were lucky to have a diverse group representing both the East and West coasts of the U.S., as well as a few folks from the heartland. We were also fortunate to have a millennial with us who was very eloquent about the disenchantment of his generation with the party’s process.

The discussion was emotional. There were two main themes: expressions of angst over broken problems and suggestions for reforms and solutions. Here are extracts from the evening’s conversation.

Broken Promises and other problems

“We need a candidate who embodies both parts of the party, mainstream and progressive.”

“The Democratic party needs to learn how to address the political, geographic and rural center of the country if it is to win a national election.”

“The most energetic voters are the far right and the far left.”

“The Democratic Party has become just another party of white men.”

“The Party underestimates how much disappointment exists over the performance of the Obama administration.”

“The Party spit in the face of young voters. They need to do something to restore opportunity if they want to keep young voters.”

“There has been a loss of faith that the party will do what they say they will do.”

“The Party uses black voters for their purpose (to get elected) and then ignores them when governing.”

“During the campaign, the Republicans had a wider field of candidates and therefore their process looked more transparent. It appeared that, on the Democratic side, the DNC put their fingers on the scales.”

“Voters don’t care about platform. Politics is an emotional game. We need to build a brand and create brand loyalty, revisiting the concept of Yellow Dog Democrats who would vote for a yellow dog rather than a Republican.”

“Build and strengthen our ties with universities, creating international connectivity among universities and a global movement.”

“Work towards a constitutional amendment on congressional term limits.”

“Radicalize the middle because the progressive agenda is best for them too.”

“Hold election day on a weekend to improve voter turnout.”

JUNE AND JULY BRING OUT RESISTANTS ACROSS FRANCE

Democrats Abroad France organized rallies and candlelight vigils across the country with “Families Belong Together” events in Paris, Lyon, Grenoble, and Toulouse to protest Trump’s pointlessly cruel “Zero Tolerance” policy towards refugee and immigrant families, and a July 4th “Vive La Resistance” apero/picnic by the Seine in Paris with coalition partners to register voters and organize for the Fall.  On June 30th we marched in the LGBTQ Gay Parade.  With just four months ahead of us, we must continue to mobilize voters to speak out and defend our Democratic Party values.

Lest We Ever Forget - Memorial Day Ceremonies in France

Every year, Democrats Abroad France remembers the fallen soldiers who bravely died while serving in the US Armed Forces.  Decorating graves to remember the dead is an ancient tradition that continues to this day. In America the tradition began with those who died in the Civil War.  All are invited to attend.  Since 1918 is the 100th Anniversary of WWI, the ceremonies will be grandissime.    We will be laying wreaths in ceremonies throughout France on the graves of these heroes on the following dates:

Memorial Day Ceremonies Meuse-Argonne May 27th at 11am

Memorial Day Ceremonies Lafayette Escadrille May 27th at 10am

Memorial Day Ceremonies Epinal May 27th at 10:30am 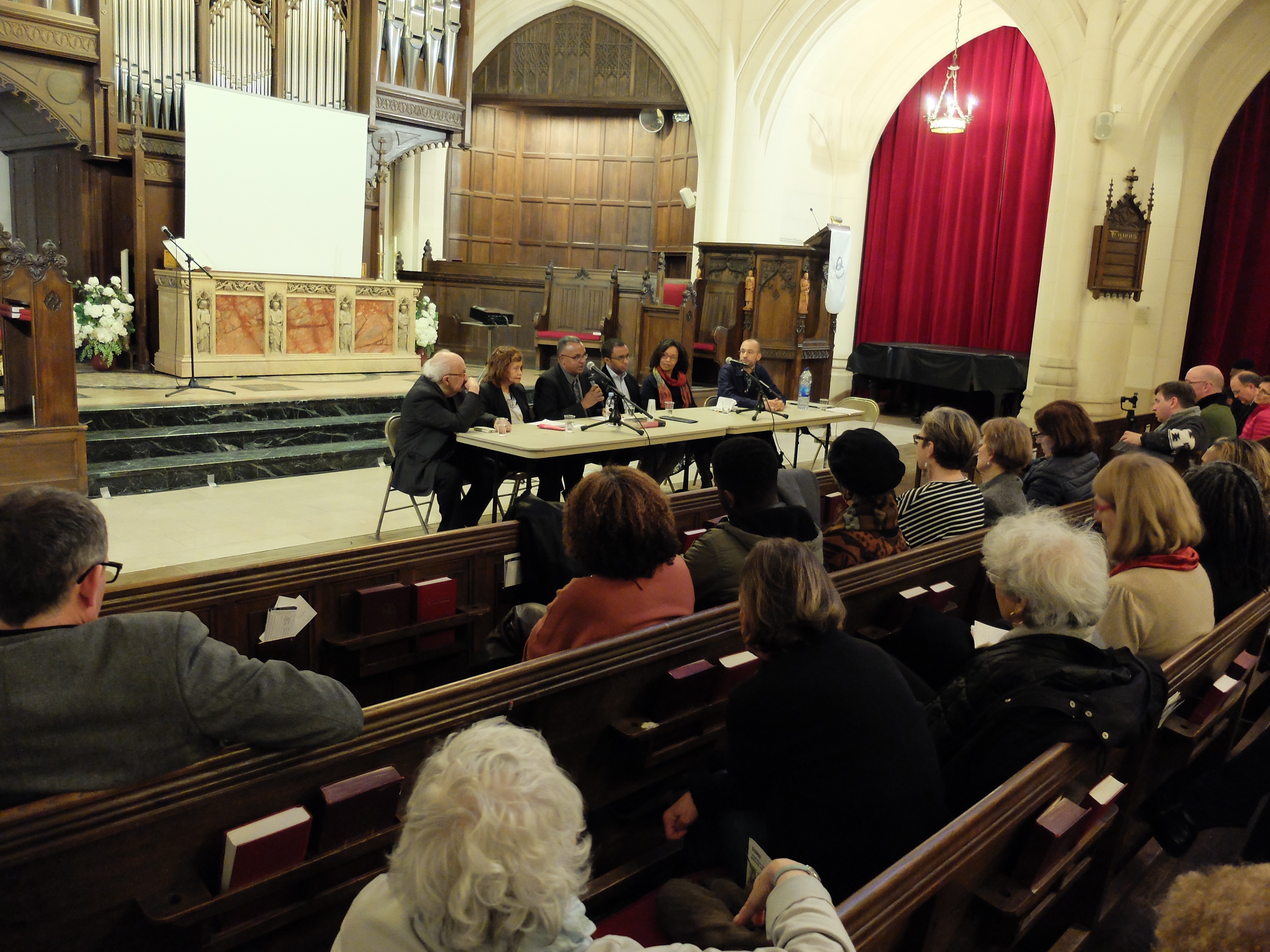 On April 5, we honored the life and legacy of Dr. Martin Luther King on the 50th anniversary of his assassination. The event was held in the sanctuary of the American Church in Paris where Dr. King himself spoke in October of 1965, and the Church was full. The program was organized by co-Chair of the Diversity Caucus, Reed Kennedy, and included a welcome from church clergy, excerpts from Martin Luther King's writings. music, and speeches as well as a panel discussion on the life and legacy of the civil rights icon. A key moment featured author Jake Lamar reading the moving Letter From Birmingham City Jail from the same pulpit where Dr. King spoke.

For those of you who could not make it to the event, here are links for few pictures (photo credit: Richard Allen) as well as athe livestream video .