Democrats Abroad is holding its 2019 Global Meeting from May 17-19 in Washington, D.C. We will discuss charter amendments and resolutions; run training sessions with local experts and Democrats Abroad field volunteers; and hold our biennial DPCA executive committee elections. In addition, there will be regional meetings to elect Regional Vice Chairs and conduct other business.

The agenda includes talks with Democratic Party leaders, both elected officials and members of the Democratic National Committee.

Following the meetings, on May 20-21, we will hold our Democrats Abroad "door-knock" with meetings with Representatives and Senators as well as relevant US federal government agencies. 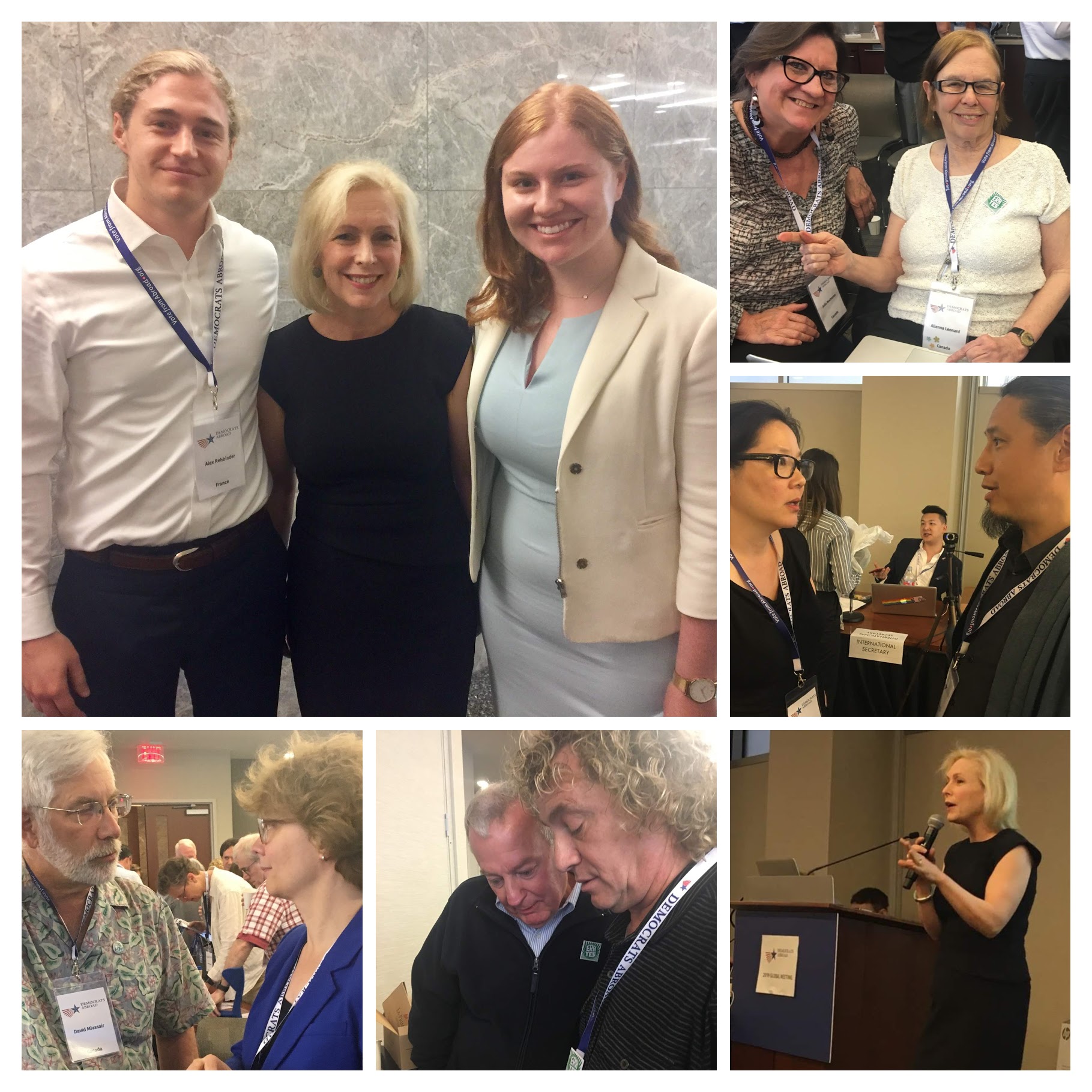 After the call to order, we had the pleasure of welcoming Senator Kirsten Gillibrand (NY), who is also running to be our 2020 Democratic presidential nominee.  Senator Gillibrand shared her inspirational views on healthcare, the Green New Deal and how to effect change in our government.

Guest speakers also included Alabama Senator Doug Jones, who addressed the anti-abortion bill recently signed into law in his home state.  According to Senator Jones, "This extreme anti-abortion bill that is happening in the Alabama legislature is not a product of the will of the people, but a product of gerrymandering. I do not believe this bill reflects where the majority of people are at in Alabama. But this is a big part of the fight for Democrats going forward. I do believe there is more that unites us than divides us across America. We need to look for more opportunities to get us all moving in the right direction, and we need your help from Democrats Abroad."

DA Finland was admitted as an official Country Committee, Resolutions were voted on and guest speakers Frank Leone and Jeffrey Weaver presented a video from Senator Bernie Sanders (VT), who is also running to lead the Democratic ticket in 2020.  We topped off a busy day with a gala reception and dinner.  Special guest DNC CEO, Seema Nanda, spoke on the subject of cyber-security for the upcoming elections. 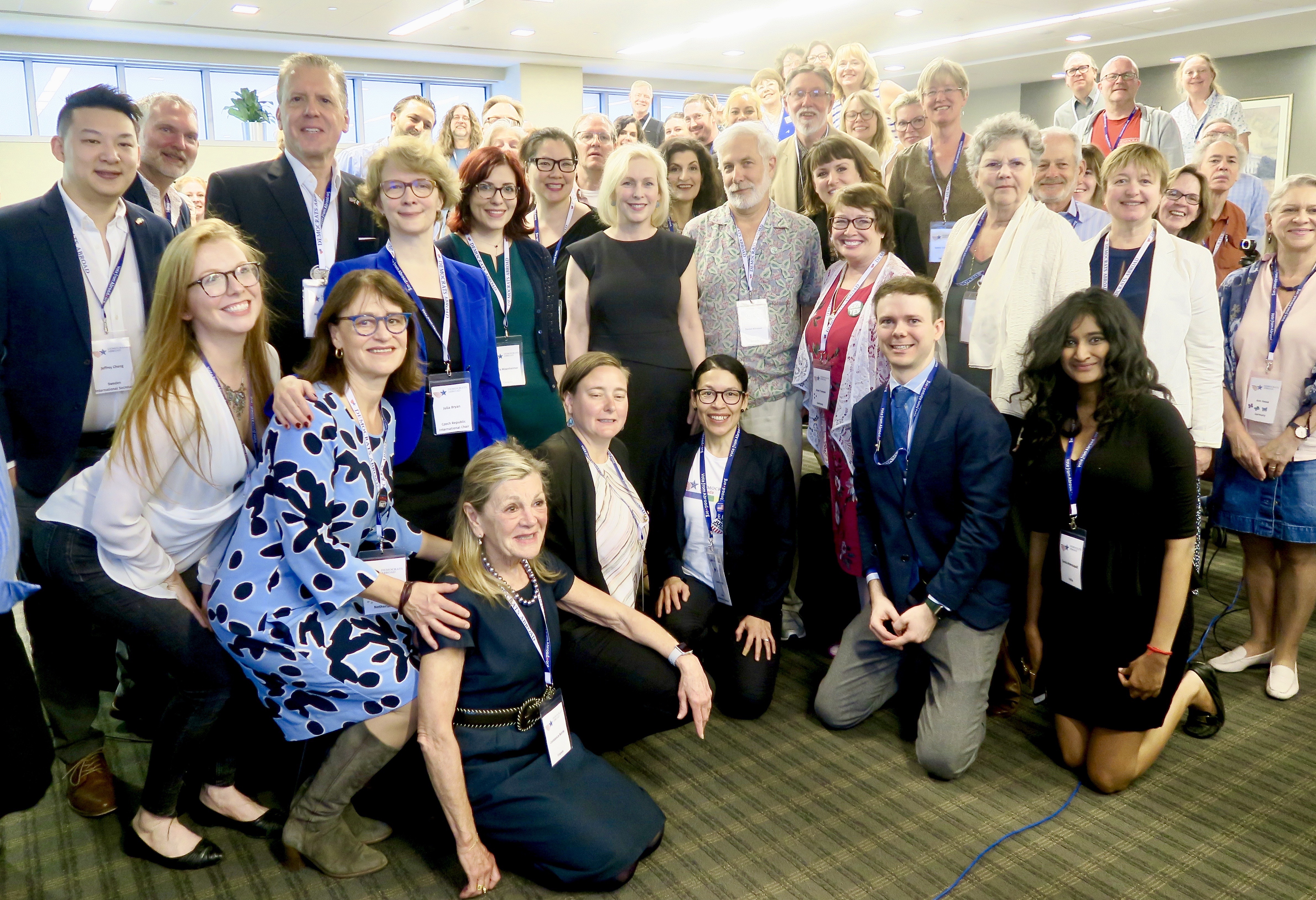 Watch this space for news of DAY 2!

Our annual Global DPCA (Democratic Party Committee Abroad or, simply, Democrats Abroad) meeting will take place in a few days in Washington, DC. France will be well-represented by your elected officers and Voting Representatives, either in-person or via Webex.  You can find more info on the 2019 Global Meeting here.

During the meeting our very own France Environment Policy Group will present a Resolution on Renewable Energy, drafted by Dana Powers and Jim Christiansen and submitted by DNC member Connie Borde.  A model of expertise in the area of renewable energy, this Resolution, if voted on, will provide an excellent springboard for our 2020 Democrats Abroad Platform, the document that lays out the goals of Democrats Abroad and defines who and what the Democratic Party is and stands for.

The DA France Nation Election Results are IN!

The Democrats Abroad France National Elections and Annual General Meeting were held on Saturday, May 11th at the American Church in Paris. We had an excellent turnout for the meeting and a strong response to our Early Vote/Absentee Ballot sent via email.  We are delighted that our membership showed their engagement by participating in these elections.

It is with great pleasure that we announce the Democrats Abroad France 2019/2020 Executive Committee. Congratulations to the new leadership team.  And, thank you to all who took the time to present their candidacy and run for office.

We would like to extend a deeply felt thank you to Joe Smallhoover and Salli Swartz, our outgoing Chair and Executive Vice Chair.  We appreciate your immense dedication and service to Democrats Abroad France.  It has been an amazing two years thanks to your commitment and leadership.

Thank you to everyone who attended, participated in and helped to organize these elections!

We look forward to a busy and productive 2019/2020 where we achieve our objectives as Democrats Abroad France to build, engage and mobilise our membership and to GET OUT THE VOTE in 2020 to flip the US presidency and Senate BLUE!

It is time for our bi-annual election of National Democrats Abroad France (DAF) officers.  See the candidates running for Leadership, here.

All members of Democrats Abroad France are welcome to attend and vote in the DAF National Leadership Elections on May 11 In addition to attending the in-person Election Meeting on May 11, all DAF Members have had the option to vote early via an online absentee ballot made available via email. This is to encourage DAF member participation from all across France even if they cannot attend the Meeting on Election Day. The absentee/early vote ballot closes end-of-day on May 8th.

In the event of ties, the DAF Elections Board may elect to conduct an immediate run-off election to break ties, time and other conditions permitting. In such case, all members of DAF registered and in attendance in person at the Election Meeting will be allowed to vote in a run-off election.

Early/Absentee voting in the DA France Elections closes May 8th

Your Early Vote/Absentee Ballot Has Been Sent via Email

Voting in the DA France Leadership Elections is Open

Early Vote/Absentee Ballots Have Been Sent via Email

Democrats Abroad France stands in solidarity with the people of Paris and of France as Notre Dame burns this evening. We honor the firefighters and police for their efforts to save this extraordinary edifice, appreciated around the world as a symbol of French history, culture, art and humanity and acknowledged for its beauty.

We encourage the Americans of France to join our French friends and families in the effort to rebuild Notre Dame, as President Macron has pledged the French Nation will do.
+

Our members have elected their local leadership for the twelve DA France chapters!

Congratulations to the new Chapter leadership and thank you to the outgoing leaders who have contributed their time and energy to build DA France and to power the Blue Wave in 2018.

Please take a moment to scroll down and meet our local leadership teams in Paris, Toulouse, Marseille, Riviera, Avignon, Grenoble, Lyon, Strasbourg, Bordeaux, Brittany, Normandy, and Montpellier. Click on the chapter name to visit their webpage for news and events. You can also find many DA France chapters on Facebook.

In 2019, we also welcome two new chapters to DA France - Paris and Montpellier! Paris? Yes! We now have in place the organizational structure for a chapter with a dedicated leadership team to engage and mobilize the progressive American community in the nation’s capital. We have a talented and motivated group ready to create a vibrant Paris chapter.

So, let’s start there…

The DA France Elections Board is pleased to present the list of candidates for the upcoming DA France National elections.  Please continue reading to see all of the candidates and their statements.

Early voting by online ballot will also be made available to DAF members via email. This is optional. You will receive your Absentee/Early Voting ballot soon with instructions on and deadlines for early voting.  One can either vote in person by attending the meeting or by voting early. Watch this space for more election information.

As a Democrats Abroad France member, you will receive email notifications of elections for our National Executive Committee as well as your local Chapter Leadership Committee.*

If you do not receive emails for the Call for Candidates and Election notice and Early Vote/Absentee Ballot, that means that you have chosen in the past not to receive emails from Democrats Abroad (or perhaps we do not have your current email address).

Your vote for our Country Committee and Chapter leadership will help ensure that we serve your needs and interests as a Democrats Abroad member.

Please note that all DAFrance members can attend the National Election Meeting** to vote in person. For more information on this meeting and to RSVP, click here. If you do not wish to receive our regular emails, you can still receive your ballot via email or postal delivery by contacting the DAF Election board at electionboarddaf@gmail.com.
* The Call for Candidacies with for the national executive committee can be found here.
** For information regarding local chapter elections, check with your chapter leadership or click here.
In addition, by opting to receive our emails, you can stay up-to-date on:
+