Widespread Effects of Family Separations on the Latino Community in the U.S. 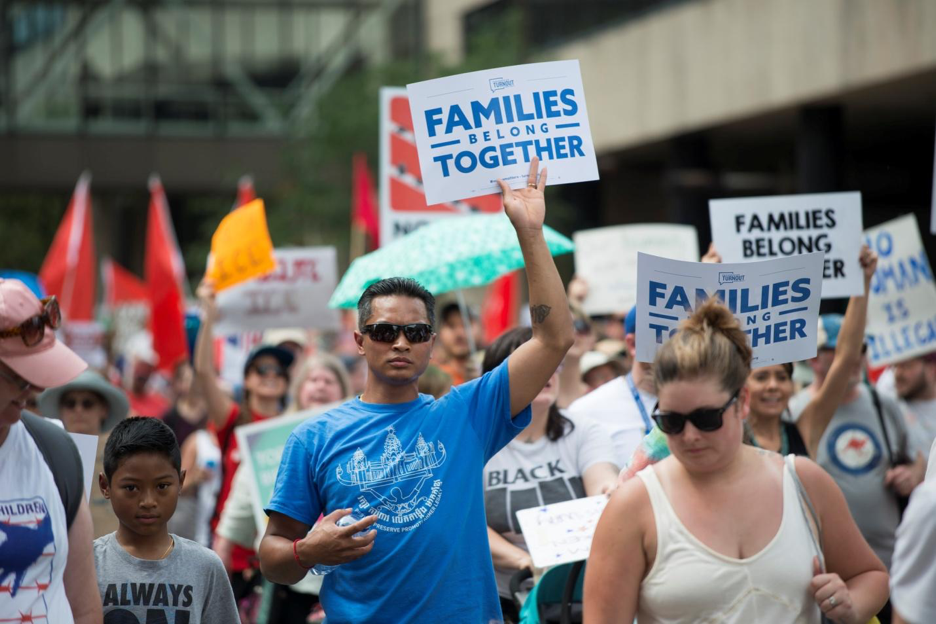 10,000 people marched against US family separation policies on June 30, 2018 in Minneapolis,MN.
Image: Fibonacci Blue on Flickr licensed under CC by 2.0.

As a second-generation American and daughter of a Chilean immigrant mother, I grew up with dinner table discussions about how my mother’s accent was the butt of a joke in the office that day. Though my mom was a permanent resident of the United States for 35 years and adopted an American lifestyle, she was often treated as an outsider by people whose families emigrated a few generations earlier.

After college, my bilingual capabilities led me to my first non-profit job working with the Latino community. I spent 4 years equipping Latin American immigrants with the skills to be successful entrepreneurs at a microfinance organization in Minneapolis, Minnesota. After that I spent two years with the American Red Cross managing a regional program focused on bilingual disaster services for the Latino community.

I've worked with Latin American immigrants and refugees fromallsocio-economic levelsand strata of society.My work cemented in me the truth that our community is not a monolith. Each story of immigration is multi-faceted. Each family is unique in their reasons for making a new home in the US. Each individual feels a different level of pride in their heritage as an American and as an immigrant.

For recent Latino immigrants and refugees, there is a deep community distrust of government and international NGOs. Communities across Latin America have histories of being taken advantage of by people claiming to offer help. When I showed up with the Red Cross after a 3-alarm fire in San Francisco in 2013, Spanish-speaking families left homeless by the fire were hesitant to speak to our disaster response teams, much less claim the help they needed.

Part of my work was to preach the Fundamental Principles of the Red Cross from the rooftops. I appeared on Spanish-language radio and TV shows to speak about Humanity, Impartiality, and Neutrality. I explained how the Red Cross cares for disaster victims regardless of their legal status. We wanted Latino disaster victims to accept resources like food, clothing, and provisions, without fear. We wanted to avoid families ending up in the streets. Our work was possible because their humanity was more important than their documentation.

With the enactment of the Trump administration’s “zero tolerance” policy at the Southern border of the United States, Latin Americans entering the United States are receiving the opposite treatment.

Central Americans are arriving in record numbers as families from Honduras, Guatemala, and El Salvador flee violence at home. Upon arrival, 3,000 children have been removed from their parents and put into detention across the United States. Parents of some children still in custody have already been deported.

The trauma that these families are forced to go through is multi-layered.

First, these families are already fleeing disaster. They have found their home countries so uninhabitable that they have made a long and dangerous journey to arrive at the U.S.border and have presented themselves for asylum. They accept the risk because their very lives depend on it. For example, El Salvador is currently experiencing a homicide epidemic, while in Nicaragua it is simply unrealistic to expect families, students, and parishioners to live peacefully given theviolent government and paramilitary response to civilian protests.

Second, legal asylum seekers are being falsely identified and treated as illegal immigrants by border agents. Their families are being torn apart and sent to detention centers with no clear plan to put them back together.

Third, Latin Americans are being denied asylum at higher rates than others and being forced to return to violence. Consider that asylum denials for people from Ethiopia, China, and Nepal are all below 26% while asylum-seekers from Guatemala, Honduras, El Salvador, and Mexico are denied between 74-88% of the time.

Fourth, the highly-publicized activity at the U.S. border reinforces the attitude that Latin Americans don’t belong in the United States. This, along with POTUS’s own racist slurs, has led to a rise in physical and verbal attacks on Latino immigrants throughout our country.

From the asylum seeker to the naturalized citizen, every Latin American in the U.S.is suffering the negative effects of the Trump administration’s policies at the border.

The cumulative message from government officials that Latin American families don’t belong together is the Trump administration’s attempt to erode the humanity of Latinos in the U.S. It not only goes against our society’s morals and everything I’ve ever worked for, it demonstrates values that are un-American and inhumane.

It deepens our community’s prevalent distrust of government and my concern is that it will have the ultimate effect of reducing civic engagement among U.S. Latinos. As a Latina and an American citizen living abroad, this is scary since I’m afraid that the raised voices of Latinos and an increase in our community’s involvement in politics are perhaps the only things that will prevent it from happening again.

Every American must use their privilege to vote; we must speak out for protecting families and continuing the great American tradition of accepting and welcoming immigrants. That is why I'm voting from abroad in November.