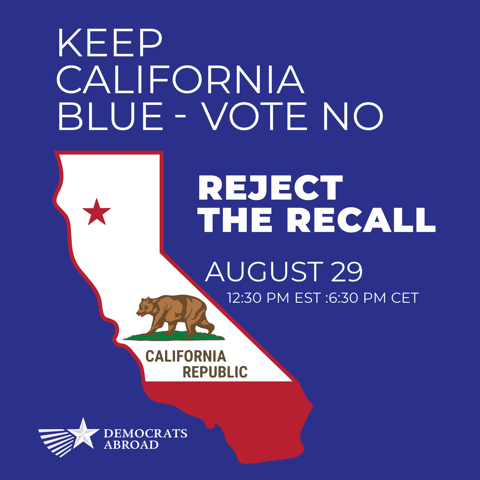 A special election on September 14th will decide the fate of California’s Democratic governor, Gavin Newsom. We Californians in Democrats Abroad can help ensure that California stays blue. Let’s fight this Republican power grab with our votes.

RSVP Below for the meeting link!

We’ll hear first Democratic Party leaders on the ground, including DNC Chair Jaime Harrison and California U.S. Senator Alex Padilla, and then speak with two distinguished guests who can join live, Lizzie Heyboer of the California Democratic Party and Otto Lee, DNC Representative and Santa Clara County Supervisor. A Q&A session will follow. You can submit your questions in advance to the speakers by sending an email to [email protected].

Voter assistance will be provided after the event by DA volunteers so you can get all your questions answered.

If you’re a California voter (or you have friends from California), please RSVP below today!

Based in San Francisco, Lizzie Heyboer currently serves as the California Democratic Party’s Organizing Director. Lizzie most recently led organizing efforts for Joe Biden’s campaign in California for the general election. During the 2020 primaries, she joined Elizabeth Warren’s presidential campaign, training volunteers and staff on how to build grassroots organizing power across 15 key states.

Prior to 2020, Lizzie worked for NextGen America as the National Training Director, focused on youth organizing. While at NextGen, she trained and developed young organizers and volunteers.

Otto Lee is currently the only elected DNC Member from Silicon Valley and was recently elected to serve as one of the five County Supervisors for Santa Clara County. When he was mayor of Sunnyvale, he was dubbed the “Green Mayor” for his advocacy of environmental issues.

Otto’s family immigrated from Hong Kong to Berkeley, where he attended high school and college, and formed the foundation of his progressive values. Following the footsteps of his grandfather, a WWII Navy veteran, Otto served and retired from U.S. Navy Reserves after 28 years as a Commander. His most notable assignments include: Commander Naval Air Forces Pacific Headquarters overseeing logistics support for six aircraft carriers; Commander Naval Forces Korea serving in joint exercises with the South Korean armed forces. In 2009 he was deployed to Baghdad and served as Chief of Drawdown Materiel Disposition Policy.  His work focused on base closures and material drawdown authorities; he directed transport and redistribution of vital resources to Iraqi hospitals, prison, schools and generators to the Iraqi Foreign Ministry after the 2009 massive bombing.  He helped close over 200 bases, in addition to surviving a few close call encounters, and was awarded the Bronze Star.

Otto received a B.S. in chemical and nuclear engineering from U.C. Berkeley, J.D. from U.C. Hastings, and LL.M. in Public International Law from University of Leiden, The Netherlands. He has been practicing international intellectual property law in Silicon Valley for over two decades.

Democrats Abroad is busy contacting Californians around the world and reminding them to vote NO in the September 14th recall election. Help us fund our outreach efforts, which include extensive emails, texts, ads, and events like this one, by donating at https://www.democratsabroad.org/keep_california_blue. A contribution of $20.21 (or more!) will help us reach over 50 overseas voters and is greatly appreciated!