LGBTQ+ Caucus Statment Regarding the Aftermath of the Dobbs Decision 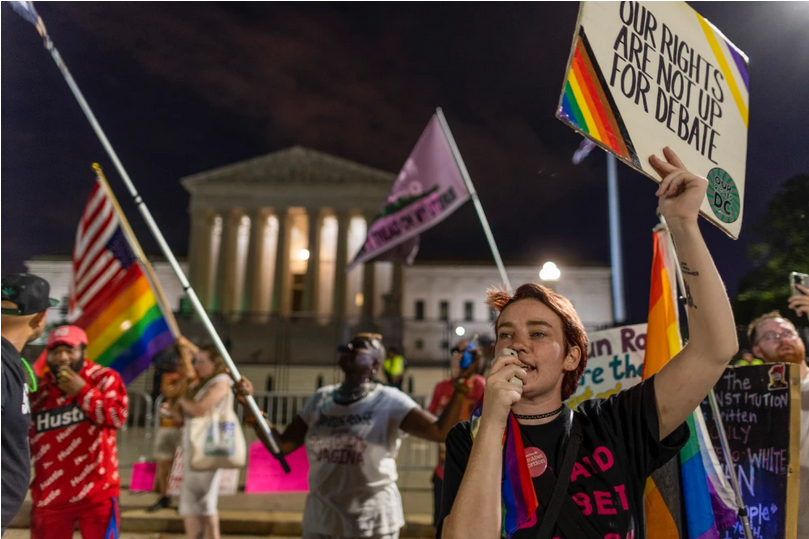 Last Friday, the Supreme Court issued a chilling decision overturning Roe, striking down a well-established precedent of 50 years, and for the first time ever, taking away a Constitutional right.  It will not be the last time.

This decision will have an immense and immensely negative impact on the bodily autonomy of women (as well as transgender, non-binary, and gender nonconforming people who can give birth), their right to seek and obtain affordable health care, and their ability to control their own reproductive systems.  At least 26 states have passed restrictive bans and criminalized the efforts of both individuals and doctors to administer the health care that is in the best interest of the patient and have even curtailed the right of the patient to make decisions in their own best interest (1). And now, both Mike Pence and Mitch McConnell are indicating that they will not rest until this ban is nationwide.

It goes without saying, but let us say it anyway, loudly and clearly:  this decision is deplorable and dangerously regressive for all Americans.

But this decision affects not only women, transgender, non-binary, and gender non-conforming people and their health care providers, in no small part because what was overturned on Friday was not merely the right to abortion, but rather and arguably, more importantly, the right to privacy. Fundamentally what Roe affirmed was the finding first articulated in Griswold that although it is not explicitly stated in the Constitution, a right to privacy does exist in the penumbra of the First, Fourth, Fifth, Ninth, and Fourteenth Amendments. That right to privacy is now very much in doubt.

Why does this matter to the LGBTQ+ community?  Because subsequent cases–most notably but not only Lawrence and Obergefell–are predicated in substantial part on the right to privacy.   Lawrence effectively decriminalized homosexuality in 2003, nullifying the remaining sodomy laws in the states, on the premise that what one does in one's own private bedroom is one's own private business, and the state does not have a compelling interest in regulating that.   Obergefell established marriage equality as the law of the land, in part on the premise that the married couple enjoys privacy and the state has no compelling interest in limiting that right to only certain persons.

In his concurring opinion, Justice Thomas writes that "For that reason [which he articulated in the preceding paragraph], in future cases, we should reconsider all of this Court’s substantive due process precedents, including Griswold, Lawrence, and Obergefell.”  Tellingly, he does not mention Loving (2), but other right-wing extremists in state legislatures have already done so.

With this one single sentence, Justice Thomas is inviting states and other interested parties to challenge those findings, signaling that the conservative majority of the Court will hear and likely overturn the rights that are established by them, which is exactly what they did in the lead-up to this case.    The dots are already there.   We must not fail to connect them.

And it is not a matter of IF, but WHEN.  Since Thomas is signaling to the states that they should try to pass laws to criminalize homosexuality or regulate marriage in some fashion or another, they will attempt to do so, perhaps as early as this fall and certainly after the November elections if republicans should acquire a legislative majority or trifecta at the state level.(4)

This means that is possible–probably unlikely but nevertheless possible–that by this time next year, in some states, it may once again be illegal to marry who you love, and it may even be illegal to make love to your partner.  It may even be illegal to use contraception, which is, of course, not merely a matter of preventing pregnancy but also a public-health issue.  This has additional consequences for all of the social and economic benefits that accrue to married couples–health insurance, elder care, end-of-life decisions, tax benefits, and even the status of children.

They have already come for the women; now they are coming for the rest of us.  We cannot afford to behave now like the characters in The Handmaid's Tale do in those cut-away flashbacks when they dispassionately worry that maybe something is wrong and maybe something is happening but dismiss the evidence staring them in the face as they naively believe that it cannot happen here.

One of the best ways you can support the Caucus right now in this organization-wide effort is to donate to the Amsterdam CanalPride event.   Every single cent of profit from that high-profile event will go towards getting out the vote from abroad.  All of the European media will be focused on us on August 6, so your $20 donation will help us immensely.  If every member of the Caucus donated $20, we would be able to reach tens of thousands of Americans living abroad who, for whatever reasons, do not vote.   Those thousands of votes can swing this election and forestall if not reverse further regression.

It's all too easy to reach for those poetic words "”First they came for the trade unionists…" or quote Franklin ("if we do not hang together, we will sure hang separately").  But simply citing these words is insufficient, a mere performance.  We must do more than act, we must all take concrete action NOW, for otherwise there will be no tomorrow, for democracy, for America, or for us.

We beg you, friends, do not despair, do not give into resignation, that saddest of all virtues, as Beauvoir says.   Our future, if we are to have one, depends on what we do right now.

(1) To be precise: 44 States prohibit some abortions. Thirteen have trigger laws that will come into effect now that Roe has been overturned; nine states have bills to amend their state constitutions to make abortion illegal. As we write this, nine states ban outright all abortions.

(2)  In the case of Loving, the court actually found two bases of unconstitutionality: violation of the fundamental right to marry within substantive due process and violation of the right to equal protection. While Thomas has indicated that he effectively disagrees that there is such a thing as substantive due process, and he takes a very narrow interpretation of the equal protection clause, his narrow interpretation of the equal protection clause prohibits all forms of racial discrimination (and apparently no other forms of discrimination) and so would seem to cover the Loving precedent.  If nothing else, this underscores his self-serving hypocrisy.

(3)  In fact, Dodds was not the only decision this session pertaining to this; the Court also held that any private home within one hundred miles of an international border could be subject to search and seizure by federal agents without a warrant if there was compelling evidence that it is harboring illegal immigrants.  Your private abode is no longer private.

(4) Lower courts will certainly stay these laws, at least temporarily, but those stays will make their way to higher courts and eventually to the SCOTUS.   This is what they want to happen, and it will happen, perhaps as early as October, when the Court hears its next slate of cases, for which they will issue opinions next June