Hot Flash from the DACH Women's Caucus: May 2022 Edition 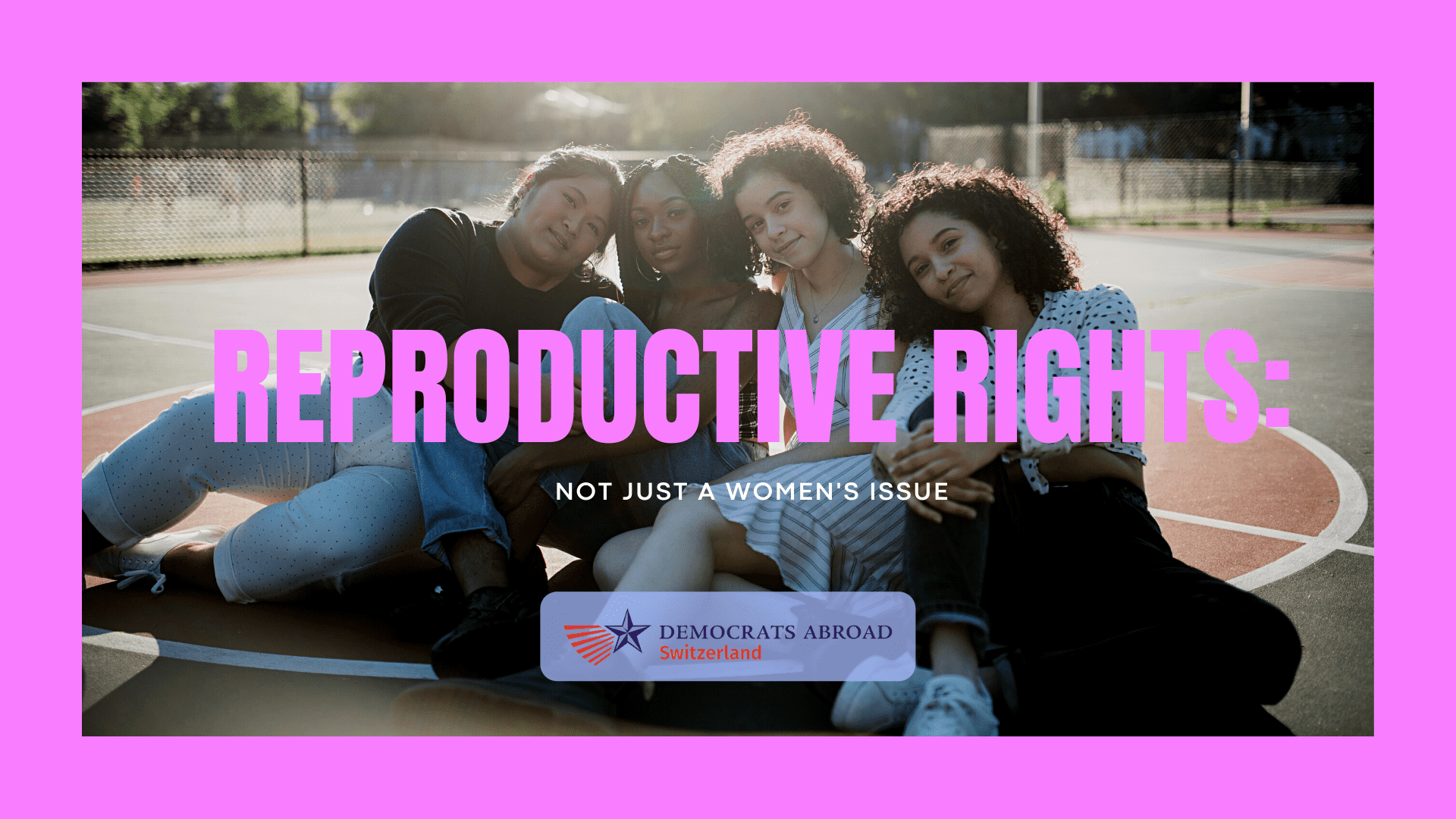 We're sure you saw the headlines when you woke up yesterday:

If you're experiencing some feelings in light of this news, join us for an open conversation on what a Supreme Court ruling overturning Roe v. Wade would mean to us and an inclusionary place to share your thoughts and fears.

WASHINGTON — The Supreme Court on Tuesday confirmed that a leaked draft ruling to overturn the landmark Roe v. Wade decision was authentic but not final, even as the disclosure triggered political upheaval with potentially broad electoral and legal consequences.

While protesters gathered outside the court, chanting loudly enough for members of Congress to hear at the Capitol across the street, Democrats led by President Biden vowed to make abortion rights a defining issue of the fall midterm elections. Republicans accused liberals of orchestrating the leak to intimidate the court while Chief Justice John G. Roberts Jr. ordered an investigation.

“If this decision holds, it’s really quite a radical decision,” Mr. Biden told reporters. Senator Chuck Schumer of New York, the Democratic leader, called it “an abomination” and Speaker Nancy Pelosi accused the court of “brazenly ignoring 50 years of its own precedent.” But House Republican leaders issued a joint statement calling it potentially “a decision that protects our most basic and precious right, the right to life.”

The draft opinion by Justice Samuel A. Alito Jr. was circulated among the justices in February with the support of at least five of the nine members of the court, but a final decision is not expected to be issued until June or early July. Such drafts routinely change as they are traded among the justices, who offer suggestions, make objections and at times even change their votes, so it is conceivable that the final result may yet be narrower than Justice Alito initially envisioned.

But the disclosure of his draft made clear that a bedrock of American law for the last half-century could be on the verge of being reversed. If the court follows through with some version of Justice Alito’s opinion, the constitutional right to abortion, first established by the court in 1973, would be negated and it would be left to the states to decide whether the procedure should be legal in their jurisdictions or not. The result would be a patchwork of different laws across the country, unless Congress steps in and sets a single national policy again.

Such a decision by the court would successfully culminate a decades-long movement by conservatives who argue that life begins at conception and that Roe invented a right that did not exist in the Constitution. At the same time, it would represent a devastating defeat for liberals who sought to guard women’s right to choose the procedure against years of efforts to chip away at the ruling.

The disclosure of a draft opinion in such a major case is unheard-of in modern times and has thrown the Supreme Court into turmoil as it faces a stunning breach of its traditionally secret deliberations. The court has largely been immune to the sort of leaks that have been common in other major institutions, but justices, clerks and others close to the court may find a new atmosphere of suspicion amid speculation about who is to blame and what their motivation is.

Chief Justice Roberts called it a “betrayal of the confidences of the Court” and ordered an investigation. “This was a singular and egregious breach of that trust that is an affront to the Court and the community of public servants who work here,” he said in a statement issued by the court.

In the same statement, the court confirmed that Justice Alito’s draft was real, while emphasizing that no one should assume that it will necessarily reflect the final decision. “Although the document described in yesterday’s reports is authentic, it does not represent a decision by the Court or the final position of any member on the issues in the case,” the statement said.

Nonetheless, governors and legislators across the country moved to prepare for a post-Roe era. Liberal states vowed to protect abortion rights in their jurisdictions, as was the case in California, where Gov. Gavin Newsom called for a state constitutional amendment, saying “we are going to fight like hell.” For their part, leaders in conservative states like South Dakota, Arkansas, Georgia and Indiana talked about calling special legislative sessions to ban the procedure as soon as the Supreme Court rules, and in Oklahoma, Gov. Kevin Stitt signed a bill barring abortion after six weeks.

Mr. Schumer announced that he will hold a vote next week on legislation meant to codify the Roe principles into federal law. But it would presumably be a symbolic action since he did not appear to have a majority of 51 votes, much less the 60 needed to overcome a filibuster, and Senator Joe Manchin III, the centrist Democrat from West Virginia, reiterated that he opposes eliminating the filibuster.

Polls have shown that most Americans support at least some form of abortion rights, even if they support selected limits. A survey by CNN in January found that just 30 percent of Americans wanted the court to completely overturn Roe, while 69 percent were opposed. Democrats over the years have failed to translate that broad popular support into commensurate political power in Congress and on the Supreme Court.

But they hoped the more palpable threat to abortion rights would now galvanize complacent liberals and independents to turn out in the fall. Ms. Pelosi and a host of other Democrats wasted little time fund-raising off the leaked draft ruling in hopes of changing the subject from inflation, the coronavirus and other issues that have dragged them down in the polls.

“I don’t say this lightly,” a fund-raising email sent in Ms. Pelosi’s name said. “This election just turned into the biggest fight for women’s rights in our nation’s history.”

Mr. Biden warned that a decision along the lines of Justice Alito’s opinion could unravel a whole range of privacy rights, including same-sex marriage. “It basically says all the decisions related to your private life, who you marry, whether or not you decide to conceive a child or not, whether or not you can have an abortion, a range of other decisions,” all of those could now be in question, he told reporters.

Justice Alito in his draft preemptively rejected that argument. “To ensure that our decision is not misunderstood or mischaracterized, we emphasize that our decision concerns the constitutional right to abortion and no other right,” he wrote. “Nothing in this opinion should be understood to cast doubt on precedents that do not concern abortion.”

For a party on the verge of a long-sought momentous victory, however, Republicans seemed less interested in celebrating than complaining. After working for years to install judges and justices sympathetic to their view of abortion, they focused less on the result than on the leak that they assumed reflected an effort to thwart it.

“One of the court’s most essential and sacred features was smashed just to buy the outrage-industrial complex a few extra days to scream nonsense about what the court might rule,” said Senator Mitch McConnell of Kentucky, the Senate Republican leader who worked closely with former President Donald J. Trump to confirm three conservative justices providing the core of the apparent majority.

It was not at all clear, though, that the leaker was a liberal. Some longtime court watchers speculated that a conservative might have reason to reveal the draft opinion in hopes of locking in wavering justices. Chief Justice Roberts had signaled hesitance to overturn Roe entirely, and if he could win over Justice Brett M. Kavanaugh, they could force a ruling that might uphold the restrictive Mississippi law in question without directly upending the prior ruling.

Such a result would nonetheless gut a key provision of Roe and its follow-on rulings. The Mississippi law bans abortions after 15 weeks of pregnancy, while current Supreme Court precedent guarantees the right to the procedure until a fetus is considered viable outside the womb, which is typically around 23 weeks.

Senator Mike Braun of Indiana was one of the few elected Republicans who offered a full-throated cheer for Justice Alito’s decision. “If the leaked opinion is accurate, then today is a landmark day for the sanctity of human life in our country,” he said. “I am 100 percent pro-life and pray it is true that the Supreme Court will follow through and save countless lives.”

Thirteen states already have so-called trigger laws, passed in the years since the Roe decision, which would empower them to ban the procedure immediately or within weeks, while five others have decades-old abortion laws on the books that could be restored. Several states would prohibit abortions after six weeks, earlier than many women even realize that they are pregnant. Abortion bans have been introduced in multiple states this year.

Such laws could affect hundreds of thousands of women each year. The number of abortions in the United States fell consistently from the early 1980s to 862,320 in 2017, although by some estimates it ticked back up slightly in following years. As a proportion of all women of childbearing years, abortions fell by more than half in the last four decades, from 29.3 per 1,000 women aged 15 to 44 in 1981 to 13.5 in 2017, according to the Guttmacher Institute, a research organization that supports abortion rights.

Even as abortions have become rarer, foes have become more assertive in challenging Roe, including Mississippi with its 15-week ban and Texas with a ban on the procedure as early as six weeks that can be enforced by private parties in court.

As the likelihood of Roe’s reversal sunk in around Washington on Tuesday, a blame game quickly began among the ruling’s supporters. Some pointed to former President Barack Obama for not fighting harder to fill an empty Supreme Court seat in his final year in the face of a blockade by Mr. McConnell, while others lamented Justice Ruth Bader Ginsburg’s refusal to retire, which allowed Mr. Trump, following her death in 2020, to fill her seat with Amy Coney Barrett.

Representative Alexandria Ocasio-Cortez, a liberal Democrat from New York, focused her ire on Tuesday on Senator Kyrsten Sinema, a moderate Democrat from Arizona, saying on Twitter that “we could protect Roe tomorrow, but Sinema refuses to act on the filibuster.”

Senator Susan Collins of Maine, one of the few Republican abortion-rights supporters in Congress, expressed anger at Justices Kavanaugh and Neil M. Gorsuch, saying their reported support for Justice Alito’s draft ruling “would be completely inconsistent” with what they told her about Roe being settled law or the importance of precedent before she voted to confirm them.

That, of course, led to a torrent of online criticism of Ms. Collins for believing Justices Kavanaugh and Gorsuch in the first place.