Paris Rallies Against Trump's Policies During His Visit

DAF was joined in this action by its partners, Indivisibles-France and PAGE-Paris. 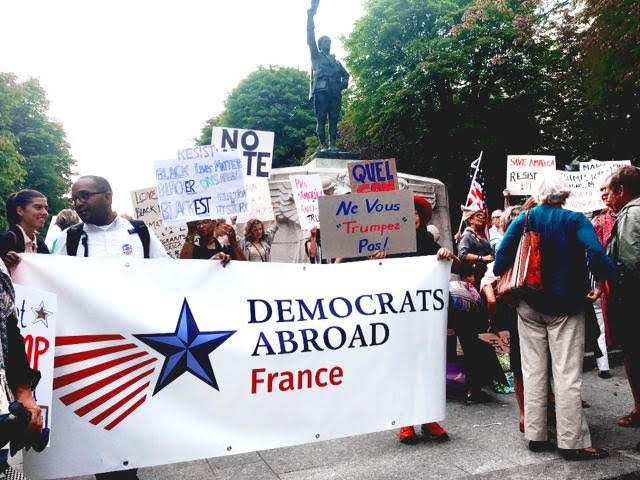 On 13 July at 19h, at the Place des Etats-Unis in the 16th arrondissement, several hundred Americans joined together to express their disapproval of Trump’s policies concerning the Paris Climate Treaty, the proposed repeal and replacement of Obamacare, immigration and refugees, and the rollback of regulations protecting minorities form discrimination. The rally took place as Trump dined at the Eiffel Tower with Macron. Consequently, all local media coverage of his dinner was accompanied by reports on the rally.

“Democrats believe that health care is a right, and that climate change is real. The efforts to take away affordable health care from 24 million people is mean-spirited and short-sighted,” said Joe Smallhoover, chair of Democrats Abroad France, adding that “we will also make our voices heard in support of the Paris Climate Accord, as well as on immigration, minority rights, and a host of other issues.” 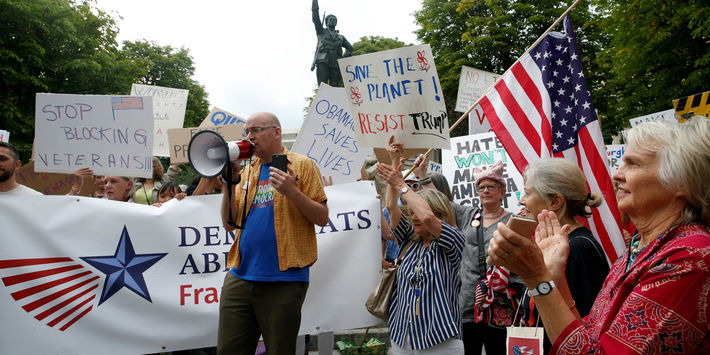 The official reason that President Trump was invited to Paris was to commemorate the 100th anniversary of the United States’ entry into the First World War, so it is appropriate that the rally took place near the statue in honor of the American Volunteers who helped French forces before the American entry into the war, situated in Square Thomas Jefferson

“When America entered the war, it began a century-long period of global engagement and helped to create a community of nations that work together peacefully towards mutually desirable goals,” said Julia Bryan, the International Chair of Democrats Abroad, “but the withdrawal from the Paris Climate Treaty sends a very different and worrisome signal”

It was difficult to organize a rally at this time, not only because of the high security that was in place that weekend, which marked the one-year anniversary of the attack in Nice, but also because, as a long holiday weekend, many Americans residing in Paris were away on vacation.  “We’re grateful for the support of our partners,” said Bob Vallier, a member of the DAF executive committee and one of the organizers of the rally, “they brought a lot of people and a lot of energy with them.”

Despite the modest turnout, the rally attracted considerable attention from the press, and was featured by major news outlet in France, and also caught the attention of the Washington Post, NBC, CBS, and CNN.  “Unlike in the UK, France did not have the equivalent of J.K. Rowling and other celebrities calling for mass protest in the form of an open letter,” said Vallier.  Parisians reacted to his presence with a great deal of indifference, which was its own form of protest.  “He loves attention,” said Lisa Kulick Aidan, one of the organizers of Indivisibles-France, “and the French didn’t pay him any—their attitude about the visit was a giant ‘meh’” 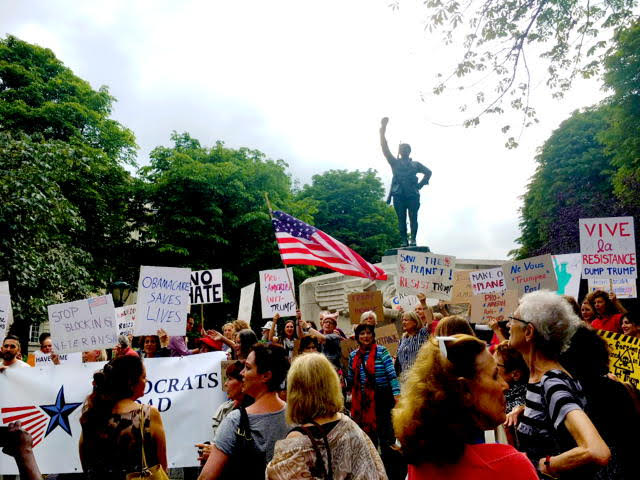 Democrats Abroad France emphasized that their action was not an anti-Trump, but rather a pro-American event.    “We Democrats are the opposition party, but the loyal opposition, so we are rallying to oppose the policy positions he has defended or proposed,” said Smallhoover, “and we are for the values that America and France, the oldest of allies, have shared for more than two hundred years, values that are today at risk.”   DAF also underscored that they were not opposing the invitation of Trump.   “Quite the contrary,” said Smallhoover, “we thank President Macron for inviting him so that we have the opportunity to express our opposition and make our voices heard,” adding that “we hope they have a productive meeting.”

Upon leaving, Trump, who once criticized Paris because his mysterious friend Jim didn’t like it anymore, announced that Paris was beautiful and that he would be back.  Democrats Abroad France and its partners will be ready for his return.