Remembering the Fallen on Memorial Day

LEST WE EVER FORGET

Memorial Day was indeed different this year. The staff at several US military cemeteries in France performed a small ceremony and afterwards laid the wreaths  of Democrats Abroad France on the graves of mostly Afro-American soldiers.  We were thus still able to honor the men and women who lost their lives defending our freedoms. Meredith Wheeler was able to be present to honor the two OSS Commandos downed in the Tarn. 60% of the WW1 soldiers buried in Suresnes had died in the Spanish Flu pandemic.

Private Mitchell Davis, Suresnes Cemetery, a Howard University Law Graduate and an Afro-American soldier who died of the “Spanish Flu” pandemic in 2018, is one of the few highly educated African-Americans that are being cared for at the cemetery.  He even wrote a book entitled One Hundred Choice Quotations by Prominent Men and Women of the Negro Race.

"Through avalanches of prejudices; industrial barriers; professional intrigues; legal technicalities; diplomatic effronteries, and political buffetings, the American Negro has, at last arrived before the public eye, as a factor not easily to be evaded"
~Mitchell Davis, One Hundred Choice Quotations by Prominent Men and Women of the Negro Race, 1917. 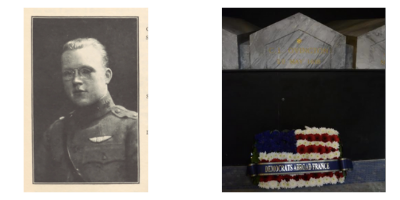 At the Lafayette Monument it was Carter Ovington, a pilot who was downed and was never recovered.  He has a tomb in the crypt but is a bit special in that he is
MIA as well.

At Belleau Wood, it was PVT Hercules Grays from the 369th Infantry Regiment also known as the “Harlem Hellfighters” and you can find more information on this unit here.

Another Afro-American, Private William Cuff was honored at the Oise-Asne Cemetery.  He was a recipient (Posthumous) of the American Distinguished Service Cross and the French Croix de Guerre with Bronze Star.