The first woman to run for Vice President was Democrat Geraldine Ferraro, who ran alongside former Vice President Walter Mondale in 1984. Ferraro was a former teacher, a lawyer, and Congresswomen from New York’s 9th District. Although slightly inexperienced, her spirited personality and oftentimes blunt remarks were seen as a major asset to the already trailing Mondale campaign. 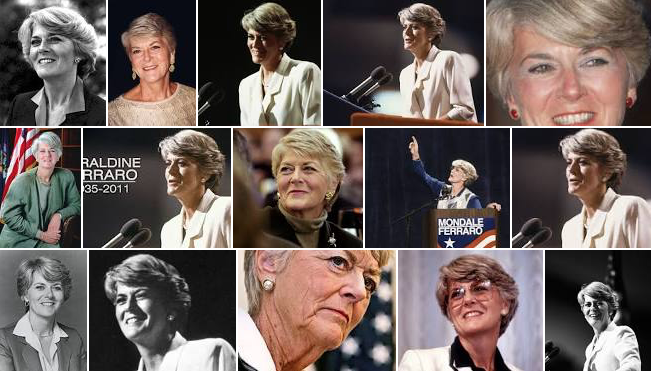 After her nomination, Mondale went from being down 16 points to nearly even with Republican challenger Ronald Reagan. Famously, when asked by Mississippi state Agriculture Commissioner Jim Buck Ross if she could bake muffins, she responded, “Sure, can you?” Although Mondale and Ferraro failed to win the White House, the choice was historic and a major step for women in politics. During her acceptance speech at the Democratic National Convention in San Francisco, she said, “There are no doors we cannot unlock. We will place no limits on achievement. If we can do this, we can do anything.”

It took 24 years for another woman to appear on the ticket. That woman would be Sarah Palin, self-described hockey-mom and Governor of Alaska. Senator John McCain’s campaign was struggling to compete with young, charismatic, social media savvy Barack Obama. Choosing Palin for Vice President was a risk, and not much of a calculated one. The normally intensive vetting process was rushed, and the McCain campaign failed to ask her basic questions on foreign and domestic policy. The result was an unprepared Sarah Palin, taking the world stage and stumbling through interviews with Katie Couric. Was it Tina Fey or Sarah Palin who said, “I can see Russia from my house?” The parody is too close to reality to remember. Yet, Sarah Palin was also a victim of sexism and misogynistic remarks, just as Geraldine Ferraro and so many other women have been. Much attention from the conservative media was focused on her appearance, with Rush Limbaugh continuously calling her “a babe.”

Interestingly, today, Senator Kamala Harris’ nomination as Vice President is being seen as “safe” by much of the media. She wasn’t a groundbreaking pick, like Congresswoman Ferraro, or a Hail Mary, like Governor Palin. Harris was Attorney General for California, a formidable opponent during the primary season, and is a current Senator. Even if Vice President Biden hadn’t promised to pick a woman to run alongside him, she would have easily been on his short list. However, Senator Harris is a woman of color, so having her on the ticket is anything but safe – it’s revolutionary, it’s historic, and it’s important, but it’s not safe. By choosing Harris, the Biden campaign was making a statement – they heard the people when they asked for change and they understood that women like Harris represented the future of the country.

If the past four years have taught us anything, it’s that just being a woman adds to political risk. Hillary Clinton was called a “nasty woman” by the man who would go on to be President, the man who was a racist reaction to Obama’s tenure as President. Not even a week into her nomination, Harris has been called “nasty” by Trump, and conservatives have stirred up racist conspiracy theories about her eligibility to be President, not unlike the birtherism conspiracies Trump championed during Obama’s campaign.

Yet if anyone can handle both sexist and racist attacks, it’s Kamala Harris. Harris was born to a Jamaican father and an Indian mother, making her both the first Black woman and Asian-American woman to run for Vice President.  She went to Howard University, also making her the first person from a historically Black college to appear on the ticket for a major party. After graduating from University of California, Hastings Law School, she went on to become Deputy District Attorney in Alameda County, California and the District Attorney in San Francisco, becoming California’s first District Attorney of color. Although Harris called herself California’s “top cop,” she was actually one of the state’s most progressive District Attorneys, according to San Francisco Public Defender Niki Solis, who explained that Harris often advocated for alternatives to incarceration.

As California Attorney General, Kamala Harris was a vocal defender of same-sex marriage and fought hard against Proposition 8, a law that banned same-sex marriage in California until the Hollingsworth v. Perry Supreme Court Ruling in 2013. She also prioritized environmental protection, securing a $44 million settlement to resolve all-natural resource damages, penalties, and response costs associated with the 2007 Cosco Busan oil spill.

Harris ran for Senate in 2016, winning 60% of the vote and carrying all but four counties. According to the Progressive Punch, which tracks Senators voting records, as of August 15th 2020, Harris is the 4th most progressive member of the Senate, above both Elizabeth Warren (5) and Bernie Sanders (10).

Senator Kamala Harris’ addition to the Democratic ticket historic. As both a woman and a person of color, she represents America as a whole and is a bright light for the future of both the country and the Democratic party. After Biden officially introduced Harris as his running mate, our future Vice President assured us that she would continue her fight for the people. She said, “30 years ago, I stood before a judge for the first time, breathed deep and uttered the phrase that would truly guide my career and the rest of my career, Kamala for the People…It is the people who lift have fought for as a United States Senator, where I have worked every day to hold officials accountable to the American people. And the people are who joe and I will fight for every day in the White House.”