Diversity, the inclusion and acceptance of people with different backgrounds, is an issue that dominates today's headlines and social justice debate. While diversity is not a new concept, there have always been those who resisted the ideas of inclusion and acceptance. But these people won’t stop OUR Party. We Democrats will continue fighting against the status quo to make our communities more inclusive and to learn from each other, moving forward – together – as a society. This idea carries on today, and we see this fight in today's debates about affirmative action, cultural diversity, sexuality, criminal justice reform and race. There is always work to be done, always progress and advancements to be made – and misunderstanding, intolerance, bigotry and hatred to fight. The Affirmative Action Committee will continue to do this work, make these advancements, and fight against these injustices. We are working for more acceptance, inclusion, understanding, and learning – within our Party, and within society.

Reflections On The 2020 Global Convention

This past weekend, Democrats Abroad (DA) members met virtually at its Global Convention and Global Meeting to debate and pass resolutions, discuss party business, and elect members to several leadership positions. Elections included voting representatives (“electors”) having chosen the individuals who form the delegation and are committed to attending the Democratic National Convention to formally nominate the Democratic presidential candidate, currently scheduled to occur in Milwaukee in mid-August.

The 2020 Delegate Selection Plan—the formal document detailing DA’s delegate selection process—asked electors to take into serious consideration the affirmative action traits of those DA candidates who identify with historically-underrepresented groups of Americans, and encouraged electing those persons to ensure that DA’s 2020 delegation to Milwaukee is a diverse one which accurately reflects its membership.

The Affirmative Action Committee (AAC), tasked with ensuring a fair selection process for historically-underrepresented members and indeed all candidates, reminded electors at the Global Convention of the affirmative action goals set forth in the DSP before voting was underway. Once voting ended and the affirmative action traits of the elected delegation were collected, members of the AAC responded positively to the diversity of its 2020 delegation:

“Democrats Abroad’s newly-elected delegation is determined to carry on the work of our state party. As our overall mission is to reach American voters living outside the U.S. to make sure they register to vote and do vote, we welcome fellow citizens of all backgrounds to join us in improving our country at this pivotal point. Congratulations to all those who were elected. The Affirmative Action Committee looks forward to following your accomplishments at the Democratic National Convention,” stated Sharon Manitta, an AAC member living in the United Kingdom.

​“Our membership uniquely comes for all corners of the globe and from all backgrounds. Ensuring that Democrats Abroad has a delegation that represents the broad and diverse make-up of our party is vital. By enabling transparent and well-informed elections from start to finish, this will allow for convention delegates and observers to see the different faces that make up the American fabric. And while we did not reach every affirmative action goal, I am thrilled to see so much diversity in our delegation from those individuals who were elected,” added Tre’ Shawn Griffin-Noordermeer, an AAC member based in the Netherlands.

Amerika Grewal, an AAC member in Fiji, commented, “American activist Marian Wright Edelman once said, ‘You can’t be what you can’t see.’ She was right. With our delegation’s impressive mix of fantastic members, I hope this encourages even more diverse candidates to run in the future, especially those with a disability. Our 2020 delegates are not only role models for our children, they bring years of experience and their unique perspectives from living, studying, and working outside the United States to the national convention. I look forward to the day when we exceed all of our diversity targets, because even as far as we’ve come, we still are missing the voices from key communities.”

AAC member Adrianne George, a current DNC member in Sweden who was just reelected to her leadership role, stated, “We had excellent delegate and DNC member candidates from every region. The number of young engaged people was heartwarming and their enthusiasm was contagious. I am confident that enthusiasm will be contagious at the convention and that our delegation is sure to make meaningful connections with other state parties with the goal to relay our unique issues and relay our progressive platform.”

The affirmative action goals stated in DA’s Delegate Selection Plan, and the traits achieved after completion of the delegation, are shown below.

Also shown below with blue star icons are where the newly-elected delegation votes absentee from abroad. 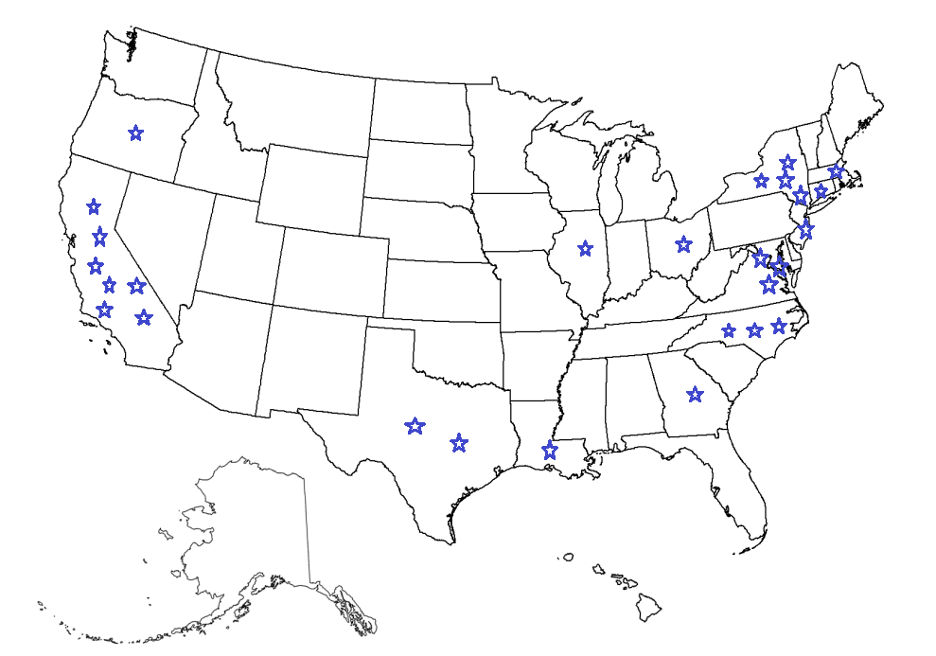 At the Global Meeting, electors also adopted a resolution introduced by Will Bakker, DA’s Regional Vice Chair for Europe, the Middle East, and Africa, and supported by members of the AAC. The resolution calls for a standing Affirmative Action Committee to be created within 60 days for the purpose of DA regularly taking a serious look at diversity and inclusion issues within the state party. The measure passed with overwhelming support by electors.

Any Democrats Abroad member with questions or comments is encouraged to send them to: [email protected].

If you’ve ever dreamt of casting a vote to formally pick our Party’s nominee for President of the United States, now is the time to fill out a statement declaring your candidacy to be part of Democrats Abroad’s (DA) delegation to the Democratic National Convention to be held during the week of August 17, 2020.

You may already be familiar with us and our work, but if not, we’re pleased to introduce ourselves as the Affirmative Action Committee and our purpose is to strive for diversity and inclusion within Democrats Abroad’s 2020 delegate selection process. In short, Democrats Abroad’s membership includes Americans of every background, every skin color, every age group, and so forth – and we hope our 2020 delegation reflects this reality. But in order to ensure we have a diverse delegation present at the Convention, we need diverse candidates to step up to run. Could that be you?

Being an elected delegate for Democrats Abroad and formally voting for the Democratic presidential nominee is a tremendous honor and among the most prestigious roles one can take in American politics. Four years ago, 300 candidates put their names forward to be a delegate, two-thirds of which had diverse traits. If there was ever a time to show the world that U.S. citizens living abroad are just as diverse as the homeland and just as anxious to boot Donald Trump out of office, this is that moment.

Candidate forms are available online now. If you’d like to be part of the 21-member delegation representing Democrats Abroad, please do not hesitate in filling out the candidate form and sending it back before the April 17th deadline. And while any DA member is eligible to run, those members who identify with any of the following are especially encouraged to run for delegate: women, African American, Hispanic American, Native American, Asian American or Pacific Islander, LGBT, youth (aged 36 or younger), and those with a disability.

We’re fired up about the delegate selection process and ask you to join us in spreading this message to other DA members you think might make excellent candidates to run as delegates. The last thing that Trump, Pence, and McConnell want to see are U.S. citizens from around the world showing strong support for our nominee. Let’s get to work!

Hear from past DA delegates about their experiences

The Affirmative Action Committee strongly recommends that any Democrats Abroad (DA) member who is willing and able to attend the 2020 Democratic National Convention in August immediately fill out the required Form of Notification for Candidacy to run as a delegate, and submit it before the April 17th deadline. We especially encourage members to run who identify with a historically-disadvantaged group such as African Americans, Hispanic Americans, Asian Americans and Pacific Islanders, Native Americans, those with a disability, those identifying as LGBT, and those who are 35 years old or younger (as of Nov. 3, 2020).
To hear from past DA delegates who have attended the Democratic National Convention, have a listen to the below audio clip where four DA members describe their experiences related to the delegate selection process and the being involved at the convention itself. The guests include: Adrianne George (Sweden), John Chudy (Guatemala), Salli Swartz (France) and Martha McDevitt-Pugh (Netherlands).

*Please note: on the recording, it mistakenly states the age to be considered a delegate candidate in the "Youth" category. The correct information should be aged 35 years or younger by the General Election.
Please feel free to direct questions or comments to: [email protected].

Diversity is our business:  The “Affirmative Action Committee” is the name our team was given by the DNC, in our initial work to increase the diversity of our delegation to the  Democratic National Convention in 2016. Every state party has one, including Democrats Abroad. After the 2016 Convention in Philadelphia the "Diversity and Inclusion Taskforce” has worked to increase the participation of “minorities” and the overall diversity of DA leadership worldwide. Click here to read about our committee members.

Black Caucus: Our newest caucus, the Black caucus is working on growing membership and raising awareness among people of color who live abroad to empower them to get out and vote, both this year and next. Join today!

Hispanic Caucus: The Hispanic Caucus concentrates on Spanish language voter outreach as well as engaging US Hispanic voters. If you are interested in joining, please contact the caucus at [email protected]

LGBT Caucus: LGBT Americans living overseas are active in all levels of leadership throughout DA. Many committees organize groups to participate in local Gay Pride marches, including info stands and voter registration booths. If you are interested, please contact the caucus at [email protected]

Women’s Caucus: The Women's Caucus is an active group with members all around the world. The caucus meets online regularly and run fundraisers, awareness workshops, and other activities. They also help promote and encourage country level women's caucus groups. Contact [email protected] for more information.

Young Dems: There have always been multiple groups of Young Democrats meeting within Democrats Abroad, from Young Professionals networking within an individual Country Committee to regional groups of Democratic leaders sharing ideas across borders. To find out about the present opportunities, and maybe start something yourself, please contact the DA Global Youth Caucus: [email protected]